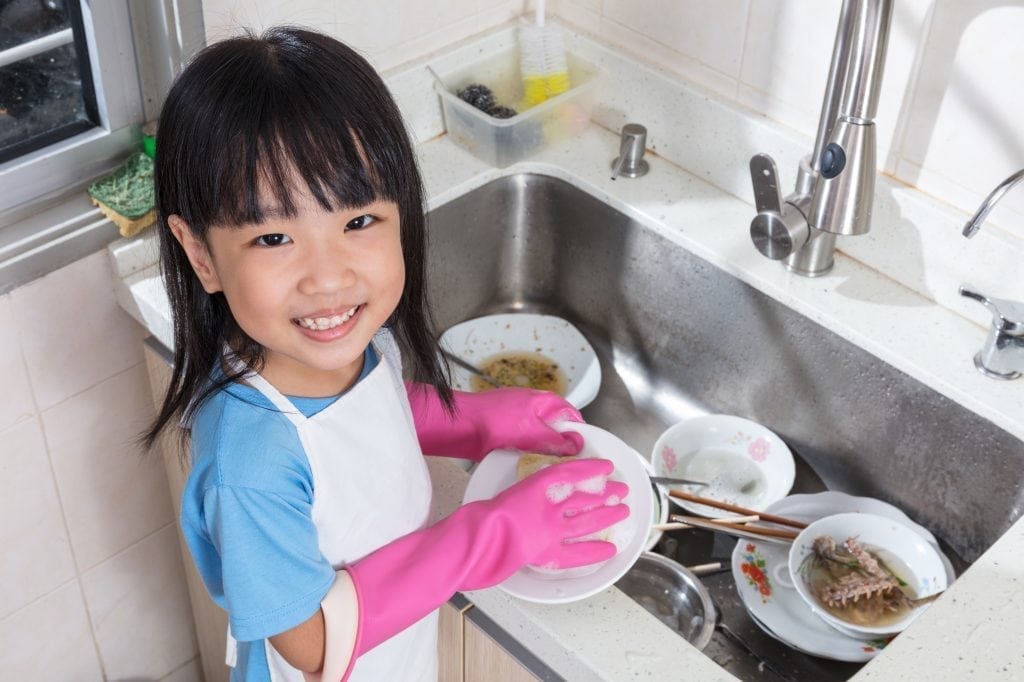 ’Tis the season for ambitious resolutions, fresh starts – and perhaps a bit more help around the house. But where to start? Are your children old enough for chores? Should you pay them? Are you sick of nagging – and re-doing their efforts?

When polling my friends with 5-year-olds about the topic, the responses were entertaining. A creative Eagle Rock mom had some success convincing her son that Tom Petty is “table-setting music,” while a Mt. Washington mama was in the thick of it.

Whether you’re implementing chores for the first time or looking for fresh ideas to motivate your kids, kick off 2018 with a few new strategies.

The Case for Chores

Let’s be honest and admit that, when kids are young, it’s often easier to take care of everything ourselves. From making their beds to setting the table, we can do it better, faster and with much less hassle. So why expend the energy to task our kids with helping out?

While early efforts may be more about teaching and training than getting actual timesaving assistance, giving kids chores at any age has ample benefits. Mundane daily tasks can help kids build character and self-esteem while teaching them to be responsible, accountable and self-reliant.

In her book “The Blessing of a Skinned Knee,” psychologist Wendy Mogel, Ph.D., says: “In addition to giving children a sense of their obligation to other people, doing chores gives them survival skills. By teaching our children a habit of responsibility at an early age, we give them the confidence to take on ever-more-complex challenges as they grow older.” 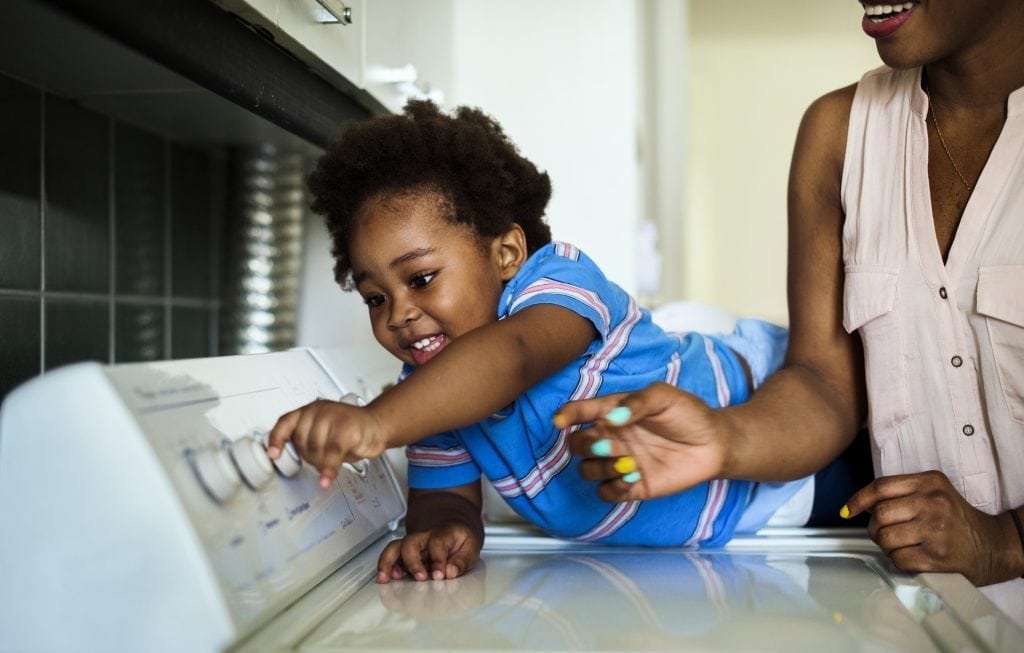 You may be surprised to discover just what a 4-year-old can accomplish. Around L.A., parents are teaching their tots to dust, wipe down surfaces, feed pets, water plants and even sweep – in addition to daily tasks such as putting toys away and tossing dirty clothes in the hamper.

Need some motivation for the dirty clothes? There’s a basketball-hoop hamper for that. Young kids are also surprisingly good at sorting laundry. They can match socks, sort colors and whites and fold washcloths.

Silverlake dad Brendan Bolton-Klinger even gets his 5-year-old son, Wyatt, to help with yard work. Wyatt also feeds the dog, sets and clears the table and puts his things away. But his favorite chore? “Leaf-blowing and picking up leaves is top of the list for him,” says Bolton-Klinger. “It’s pretty awesome to watch a 5-year-old with a leaf-blower.”

A Word on Re-Doing

Resisting the impulse to micro-manage and fix “mistakes” may be the biggest challenge when teaching young kids to do chores.

“It’s hard to fight the temptation to do things the way you believe they should be done,” Bolton-Klinger admits. “But it’s also really important to let kids feel the pride they get when you don’t correct them and you let them know that you trust them to do things on their own.”

When you’re tempted to re-do your kids’ efforts, just don’t, urges Murset, who considers this a teachable moment and takes a more practical approach. “When you assign a task to any child,” he says, “you also need to set expectations of what the finished results should look like.”

Would you ever just hand someone a shovel and say dig a hole? “No,” says Murset. “You’d say, ‘I need a three-foot hole dug in this location, and I need it done in an hour.’ If your child fails to meet the expectations you set, let them keep doing it over.”

Clear expectations and detailed directions are also a smart way to avoid nagging your kids, which can be a hard habit to break. In her book, Mogel reminds parents that “constant reminding, nagging or screaming leads to death – of your child’s sense of accountability.”

She encourages parents to be friendly, matter-of-fact, brisk and specific when instructing kids about what chores to do, and how. She also recommends having kids repeat back to you what you’ve asked of them to avoid misunderstandings and miscommunications.

Bolton-Klinger has a built-in strategy to avoid the nagging trap. “All chores are supposed to have an ‘ask only once’ clause,” he says. “Our goal is not to nag, but it’s tough when you’re frustrated,” he admits. That’s one reason many L.A. parents use some form of incentive to entice their kids into action with less hassle.

When kids are young, star charts can work wonders in the motivation department. Each completed chore gets a star, and when enough stars are accumulated, there’s a reward. The reward can be anything from a longed-for toy to an experience, outing or privilege. 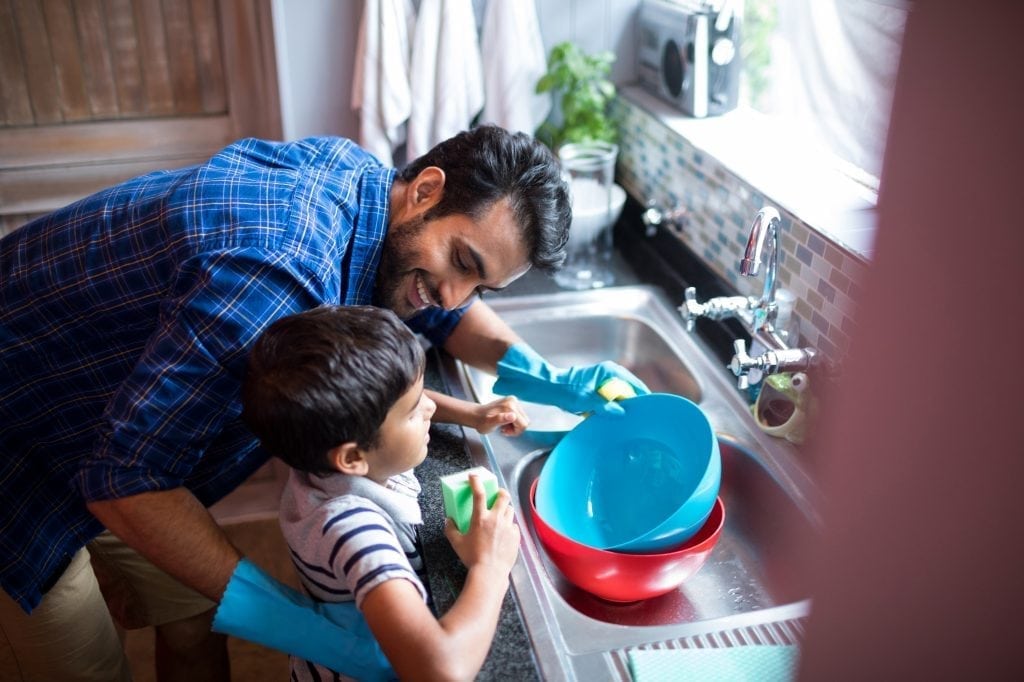 Think: movie, museum excursion, extra book at bedtime or even a few extra minutes of TV time. And the rewards don’t necessarily have to be attached to a star chart.

Motivating older kids without cash can be a bit trickier, but it’s possible. Screen time is a popular incentive, as is letting kids stay up an hour later on the weekend. Mogel recommends rewarding older kids with a little more authority, which may mean anything from choosing what the family will eat for dinner to permission to ride their bike to a friend’s house down the block.

Many parents pay for completed chores, and view the exchange as an opportunity to teach kids about work and money. Bolton-Klinger has an interesting system that combines cash with a star chart. His son, Wyatt, gets a star for each daily chore, and receives $20 when he accumulates 100 stars.

Wyatt’s parents decided to pay him for chores mainly to teach him about math, money and delayed gratification (saving versus spending). Does allowance entice this 5-year-old to do his chores? “I honestly think he’s more driven by getting a sense of pride that he helps around the house,” says Bolton-Klinger. “I think that makes him feel pretty good. He also, of course, is strongly motivated by earning money to purchase LEGOs.”

Another option is to put payments for chores toward a specific, coveted reward. Atwater 5-year-old Levon Curry is saving the money he earns from chores to buy a tablet computer. And while the reward is certainly enticing, he has just as much fun counting his money and deciding which piggy bank to put his cash in. Currently, he has no fewer than five piggy banks: three pigs, a LEGO and a double-decker bus.

Learning From a First Job

BusyKid founder Murset, who also happens to be the father of six and a certified financial planner, stresses the learning opportunities involved in paying your kids for chores.

“Kids earning an allowance for chores is basically an introduction into the working world. It’s their first job and you hired them,” he says. “Now, go help them learn how to save, share, spend and invest that money wisely. That’s what you’re really trying to do here. Chores just provide the means to get the money.”

Beyond suggesting chores based on age (and recommending a payment for each), Murset’s app is designed to help kids learn to manage the money they earn. When kids get paid for chores, they can decide how much to save, spend, donate to charity and even invest in the stock market – all of which they can do through the app. 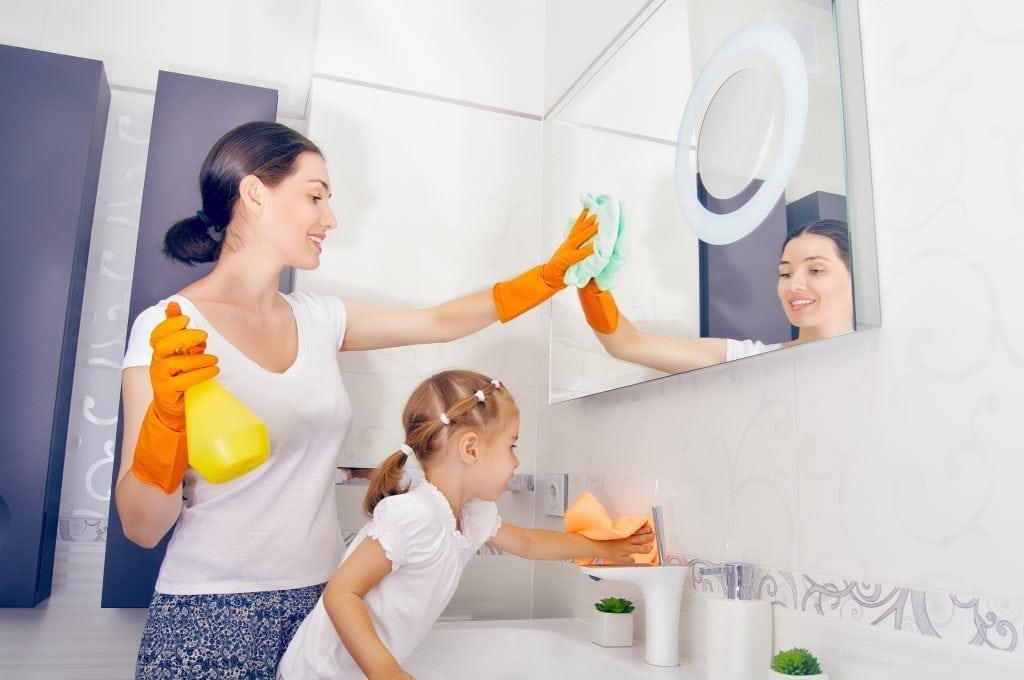 The mobile interface and empowering options for managing their money are especially appealing to older kids who are tapped in to technology.

Taking Cash Off the Table

Plenty of parents feel that kids should do their chores simply because it’s the right thing to do – not just an opportunity to make money. Even if you opt out of attaching chores to cash rewards, you can find ways to teach kids about earning and managing their money.

Some parents who don’t pay for regular chores offer their kids opportunities to earn money by doing extra, bigger jobs they don’t normally do. This could be anything from cleaning the car to helping with yard work or organizing the garage.

Whether or not you opt to pay your kids for helping out around the house, the character-building benefits of doing chores are difficult to debate. Sure, it takes effort, consistency and a heaping of patience to get your kids to do chores, but the end result is well worth the effort – and you might even get the dishes done.

Melissa Gage has been a Los Angeles-based freelance writer for more than 15 years and is the mother of one son.