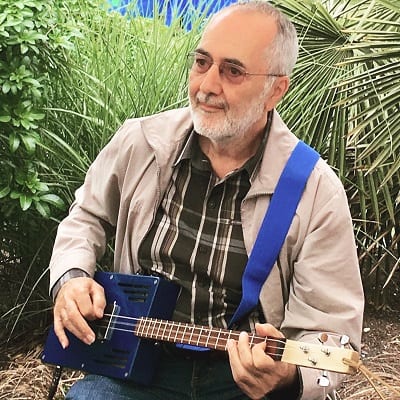 Raffi’s songs – from “Baby Beluga” to “Bananaphone” – remain popular decades after their releases. The iconic children’s musician continues to make new music at the age of 70. He recently released his 25th album, “Dog On The Floor,” named for his puppy.

It’s the third album in six years for Raffi, who returned re-energized after a 12-year hiatus between CDs. Every album, he says, lets him “take different chances and think out of the box.” This new album, for example, finds him playing three- and four-string guitars. Raffi admits to taking a great deal of care in creating his moving rendition of “Mary Had A Little Lamb.” “Simple songs can’t be taken lightly,” he explains. His version of the Beatles’s “Here Comes The Sun,” he says, was inspired by a Paul Simon cover he saw on YouTube.

“Dog on the Floor” ends with a new version of his song “It Takes A Village,” with themes of the power of love, celebrating life and inclusiveness that resonate throughout Raffi’s work. He credits Pete Seeger as a role model, calling him “a tower of strength.”

Raffi has long been an advocate for the environment and for children. In 2010, he started the Centre for Child Honouring, a nonprofit working to create a more peaceable, sustainable world. He doesn’t license his music for endorsements, despite lucrative offers, because he thinks children shouldn’t be targets for marketing. He has received the prestigious Order of Canada and the United Nations’ Earth Achievement Award for his efforts.

Making and performing music still excites Raffi. Parents, who often identify themselves as “Beluga Grads,” frequently tell him they are delighted and amazed that their children love the songs as much as they did. “I’m honored to have it be so enduring,” he says.