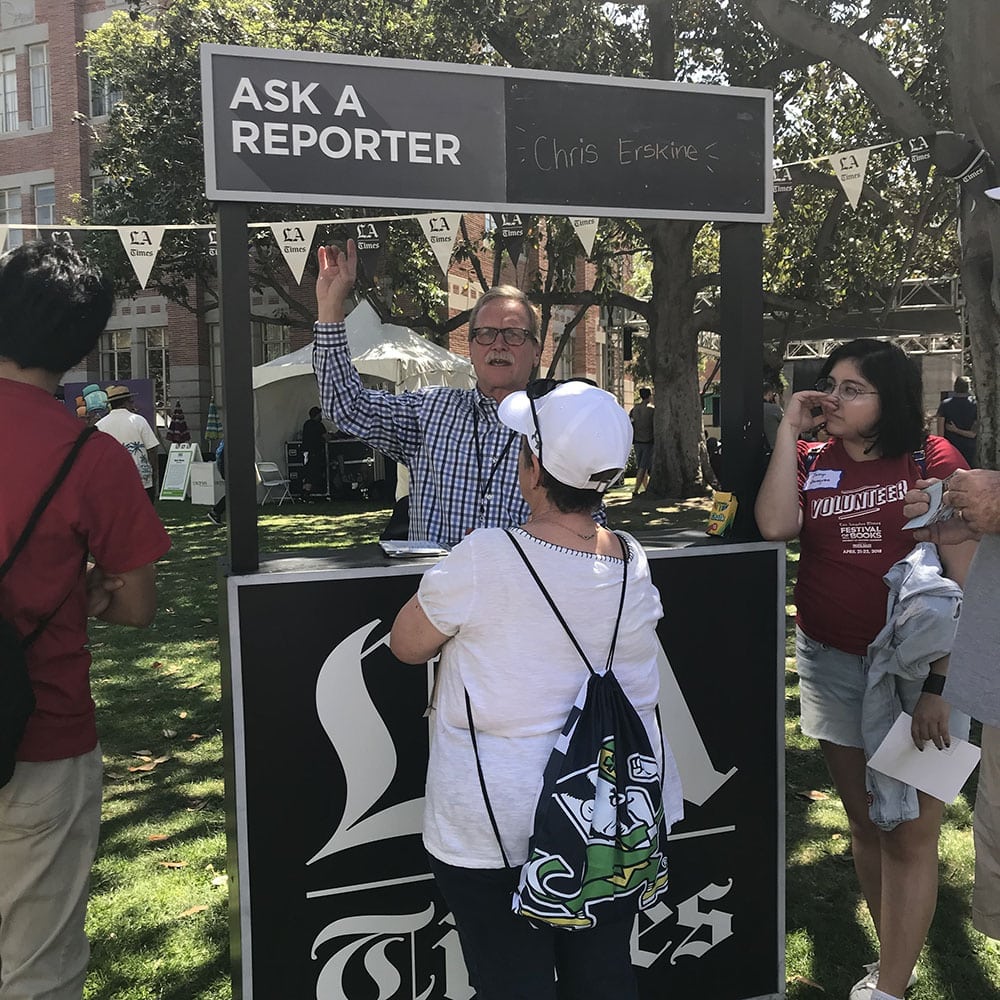 Chris Erskine of the Los Angeles Times at this year’s Festival of Books. PHOTO BY CASSANDRA LANE

My eyes were a faucet, leaking tears that dropped onto the newsprint and merged with the ink that made up Los Angeles Times writer Chris Erskine’s first column about the death of his oldest son, Christopher, in March. I tried to imagine the columnist at his writing desk, crafting raw grief into words as clear and beautiful as crystal, yet warm and relatable to the readers peering into his shock and pain.

Here is a man who has spent a long career writing humorous columns about his family. A Chicagoan, he became a parent in L.A. 34 years ago, and not one of his four children has escaped the notice of their father’s pen. Reading his account of the heartbreaking loss of one of those kids was almost too much to bear. And after finishing the column, I wasn’t able to simply wipe my tears, fold the paper and move on. I had an appointment, planned days before Christopher’s death, to interview Erskine about his new book, “Daditude: The Joys & Absurdities of Modern Fatherhood.”

While reading “Daditude,” a collection of 50 of Erskine’s favorite newspaper columns annotated with “tailpieces” from his kids and sometimes his wife, I had laughed out loud over his cynical, yet strangely endearing, way of looking at the world. His wry and accurate observations cover everything from the freeways and suburbs of L.A. to his marriage, the family’s 300-pound beagle, his love of baseball and, especially, his children: “At one point, the baby drops his trousers and parades around the living room, clucking like a duck and hugging people he barely knows. His eyes collect the candlelight. Everyone laughs.”

“Daditude” isn’t just funny. It deals with heartbreaking issues, including his wife’s cancer diagnosis in early 2017. But we end “Daditude” on a high note with the feeling that the Erskines will be OK. And then, they lose a son, a brother, a hero. In my talk with Erskine, however, I discovered that, even at the height of grief, this family presses on with love and humor and on the shoulders of a supportive community that includes fellow parishioners, family, neighbors and Erskine’s loyal readers.

I’m so sorry for your loss. I read your columns about Christopher and was in tears.

It’s a parent’s worst nightmare. You worry, you worry and you worry about your kids. We’ve lost [parents], but with Christopher it was such a blindsided awful thing. He was 32 and didn’t get to live a full life. Fifteen months ago, my wife came down with stage IV cancer, and we had sort of gotten through that and then we lose our son. Nobody should have a life like this. You think, How can it get worse? But then life answers in the most inconceivable ways. You start asking questions and why and what-ifs. There’s really no good answers. There’s just nothing sufficient. Talk about losing faith. But [my wife] is very tough and courageous and it’s been really something to watch. I admire her grit and her strength.

How were you able to write about Christopher so soon?

I wrote a eulogy that turned into the first column. I kind of just had to pour my heart out a bit because I needed to. Then the reaction I got from people who’ve been through the same thing – people who’ve lost two children – made me think, This should be a more exclusive club than this. I try to return emails. I got stacks of cards from readers, strangers coming up to me in Starbucks …. unbelievably kind and thoughtful. I have faith in a benevolent world. I have frustration and a big ball of grief, but my wife and I try to stay away from anger because I don’t think that solves anything.

People tell me, “I cried with you.” When tears blend, it somehow makes it easier. I don’t want to be the diary-of-the-grieving-dad column, but this has reminded me of the common humanity and willingness of people to reach out. It really has changed my view of society and people in general. We have people who are decent and thoughtful and beautiful.

You’ve been writing about parenting a long time. How has parenting changed?

I’ve been through sort of two generations of parenting. One was when I was 25, then again when I was 45, and all the moms had tattoos. In the first generation, none of the parents had tattoos. There’s a lot of overlap, but I think parenting has gotten more intense over time. Today, there’s less free time for the kids. Things were starting to get programmed when the older kids were younger, but there was still outside playtime. The screen time is the biggest difference. My oldest didn’t have phones until high school. Now, Fortnite has taken over.

We boomer parents get upset, but at some point, you wring your hands and you say, “We could play it together. Maybe I should give it a chance.” 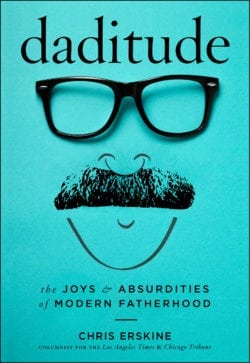 Congratulations on “Daditude”! What went into putting this new book together?

I worked with a local publisher, Prospect Books. We looked at the last 15 years of columns – 600 or so. It was a good process, and it gave me an idea of how the writing had changed a little bit. Early on, I was still trying to prove myself. Trying to be funny just to be funny. Now, I’m just a little more patient. More forthcoming. Before, I would just go for the joke. Now I’m interested in getting some place. The whole process of putting the book together took about three months. These are my favorite 50 columns. My publisher came up with the idea of letting the kids weigh in at the end of [each column] and I like it.

Baseball is huge in your family. You’re a Cubs fan, but your kids, thankfully, are Dodger fans, and you couldn’t convert them.

Yeah, they’re contrarians. I might as well get on the bandwagon. When the Cubs come to town, the rivalry is kind of fun. You question everything as a teenager. My sons had to sort of break away and not be fathered to death and that’s a natural thing. My youngest son, Jack, plays [baseball in high school], and this is the first year I’m not coaching him. It’s bothering me a lot more than it’s bothering him. I taught him everything I knew, but I didn’t have anything more to add.

What drew you to writing?

It always came very easy. Dad sort of pushed me a little bit. He would pick up a Chicago Tribune on a Sunday and, five hours later, he’s still reading. He loved reading and he had a great eye for columnists, and his love of newspapers became my love of newspapers. He said find something that you love. I started off covering sports because I love sports, but not like I love my kids.

Editor’s “tailspiece”: A few weeks after our talk, I saw Erskine standing inside the Ask a Reporter booth at the LA Times Festival of Books.

“Oh, there’s Chris,” I told my son, making a beeline for the booth.

The three of us chatted a bit, then my son and I stepped back to let Erskine’s readers, his fans, close around him again. “My husband and I have read you every week for years,” one woman said. “We love your column, and I just want to know: May I give you a hug?” Erskine stepped from behind the booth, and they embraced. As we walked away, I imagined that hug felt a bit like the morning sun.