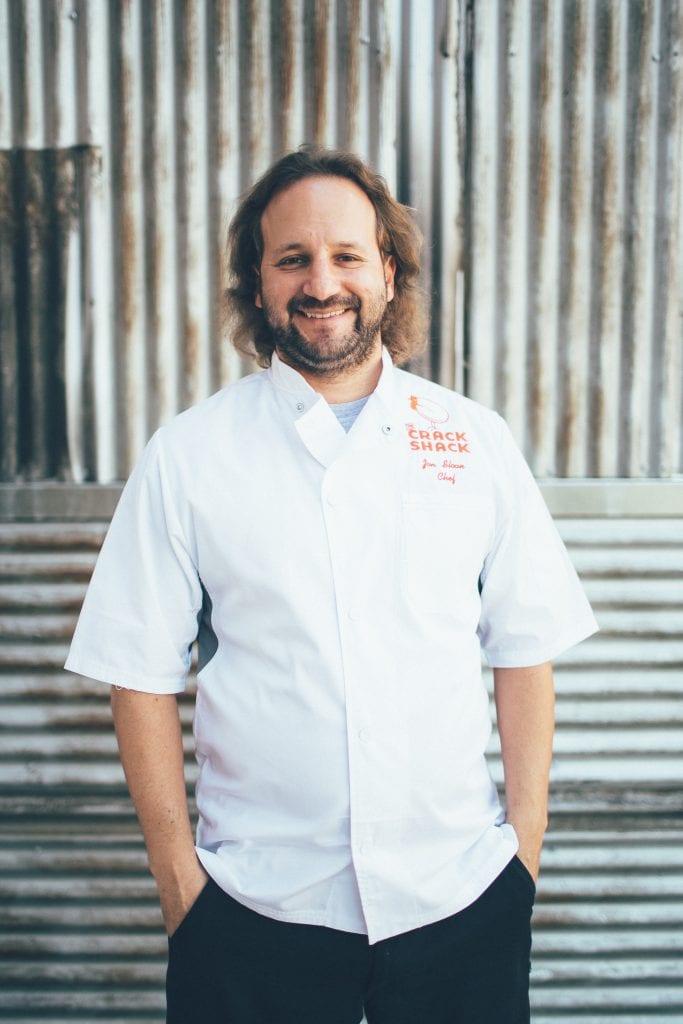 Jon Sloan, culinary director of The Crack Shack (which opened its newest location in Pasadena in November), is of Jewish descent and hails from the East Coast. That’s why this mashup of comfort foods, one from Jewish and one from Mexican tradition, felt like something he’d want to try. It didn’t hurt that The Crack Shack already features tasty posole broth for its California Dip sandwich, that there always seems to be leftover chicken around, or that Executive Chef Mike Gil claimed to have an amazing matzo ball recipe.

“That’s not something you hear every day,” says Sloan, adding that Gil was right about the recipe. “The matzo ball is made with the schmaltz that is super-flavored from roasting off the bones and making the chicken stock.”

When you roast the bones and chilis, you want a nice, deep caramelization for the best flavor. Despite all the chilis, Sloan says the dish isn’t too spicy, but that home cooks can decrease the amount of chili for a milder dish. Either way, make the broth well ahead of time so that you can cool it in the refrigerator before continuing with the recipe. The fat will rise to the top, making it easier to skim off.

Once the broth is ready, it’s time for the kid-friendly part of the cooking: the matzo balls. These can be large (as in the recipe) or tiny. Sloan says the key is to take it nice and easy. “Do not overwork them,” he says. “Nobody wants a dense matzo ball. It should have some jiggle to it. And when you’re poaching them, you need it to be in gently simmering broth.” This can take some practice, and your children can learn right along with you. “You can have the kids making the matzo balls with you and they can play around and figure it out,” says Sloan.

Like the posole, the matzo balls can be made ahead and refrigerated. When you’re ready to eat, warm up the posole, poach the matzo balls and put everything together. Set out little bowls of garnish, and everyone can have their dinner just the way they like it. “It’s nice to have some raw, crunchy things to put into the soup because texturally it creates a contrast,” Sloan says. “Just have fun. The more fun you have with it, the more fun it’ll be sitting down and enjoying it.” 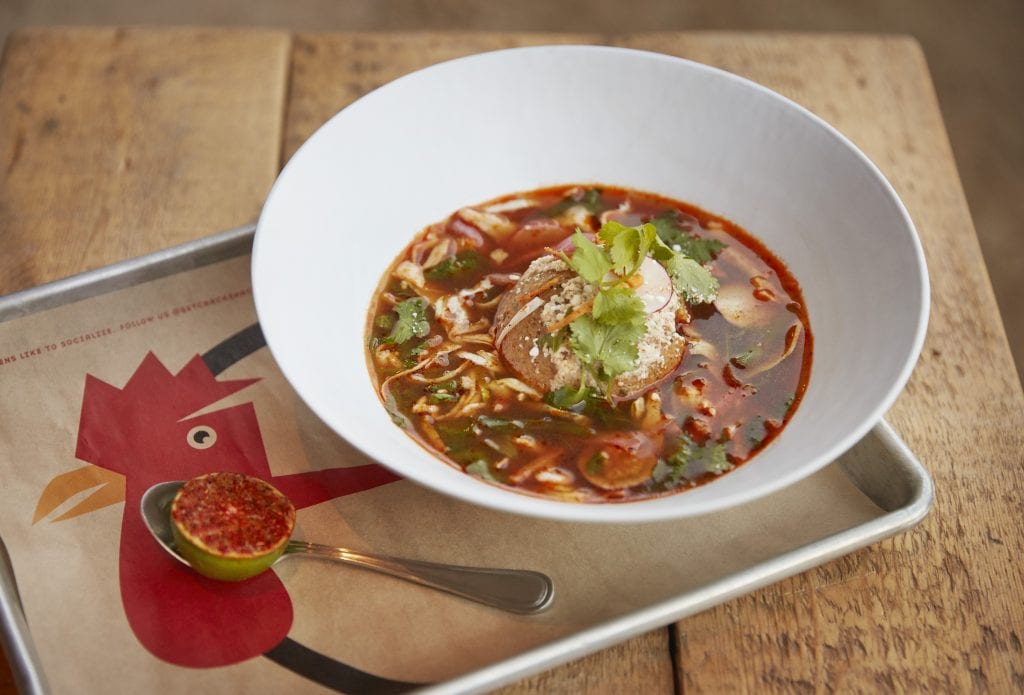 1 carrot, peeled and cut into chunks

For the Matzo Balls:

Make the posole: Preheat the oven to 450 degrees Fahrenheit. On a sheet pan, toss together the chicken bones, poblanos, jalapeños and green onions in vegetable oil. Roast for 20 to 25 minutes until the bones are golden brown and the vegetables are well charred.

Meanwhile, in a large stockpot, sauté the onions and carrots in vegetable oil over medium-high heat until well browned, five to seven minutes. Add the tomato paste and cook for another two to three minutes until caramelized. Deglaze with the red wine.

Add the chicken bones, roast vegetables and remaining posole ingredients to the stockpot and simmer for at least two hours. Reserve any chicken fat that floats to the top to make the matzo balls. Strain the broth through a mesh strainer, discard the bones and vegetables and keep the broth warm on the stove. When you’re about to serve, season with more salt, black pepper and lime juice.

While the stock is simmering, make the matzo balls: Whisk together the eggs, chicken fat, cilantro and chili powder. In a separate bowl, combine the matzo meal, chicken bouillon, baking soda and baking powder. Fold the dry ingredients into the wet until just incorporated. Do not overmix! Cover with plastic wrap and chill for at least 30 minutes.

In a large, wide pot, bring the chicken broth or water and bouillon to a simmer. Roll the matzo dough into six balls, gently pinching together any cracks. Add the matzo balls to the broth, cover with a tight-fitting lid and simmer on low for 15 minutes.

Flip the balls, cover again and let cook for another 30 minutes. Remove them from the pot and allow to rest for at least 10 minutes before serving. Reserve the cooking liquid for another use.

To serve, place some shredded chicken and a matzo ball in each bowl. Ladle over the hot posole broth and top with garnishes as desired.