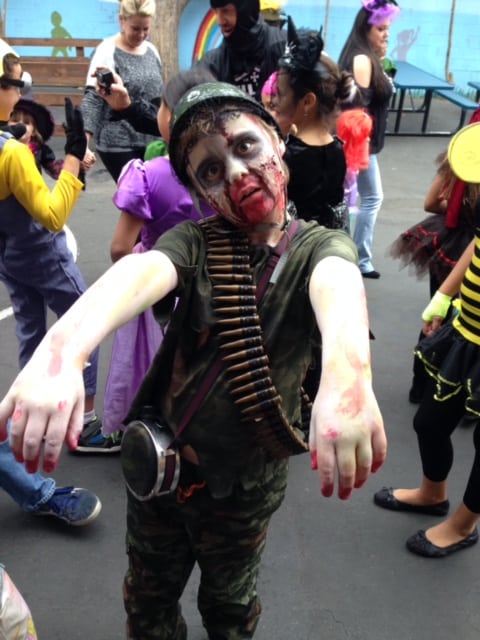 Maddox Volpone was transformed into a zombie army sergeant with help from his mom, Face Off host McKenzie Westmore, and his grandfather, makeup artist Michael Westmore. PHOTO COURTESY MCKENZIE WESTMORE

Last Halloween, McKenzie Westmore’s 9-year-old son, Maddox Volpone, wanted to be a zombie. Fortunately, she had resources – and creativity. “It started out just as a zombie,” says the L.A. mom, who hosts Face Off, an extreme makeup competition show on the SyFy Channel. “But then I said, ‘You could have a career choice.’”

Maddox settled on “zombie army sergeant” and the family got to work. Westmore’s father, legendary movie and TV makeup artist Michael Westmore (who appears with her on the show) did the makeup, and she and her mom went to an army surplus store to get combat fatigues to shred.

But you don’t need makeup professionals, or even professional supplies, to create a great costume for your child. Westmore recommends Party City, CVS and Rite Aid as great spots to pick up fun ideas for kids. “There are so many things right around the corner,” she says. Toss into your cart:

Even with just the pancake and eye liner, you could do a Raggedy Ann or Andy makeup with white face and black stitching. “I think there’s a lot that can be done with just those two [supplies],” Westmore says. Westmore uses her fingers, rather than sponges, to apply the makeup so that none is wasted.

At the grocery store, pick up:

You can apply egg white to the skin (with or without shredded cotton balls), let it dry and spread pancake makeup on top to create a creepy monster look. And you can mix the corn syrup and food coloring to make fake blood (which Westmore warns will stain clothes and skin).

In a pinch, shred and mark up an old set of your child’s clothes. “That can always make a good, scary-looking costume,” says Westmore. 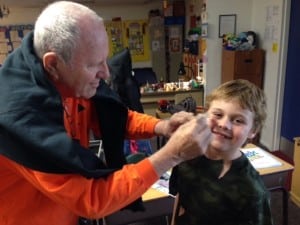 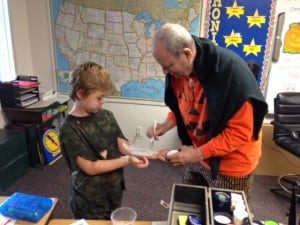 Maddox Volpone was fortunate to have grandfather Michael Westmore’s help when he decided to be a zombie army sargeant for Halloween. 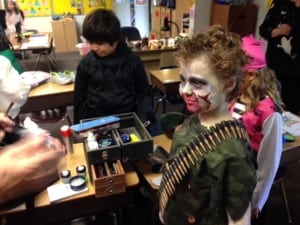 Simple makeup and some supplies from Army surplus have Maddox Volpone ready for Halloween.

The key is to have fun and involve your child in the process. “Sometimes kids have the best ideas,” Westmore says. “Not just costume ideas, but ways to really, simply do it.” Perfectionism and over-thinking are the enemies of a happy Halloween spirit. Westmore says Face Off, now in its ninth season, is another fun source of ideas (for older kids, as some of the makeup is pretty intense).

And when it’s time to take off that makeup? “One of the best makeup removers that I find is baby oil,” she says, adding that it is safe and cheap. “That’s one of my staples.”