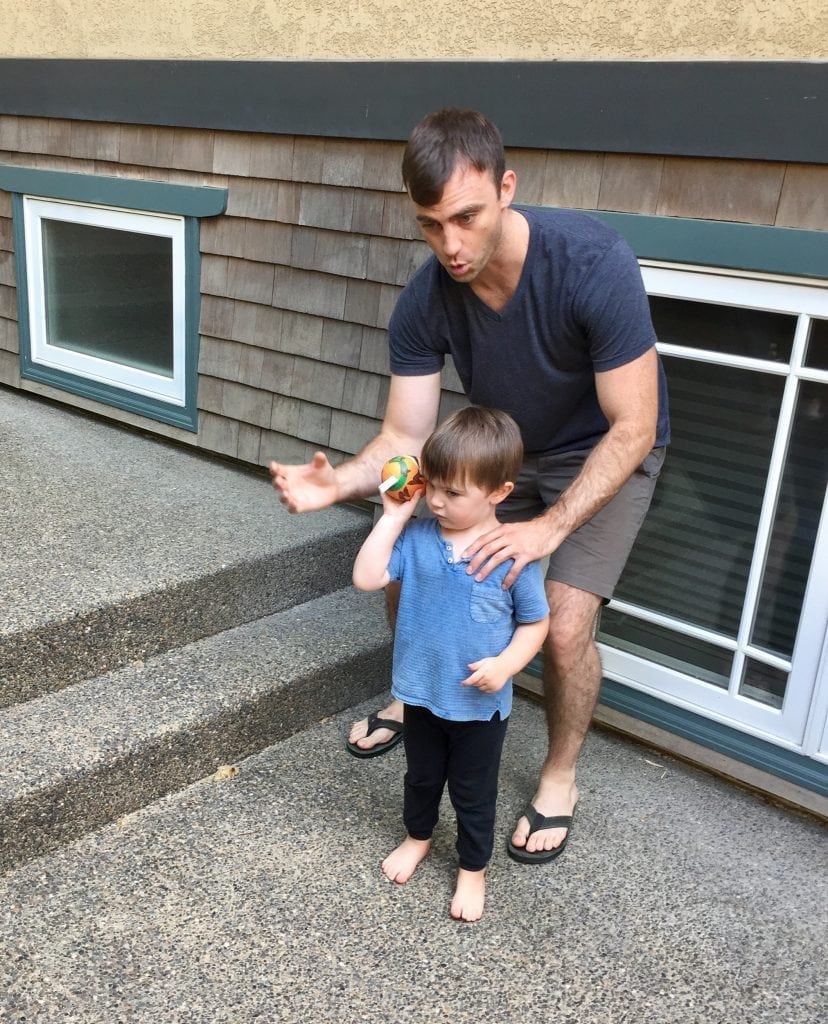 In many places, September is the month that welcomes fall, bringing a dramatic shift in weather and mood. In Los Angeles, however, it’s just another summer month – sometimes even the hottest of the year.

September also brings the start of football season, but for more than 20 years I had no reason to think about America’s sports obsession because Los Angeles had a lovely zero NFL teams. Then, last year, the pathetic and once-loathed Los Angeles Rams announced their return from St. Louis. And in January, the San Diego Chargers decided to move here as well, so now we have two.

September heat and September sports collided for my family last weekend during a brief trip to a park in Marina del Rey where Hank, dripping in sweat, may have discovered football as his next fixation. Uh oh.

Now he has me buying fun-size pigskins, and I am faced with two dilemmas. The first is whether to let Hank play football.

I had always assumed he would engage in European football (soccer) or, like me, would take to the easier-paced and safer game of baseball. However, Hank is already showing athletic talents that might lead in another direction. He is fast, and has the robust build of a toddler quarterback, which has afforded him the obvious nickname “Hank the Tank.”

But football involves accelerated helmet-to-helmet or helmet-to-turf blows to the head. The thought of Hank suffering a single concussion is difficult to stomach. But what about 20, 40 or 60 throughout a football career?

A recent Boston study of NFL players published in the Journal of the American Medical Association found chronic traumatic encephalopathy (CTE), a degenerative disease caused by repeated blows to the head, in 110 of 111 players’ brains. Many prominent figures in sports – including basketball great LeBron James – have admitted they would not allow their children to play football. My generation of parents, including LeBron (with whom I share a birthday) are the first to confront the possible removal of peewee football from our kids’ lives.

As Hank grows up, more will be learned about CTE and football. Perhaps then, a safer version of the sport will emerge for high schoolers, college players and maybe even the NFL. At that point, I would not hesitate to let Hank play because there is inherent value to the specific lessons of teamwork in football. But for now, we’ll just watch.

That brings us to my second dilemma. I am an indisputable fan of L.A.’s home teams, and will expect nothing less of Hank and his younger brother, Leo. But which of L.A.’s new NFL teams should we root for?

When I was growing up, both the L.A. Raiders and the L.A. Rams were long past their heydays. And when they left us, we were forced to root for NFL teams based on connections, obscure though they might be, other than geography. I chose the Kansas City Chiefs because my grandfather was a fan.

For those of you who know football, the Chiefs are an AFC team, as are the new L.A. Chargers. But the Chargers are playing way down in Carson and, as I was telling Hank, they had been in San Diego since 1970. The Chargers, though they started in L.A., have no recent L.A. connection.

The Rams, however, were L.A.’s first NFL team. Founded in 1936 in Cleveland, they moved to L.A. 10 years later, and were here long before the Dodgers or Lakers. I suppose Hank, Leo and I should show them our allegiance.

I plan on working on Hank’s spiral with our fun-size pigskin while we wait for the Rams to make the playoffs. It should be a while.