Tips from local lifeguards will help you protect your kids at the beach, the lake or the pool.

Swim season is seemingly endless for Angelenos this year. Non-existent winter temperatures plus an abundance of recreational water choices means there is unlimited fun to be had! Four L.A. lifeguards offer advice to help you keep your family safe while you frolic in the surf or by the pool. 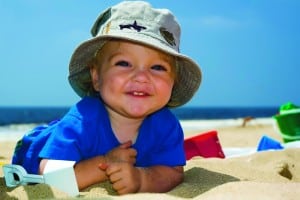 The most important thing you can do is to keep an eye on your children when they are around any form of water, says lifeguard Dawn Kelley, who works at beaches in San Pedro and Pacific Palisades.

Kelley recalls the rescue of a 7-year-old boy who was walking in the water and stepped into a sudden drop-off, causing the water to be over his head. She later found out that his parents had been on a boat and left him alone on the beach with an 8-year-old boy. “Luckily, I had seen him. Otherwise, no one would have even known he was gone,” says Kelley, who is the mother of a 7-year-old daughter.

Overconfidence in kids’ swimming abilities can also cause trouble. “Kids certainly overestimate how well they can swim and surge into the water because they often have no fear,” Kelley says.

“Parents are usually really good about looking after their toddlers but often think that their older children are better swimmers than they really are,” says Jon Daniels, a lifeguard at the Raleigh Runnels Memorial Pool at Pepperdine University, and at the lake at Malibu Cafe. “I see them getting distracted by talking to other people or swimming laps, and not paying attention to their children in the water, and that’s the biggest risk.”

Parents also need to stay tuned in to make sure kids follow pool rules – including not running around near the pool, where they risk falling and injuring themselves. Keep an eye on your child even if they are not in the water. “Kids can disappear in the blink of an eye,” says Kelley. “Our biggest problem outside the water is missing children.” 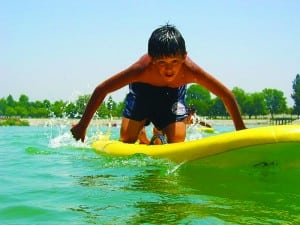 Make sure your child learns to swim.

Your child should start learning to swim by about age 3, or whenever they have the cognitive ability to understand what you are saying and the physical ability to swim, says Richard Godino, Los Angeles City Lifeguards Association President.

“There are different parent/child classes out there,” says Godino. “Before trying lessons, you may want to get your child used to the water by walking around with them in a warm pool.”

Godino stresses the importance of learning to swim yourself to prevent inadvertently transferring a fear of the water to your children.

Kelley also stresses the importance of swim lessons “as soon as they’re comfortable putting their face in the water. Swimming is an important skill,” she says. 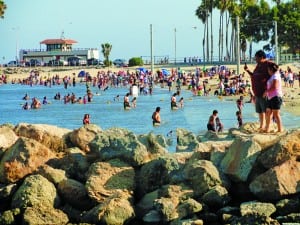 Be aware of rip currents at the beach.

The most dangerous risk you face when swimming in the ocean is getting caught in a rip current. “Rips are really just water coming in and out at an angle. If you feel like you are stuck in one, don’t swim back to the shore. It would be like swimming up river,” says Godino. “They usually last 100 yards, so swim parallel and just hang on until the rip current dissipates.”

If you try to fight the rip current, it is the fatigue that will pull you under, not the rip itself, says Kelley. “A lot of our job is keeping people out of rips,” says Kelley. “We can see the rip from the tower, but you cannot see it when you are swimming in the ocean.”

The lifeguard watching the beach is your best source of information about where it is safe to swim. “Wherever you go, swim near a lifeguard,” says Godino. “If you are near open water (beach or lake), go up and talk to them about obstacles in the water that day.” 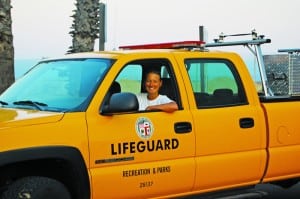 Swim only in permitted areas in lakes.

L.A. County has numerous lakes where families swim, boat and enjoy many other aquatic activities during the summer months. And lifeguards stress the importance of only doing these things where they are permitted.

“People tend to think of lakes like pools, but the lack of visibility is a big problem,” says Godino. “The water can go from knee-deep to over your head in one step.”

Jim Hughes, aquatics manager and lifeguard at Bonelli Park, home to 250-acre Puddingstone Reservoir, says it’s important to limit swimming to the swim beach where the shore and water are monitored.

“Always swim around lifeguards, but remember, lifeguards aren’t an insurance policy. Parents need to be responsible for watching their children,” says Hughes. “Lakes are different than the ocean. There are no intimidating waves to keep kids at the shore.

The quality of water in the boating and fishing sections of the lake should also keep swimmers out.

“We have a chlorination system that feeds the swim beach. If you swim in other parts of the lake, you risk swimming in waste and other matter from animals,” says Hughes.

Home owners are required by California law to have a four-foot gate around their pools, with a latch that locks when it is not being used, says Godino.

“Parents should learn basic rescue techniques and first aid and have a phone nearby at all times when children are swimming at home, just in case there is an emergency and they need to call 911 right away,” Godino says.

When hosting a party, it is important for there to be at least one designated watcher who is not drinking, says Godino.

“No matter where you are,” he says, “the more eyes on the kids, the better.”