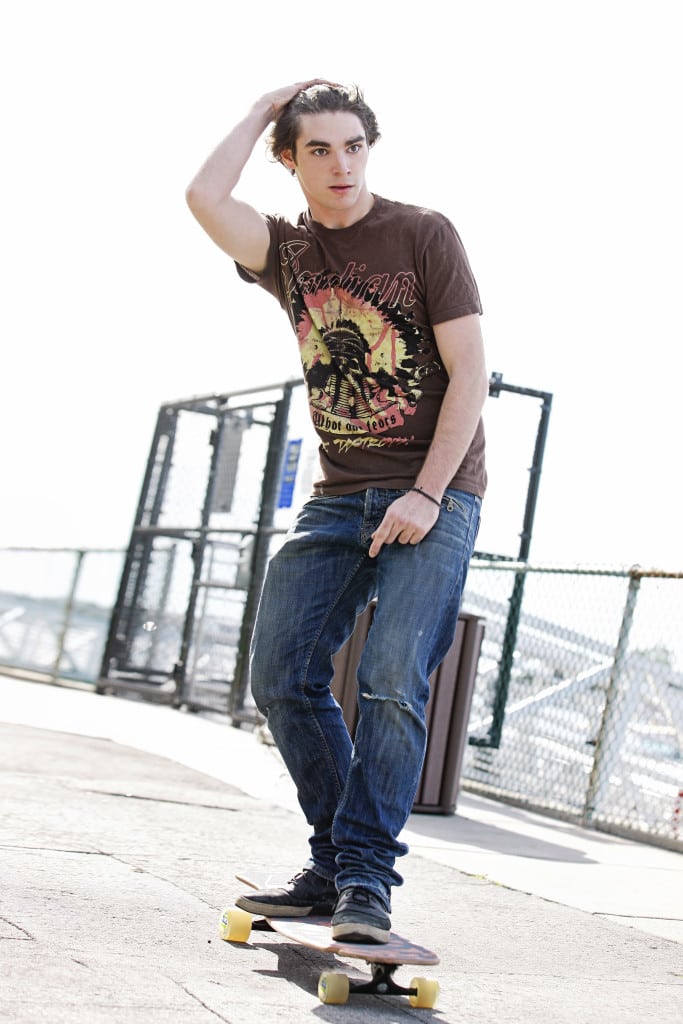 He wore crutches in his role as Walt “Flynn” Jr. on “Breaking Bad,” but in real life RJ Mitte played soccer and basketball, and loves to skateboard. PHOTO BY RENA DURHAM

As a child, actor RJ Mitte had a clever trick for keeping his legs – which were in casts – cool during the hot summer months growing up in Austin, Texas and Lafayette, Louisiana. He froze pennies and quarters and then dropped them into his casts.

“The problem was, I couldn’t get them out. So when I walked, you would hear the ching, ching,” says Mitte with a laugh.

Diagnosed with cerebral palsy at age 3, Mitte endured 10 years of casting, leg braces and painful physical therapy. But as he whizzes into Burton Chace Park in Marina Del Rey on his skateboard for our recent interview, it’s hard to believe he was told as a child that he wouldn’t be able to play any type of sport.

The 22-year-old, best known for his role as Walt “Flynn” Jr. on the Emmy & Golden Globe Award-winning AMC series “Breaking Bad,” is charming, funny and easy to chat with. He has overcome tremendous obstacles, but he is not boastful. He’s grateful for his family, for the doctors who took care of him for so many years, for being an actor and most of all for having the opportunity to help others.

“I’m always working on my disability, to not allow it to control me,” says Mitte.

Unlike his character on “Breaking Bad,” who walked with crutches, Mitte has mild cerebral palsy. He hasn’t worn a leg brace since he was 13.

Cerebral palsy is a neurological disorder that typically appears in infancy or early childhood. It permanently affects body movement and muscle coordination. Chronic spasticity and extreme muscle stiffness are common trademarks of this disorder, which can lead to deformity and limit range of motion.

Mitte’s parents sensed something was wrong early in his childhood. “He started walking at 9 months, but he would walk on his toes,” recalls his mom, Dyna Mitte. “He would pick things up differently, and his speech was a little slurred.”

Though multiple doctors evaluated RJ, he wasn’t diagnosed with CP until a recommendation led the family to Shriner’s Hospital when he was 3. Because RJ was not able to bend his feet, orthopedic specialists began a series of stretching exercises and serial casting to improve his muscle function. Treatment would last until he was 13.

RJ’s mom says she will never forget that first trip to Shriners Hospital. Finding out that her son had a neurological disorder was a shock, and watching him go through the painful treatment was excruciating for the young mom. Her mind was filled with questions, doubts and fears. “I kept it together at the hospital and the drive home,” she says. “But, that night I called my aunt and just started crying and crying. I didn’t know what else to do.”

As her sounding board and confidant, Dyna’s aunt listened, allowed her to cry as long as she needed to and then told Dyna something she never forgot: “Go ahead and do all your crying tonight, but then you need to be strong for RJ. Start doing your research and give him a normal life. You have to move forward.” 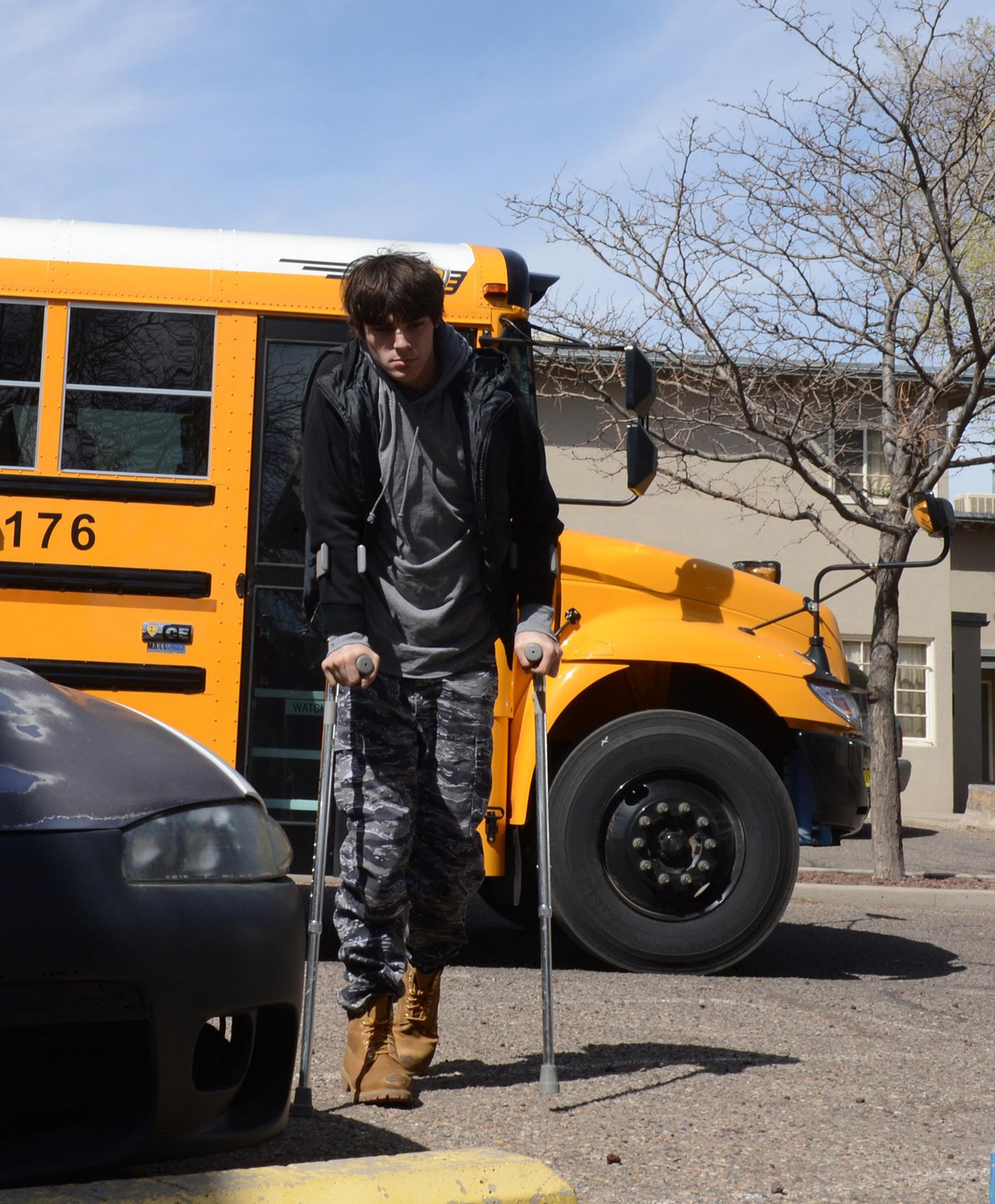 RJ Mitte spent six seasons on the set of “Breaking Bad,” which he saw as an opportunity to change his life.

And that’s exactly what the whole family did. They learned as much as they could about cerebral palsy, sought out the best occupational, physical and speech therapy available and stayed hopeful and resourceful.

“RJ was just a little guy and we watched him go through the pain of having his feet stretched, casted in that position, stretched some more and casted again,” says Dyna. “It’s hard watching your child in so much pain.”

Through it all, Dyna tried to remember that in addition to all the therapy, RJ also needed a childhood.

She disguised many of his occupational therapy exercises as games, filling jars with grains and pennies for RJ to play with to increase his sensory and motor skills, encouraging him to help her fold towels to develop better hand-eye coordination, and letting him touch an icy popsicle and then warm clothes right out of the dryer to learn to sense the difference between hot and cold.

“We tried to have fun as much as we could,” says Dyna. “When his friends went swimming and he couldn’t because of his casts, we would bring out the water guns for him.”

RJ’s family also worked hard to instill in him a can-do attitude. In their house, there was no “I can’t” or “I won’t.”

“I never wanted him to feel he couldn’t do something,” says Dyna. “If he came home and said ‘I can’t play football,’ I would say let’s go in the backyard and see what we can do. Maybe we can figure out a different way to play.”

RJ grew to love sports. He played six seasons of soccer through a local park league while wearing leg braces. He tried basketball. He currently loves to skateboard and snowboard.

“My grandfather always said, ‘You’re not allowed to take a backseat, you’re not allowed to not do things,” says RJ. “Whatever I wanted to try, my family always supported me and encouraged me. I played sports, even though there were people who said I never would.”

Learning to dribble a soccer ball down the field and shoot baskets in a leg brace taught RJ that being different is not a permanent roadblock. It’s just a challenge. And as his family always says, “Everyone has challenges in life. It’s what you chose to do with it.”

The Challenge of Acting 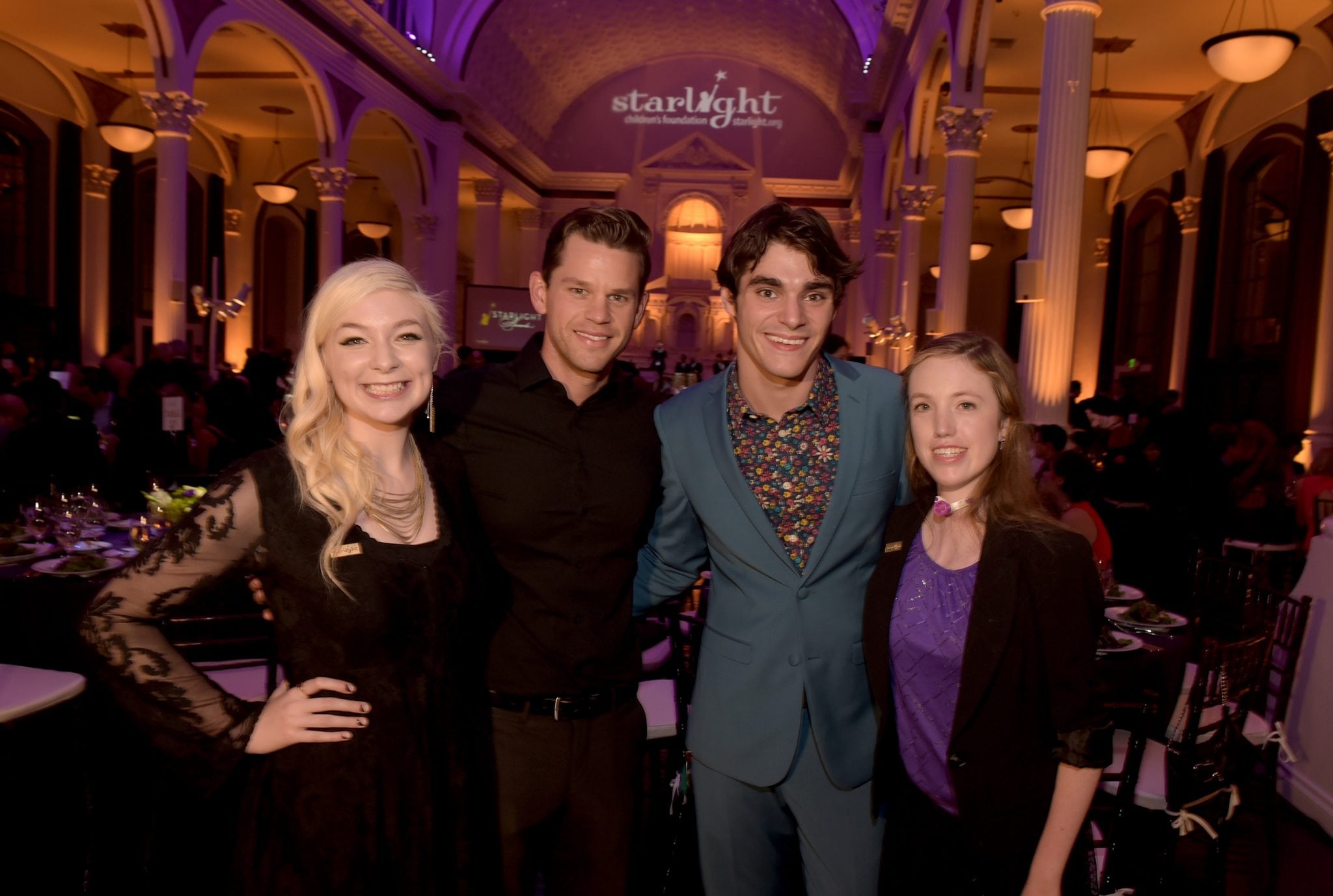 When his family moved to Los Angeles to seek more opportunities for his younger sister, who was pursuing commercial and acting work, RJ decided to try something else most people didn’t think possible for him – acting.

When he was first approached by his sister’s manager about acting, even his mom was hesitant. “My first reaction was ‘no,’” says Dyna. “He had gone through a lot and I didn’t want him to go through the rejection and the negativity that’s inherent in this business.”

But, RJ, in typical fashion, was determined. He was going to give it try and see what happened.

Within a few months of starting acting lessons, he became a regular on Disney’s popular “Hannah Montana.” And a year after arriving in L.A. he was cast in “Breaking Bad,” where he played Walt Jr. throughout the show’s six-season run.

“I saw this as an opportunity to change my life for the better, and I took it,” he says. “It turned into a career.”

There are not many actors with disabilities on television or in movies. RJ sees his roles as an opportunity to show people what life with disability really is like, break some stereotypes and inspire kids to pursue their dreams.

“Booking ‘Breaking Bad’ was a good reminder for us of what we have accomplished,” says Dyna. “A disability does not mean confinement. You have to allow your kids to enjoy life and help them pursue their passions.”

In addition to acting and being the face of the worldwide GAP advertising campaign, RJ travels the country as the youth spokesperson for the National Disability Institute and as an ambassador for Shriners Hospital. He was recently honored by the Starlight Children’s Foundation, a global charity that partners with experts to improve the lives and health of kids and families around the world. RJ received the inaugural Starbright World Inspiration award for “inspiration to teens with chronic illness and their siblings.”

Going through painful therapy was not easy, but RJ says it has trained him for adulthood. Still enduring shoulder, back and leg spasms, he says he has learned to “adapt to it.”

And, like many other children who are different from their peers, he had to face unkind words, stares and bullies. His hand was broken by a fellow 8-year-old in elementary school, who teased and ridiculed RJ and one day stomped on his hand.

The physical and emotional hurts haven’t made RJ bitter. In fact, they had the opposite effect. His experience growing up with cerebral palsy has given him exceptional resilience and an unrelenting determination to help others faced with adversity.

His advice to parents raising a child with differences: “Let your kids always try anything they want. Don’t put limits on them. Teach them to stay strong. They have the ability to achieve. Push them to take their life back.”