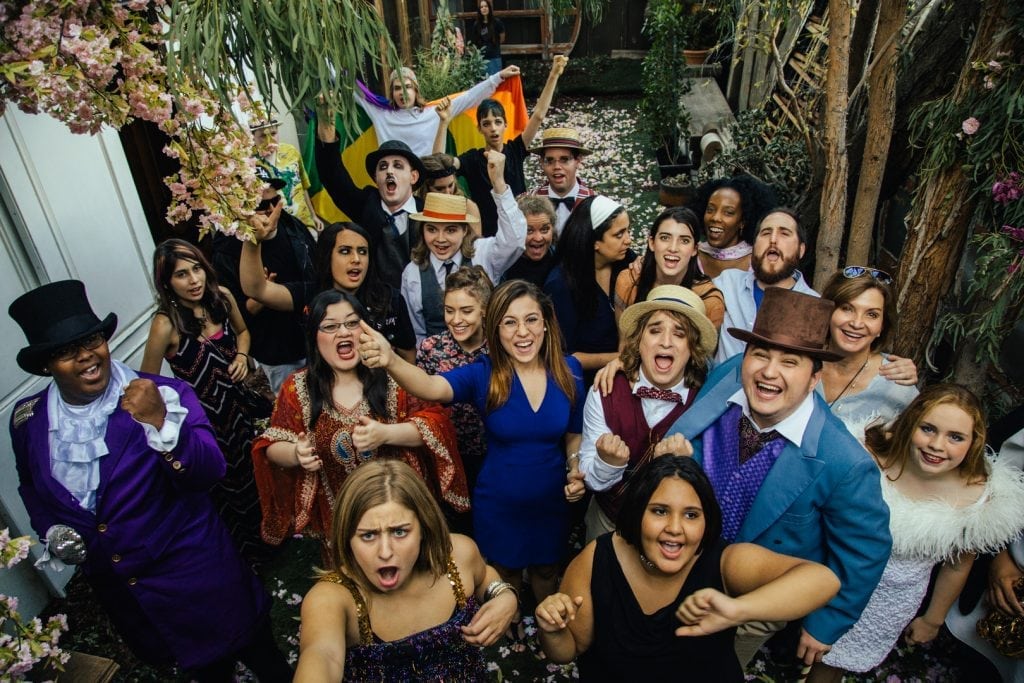 Student artists from Spectrum Laboratory make up the cast of “Use Your Imagination,” a virtual reality film that debuted at Oculus House at the Sundance Film Festival. PHOTO BY JEFF LORCH

Lots of local folks took their films to last month’s Sundance Film Festival, but one has a particularly fun story behind – and above, below and all around – it. “Use Your Imagination,” which premiered at Oculus House at the festival Jan. 22, is a virtual reality musical created in collaboration with, and starring, artists with autism.

The film was made with a grant from Oculus VR, makers of virtual-reality equipment. The Oculus VR for Good program paired 10 filmmakers with 10 nonprofits to champion the nonprofits’ social missions and tell their stories.

From among 600 submissions, Spectrum Laboratory, an L.A.-based organization dedicated to empowering artists on the autism spectrum to create original films and music, was selected as one of those nonprofits.

“It’s kind of like a virtual musical journey through autism,” Jason Weissbrod, who co-founded Spectrum Laboratory two years ago, says of the film they created. “It looks like you are standing right next to our student artists. It’s almost 3D.”

The first step in the process was for Weissbrod and Spectrum Laboratory co-founder Garth Herberg to attend VR for Good Boot Camp in the Silicon Valley, where they received hands-on instruction in VR filmmaking and met filmmaker Roberto Drilea and mentor Opeyemi Olukemi, who leads digital and interactive programs for the Tribeca Film Institute. 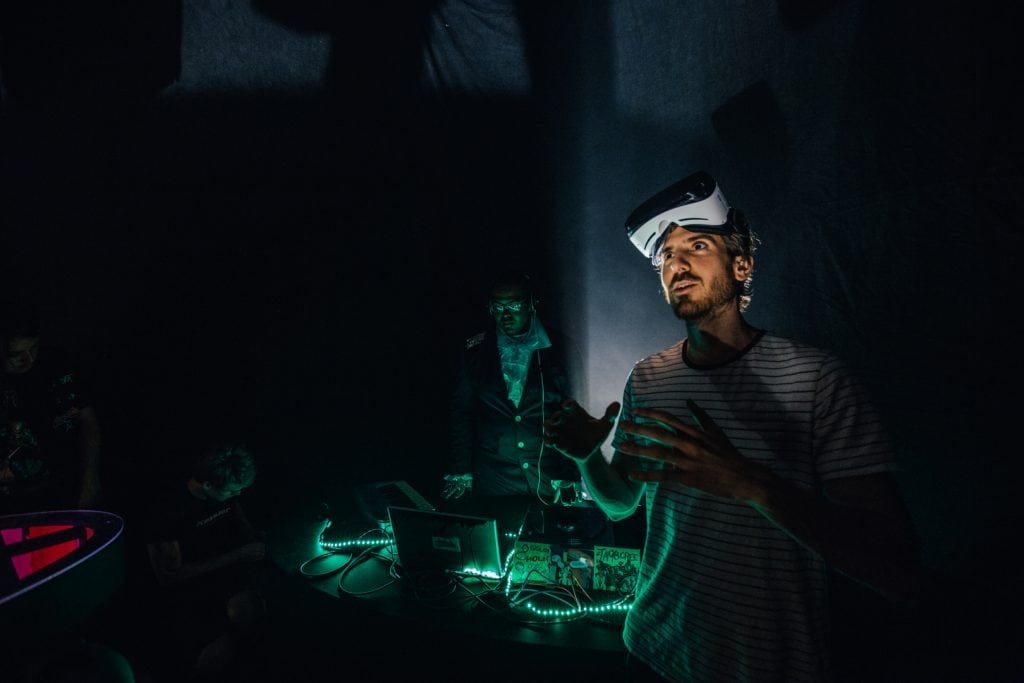 Garth Hereberg, head of music at Spectrum Laboratory, works on “Use Your Imagination.” PHOTO BY JEFF LORCH

The Spectrum Laboratory team brought their new knowledge back to L.A. and worked with their students in what Herberg calls “a true collaboration” to write the music and script and stage the film. The next step was for Drilea to come to town for the filming, which is a bit different than making a traditional film.

“It’s more like doing a stage or play production,” explains Weissbrod, because the action is filmed in all directions at once to create the VR effect. “[The students] had to perform it almost perfectly in one take.” The film was shot over five long days, giving the Spectrum Laboratory artists a “full-on filmmaking experience,” he says.

And just as Weissbrod and Hereberg returned from Park City, glowing from the audience’s great response to the “Use Your Imagination” premiere at a private Oculus House event, they began gearing up for a new session of classes at Spectrum Laboratory.

Weissbrod, the organization’s head of film, and Herberg, head of music, met when both were working at The Miracle Project, the well-known local musical theater program for people on the autism spectrum. The two eventually paired up to focus on their passion for bringing film to the autism community. They now offer a range of classes in film, music and animation. They also offer one-on-one mentoring, and Weissbrod is currently mentoring one student in writing. 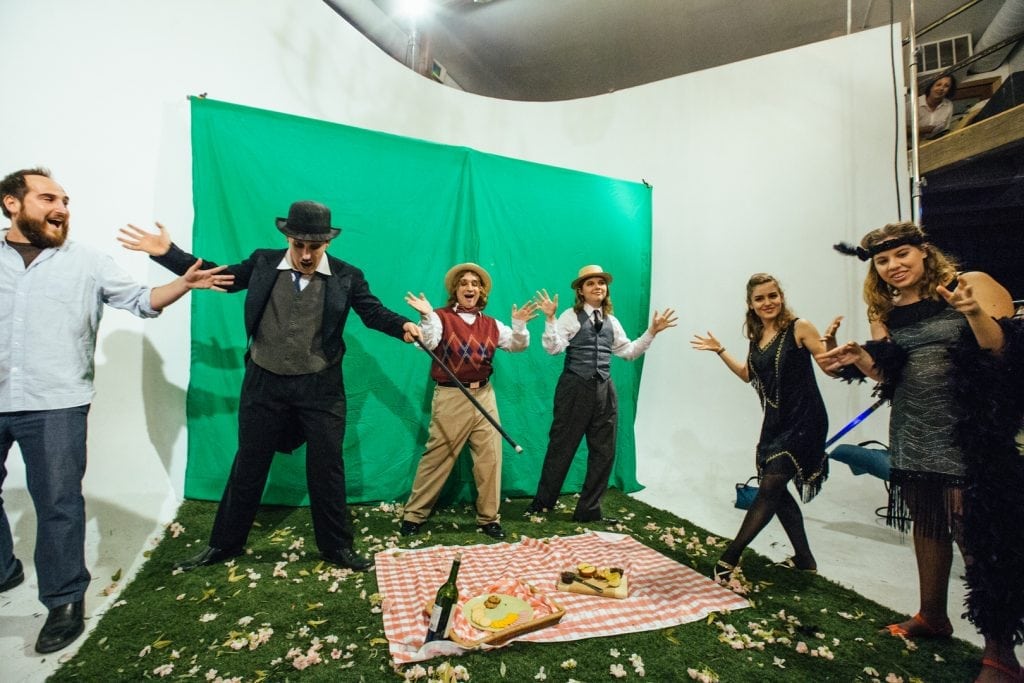 Their students produce albums, music videos and short films that are posted on the Spectrum Laboratory website. “It’s kind of like an art school, and at the same time, it’s a production house,” explains Hereberg. “I think our mission is really to tap into our student artists and figure out their strengths and their passions.”

The two say that anyone on the autism spectrum who has a passion for filmmaking or creating music in any form might be a fit for the program. Weissbrod recommends that families check out the organization’s website and view the videos students have created and the class schedule, then reach out through the site’s contact page to discuss their artist’s interests.

While Spectrum Laboratory does pair artists with entertainment professionals and support students in their career goals, the organization isn’t just for students interested in going pro. “It’s a huge social benefit, too,” says Hereberg. “This is really a haven and a safe and a fun place to be.”

The program’s youngest current student artist is 12, and its oldest is 26, and Hereberg and Weissbrod say they’re open to working in any direction a student wants to go. “That’s why we call it a laboratory,” Weissbrod says. “It’s about experimenting.”