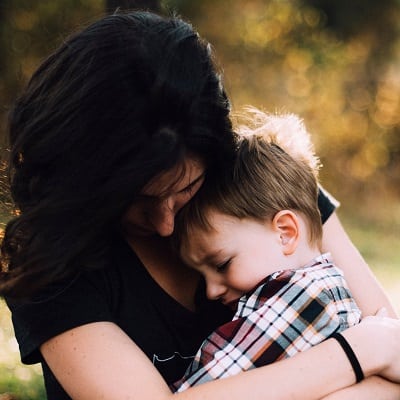 September can be a prickly time of year. The kids have started school, and everyone’s getting used to the fall schedule and responsibilities. Anxiety, which is often part of this picture, can show up in many different ways, according to Lori Baudino Psy.D, a clinical psychologist with a private practice in Westchester.

“Anxiety is a protective mechanism,” says Baudino. And your child might not react to it the same way that you do. Some anxious kids have tantrums, while others withdraw. Some appear shy or procrastinate.

If your child is having an anxious moment, Baudino suggests some strategies that could help get you both through it. Start with simple, nonjudgmental descriptive statements, such as, “I see that you are clenching your fists and crying,” or, “I hear that your voice is getting very loud.”

“You’re not trying to stop it,” says Baudino. “You’re giving control back to the child by saying I see you.” You might also describe your own feelings about what is happening, being careful not to belittle your child.

The next step is to implement movement.

“Getting your child to physically change their stance is really effective,” Baudino says. Invite them to sit, stand or walk with you. Ask whether you can sit with them or put an arm around them. Ask whether you can hold their backpack, or whether they would like to hold a transitional object.

If your first suggestion doesn’t work, pull back and try something else. “It’s not one size fits all,” says Baudino. “You have to read your child.”

The mom of two recalls a recent car ride to school with her daughter, who was unusually argumentative that morning. When they arrived at school and parked the car, Baudino said, “I wonder whether you’re going to run or leap.”

“She looked at me like, ‘I’m not doing this,’ so I said, ‘Well, I’m going to run,’” says Baudino, who then got out of the car and ran up the path toward school. Her daughter quickly followed. “We had this connection of laughing, then we slowed down and walked into class.” That little moment changed the whole dynamic of their morning. It got one more school day underway with a smile.