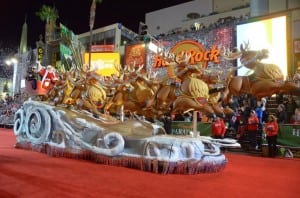 One sign the yuletide season is approaching Southern California is the annual Hollywood Christmas Parade. Celebrating its 83rd year, this longtime local holiday favorite has been described as the largest Christmas celebration in the country. It will include marching bands from across the country, equestrian acts, colorful floats and a number of celebrities, including Santa Claus. This year’s parade also salutes the 50th anniversary of the Civil Rights Act, and the legendary Stevie Wonder will serve as Grand Marshal. Proceeds from the parade, which will be hosted by Dean Cain, Laura McKenzie, Erik Estrada and Montel Williams, will benefit the Marines’ Toys For Tots campaign.

The parade steps off at 5 p.m., Nov. 30 and will proceed up Hollywood Boulevard from Highland Avenue to Vine Avenue, then down Vine and west along Sunset as far as Orange. You can view the parade curbside for free, or purchase grandstand seats for $25-$85. Learn more at www.thehollywoodchristmasparade.org.