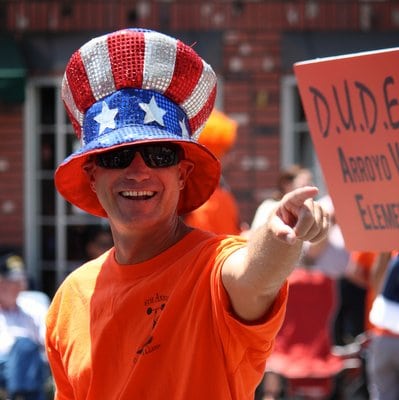 Dads Uniting Dads in Education might look like goofy fun, but it’s a serious way for fathers to get involved in schools. PHOTO COURTESY D.U.D.E.S.

Scan the crowd of volunteers manning a school event, and chances are you’ll see mostly moms, with a few uncomfortable looking dads. But not in South Pasadena. Thanks to a grassroots organization called D.U.D.E.S. – Dads Uniting Dads in Education & Service – fathers in South Pasadena show up in full force when a cry goes out for parental help.

D.U.D.E.S. is the brainchild of Jeff Kirschenbaum, a dad at Marengo Elementary School. “He was looking for a way that the fathers at our school could get more involved,” explains Ed Donnelly, president of D.U.D.E.S. “The six of us who founded the group bought in immediately.”

D.U.D.E.S. has grown to a volunteer pool of more than 130 by putting a male spin on tasks. They use community builders such as “Sochi (think Olympic games) in South Pasadena” to create a bond that helps grow their base. “We had video games set up so we could have a little winter sport competition,” says Donnelly. “I may have known a dozen of the guys beforehand, but now I know 50 or 60 of them, and when there’s a call at school to do something like clean up the kindergarten playground, we have a network of people we can reach out to.”

D.U.D.E.S. also sponsors fundraisers that appeal to the fellows, including a poker tournament and a goofy all-day sporting event called “The Camden Classic” on a green parkway area on Camden Avenue. The nonprofit even steps up to run events like Marengo Elementary’s “Field Day.” “We had a giant inflatable obstacle course instead of just some orange cones set out in the back field,” says Donnelly. “We brought in a dunk tank that the principal, teachers, and some of the dads sat in. The kids loved that. We said, ‘The D.U.D.E.S. are going to fund whatever we need to provide for today, but we’re also going to staff it.’ And about 50 guys took the day off work and ran the thing.”

Not all D.U.D.E.S. events are sports-oriented; the group also sponsored a performance by ukulele virtuoso Jake Shimabukuro for Marengo’s fifth grade students.

The organization has chapters in all South Pasadena elementary schools and will expand to middle schools in the fall. Goals include establishing a free after-school course in web coding for grades 3-5, and providing new percussion instruments for the city’s elementary schools. But their biggest goal, says Donnelly, “is to create an organization that’s sustainable. We want to make sure that as new waves of students and their parents come through, they understand what D.U.D.E.S. is and keep it going for decades.”