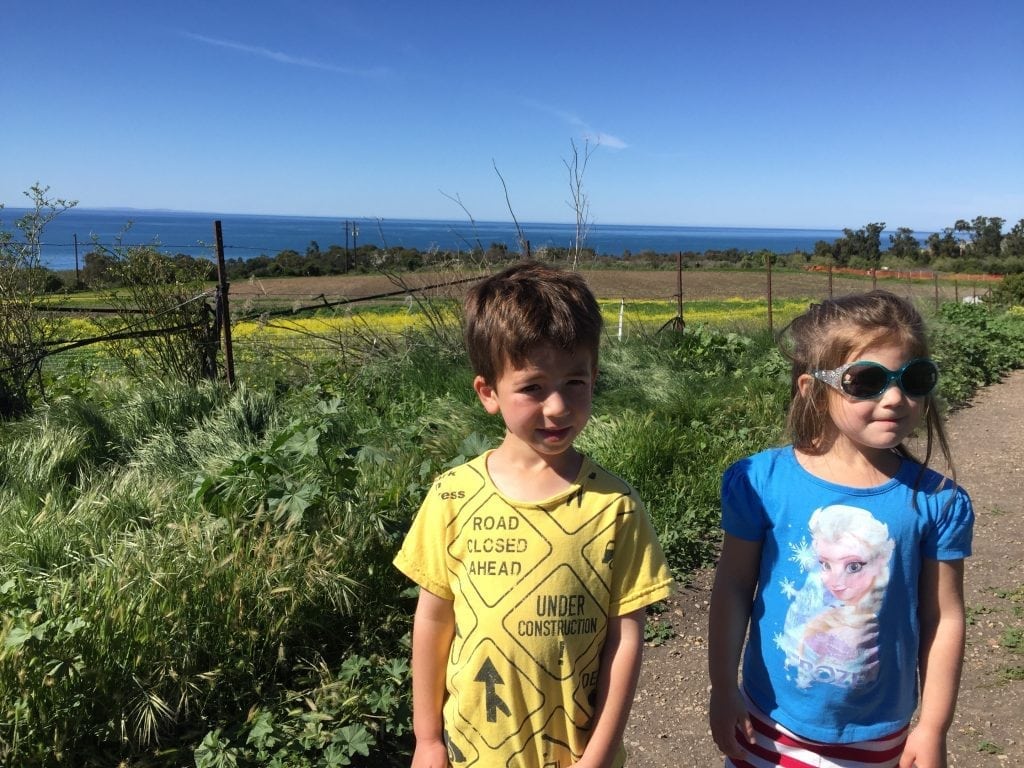 I’ve always been a traveler, and before my kids were born my trips were often to exotic destinations such as Argentina and Peru. I valued the challenges of those kind of trips: Figuring out the transit system, running the exchange rate in my head and picking up key expressions in the native language. To do any of those things successfully felt like its own reward.

But having two small children has made me more cautious. I’m not quite ready to be on a plane with them for 16 hours or be at the doctor exploring what kind of malaria pills they can take. So how could I embrace family travel and still satisfy my urge to explore, to be challenged and rewarded in a new place? This is the goal in what my family calls the “progressive vacation.”

Progressive dinners – where guests have appetizers at one home or restaurant, the main course at another and dessert at a third – have an anticipatory feel that is inherently fun to me. The same structure applies for a progressive vacation. After choosing one general area such as Santa Barbara or San Diego, I break our vacation time into three chunks and reserve three places to stay in that area (so we’re not spending too much time in the car). To reward myself for packing up and moving each time, I start us in the most basic place and we increase in luxury as we go.

On one such excursion we head off to Santa Barbara. We start with three nights of glamping at El Capitan Canyon. I choose a yurt because the kids really want to camp in a tent, but Mama really doesn’t want to sleep on the ground. In a family, the challenge of balance is ever-present. My kids, ages 4 and 6, love climbing and running and dirt, while I’m looking for some great food, a high thread count and maybe a moment or two of sitting down. There’s not a lot of overlap there, so the beginning of the trip will be more for them, but the end is mine.

To the kids, campgrounds are pretty close to paradise. They can run free without constantly hearing me scream, “Car!” There is a ton of downtime available for playing on the playground, swimming in the pool or building a fort under a low-lying branch. Most importantly, there are s’mores, s’mores and more s’mores.

And even though this stop is for the little ones, there’s something in it for me, too. The pyromaniac in me relishes building a raging campfire and the tall evergreens surrounding us give me the delicious feeling of escaping city life. I can lay in bed at night, exhausted from making my picky eaters three meals with just a grill-topped fire pit, and listen to the special kind of quiet of the woods, quiet filled with the small sounds of breezes and insects.

Turtles From All Angles 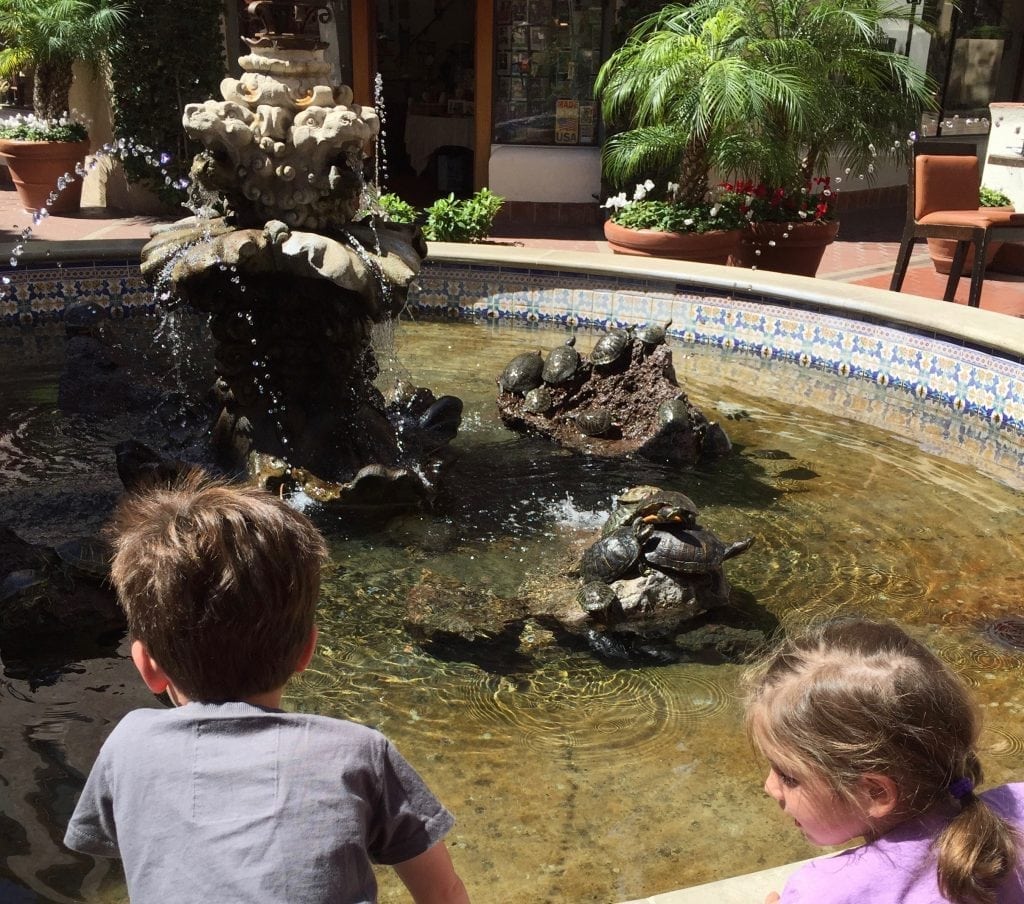 After three nights, we pack up and move on to something completely different. In this case, we head to The Canary, a Kimpton hotel in the center of downtown Santa Barbara. While we have lunch by the rooftop pool, I ask my kids what their favorite part of camping had been. “Going to the bathroom in the dark!” replies my daughter without hesitation. At first, this seems like Exhibit A for our lack of common interests, as I couldn’t appreciate our hotel bathroom more after three days without indoor plumbing. But some part of me wonders whether what she liked about nocturnal bathroom visits was the challenge. Maybe we have more in common than I realize.

We head out to wander State Street and find a little courtyard called La Arcada Plaza just a block away. It is encircled by restaurants and filled with lifelike statues. In the center is a fountain that is home to more than a dozen turtles. The vibe of camping stills lingers in me and I let the kids set the pace, so we spend about 40 minutes observing the turtles from all angles.

Though our room is centrally located, the night is surprisingly quiet, and the recent camping makes me relish the climate control. In the morning, we take the trolley shuttle down State Street to the beach. We have lunch on the pier, dig in the sand and then stroll over to the carousel in the park.

After the ride, I turn to talk to the carousel operator about when the shuttle downtown stops running for the day, and my daughter decides to hug the pole of her horsey underneath the stirrups. When I turn around, she and her bathing suit are covered in axle grease. We do what cleanup we can in the public restroom, but she still looks like a chimney sweep. I silently curse my pursuit of challenges. Under different circumstances I might have lost it, but I already have a plastic bag in her suitcase full of clothes from the campground that are dirtier than I thought clothes could get, so the greasy suit joins them. Camping has desensitized me, so a little dirt doesn’t seem so bad.

The next morning, it’s time to move again. On moving days, there is usually a three- to four-hour gap between checkout times at one site and check-in times at the next. This made the kids antsy at our last stop, so I try to make it seamless this time by planning an outing on the way. Our last, most luxurious stay will be The Four Seasons Resort The Biltmore Santa Barbara, so we head to the nearby Santa Barbara Zoo on the way. I’m jazzed to see the elephants and giraffes, but it was silly of me to think I could predict what would spark the kids’ interest. On this particular day, what captures them is a hill inside of a small play area at the center of the zoo. It is covered in artificial turf, and kids are taking turns sliding down the hill on large pieces of cardboard. This is a rare opportunity for my California babies to go “sledding,” and they are enchanted.

Less than 10 minutes after we leave the zoo, we arrive at the hotel. Going in, my expectations are high simply because it’s a Four Seasons, but this particular location has partnered with the Coral Casino Beach and Cabana Club across the street, and all hotel guests have access. One of my favorite things to do is dine as close to the waves as possible, and the restaurant there, Tydes, hangs directly above the surf. The bar there is an actual fish tank, so there are even fish cruising around right under your coaster. 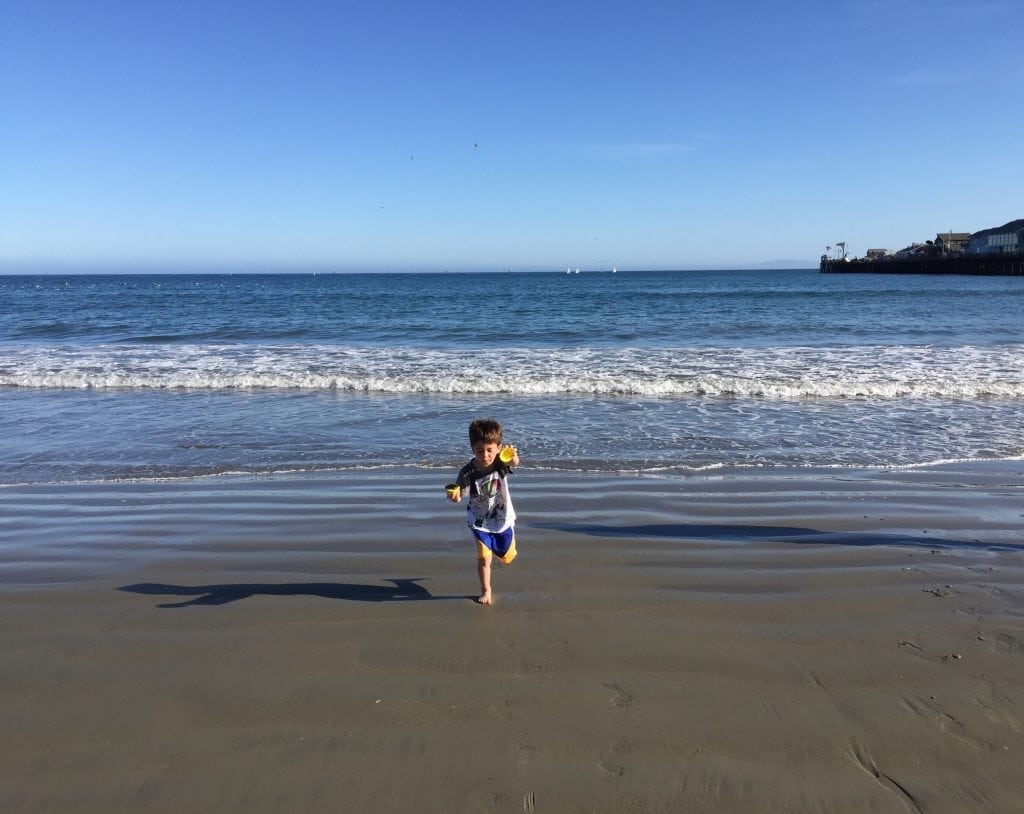 I probably wouldn’t have experienced Tydes if it was just me with the kids. I tend to stick to more casual places when it’s the three of us. Fortunately, it is finally the weekend and my husband can leave work and join us for the last leg of our trip. His presence is a different kind of luxury – the luxury of adult conversation.

Unfortunately, my body also seems to sense the luxury of having support. I’d been feeling fine going it alone for the last five days, but within hours of my husband’s arrival, I am laid low with a 24-hour stomach bug. This pattern is familiar. My health remains strong through demanding times, but the minute the last exam of a semester is over or the final deadline of a job is met – as soon as being physically vulnerable won’t have real consequences – I get sick, sick, sick.

Part of me feels bitterly sorry for myself, since I’m missing out on some of the perks of this dazzling locale (that gorgeous brunch!). Another voice in my head, however, says, Thank goodness we are not feeling this way at the campground alone with the kids. And so I alternate between the big, beautiful bed and the big, beautiful bathroom while Dad and the kids play soccer on a sprawling lawn outside.

This bump in the road shows me another way that the progressive vacation is working to my advantage: It takes the sting out of the costs of the luxury portion of the trip. If I average the expense of the Four Seasons with the budget-friendly glamping, the daily costs are more manageable. So even though I have a tendency to feel vaguely guilty at a place this nice, right now I feel like I really deserve it. And I’ve never needed thread count more.

The next day, I’m feeling better and we get some good pool time in. My husband and I watch the people come and go at the club and invent their life stories. I feel suddenly like a woman of mystery, which is a rare feeling since having children. My super power is chameleon-like adaptability, and I can slide seamlessly into any environment. I smile conspiratorially to myself as the evening cools at The Biltmore and I slip on a black sweater, still rich with the scent of woodsmoke. Sure, it was a little awkward when I had to steer The Four Seasons bellhop away from unloading the camping cooler and bag of extra toilet paper out of the trunk of my car, but it’s all part of the fun.

As my children snooze in the car on the way home, there is no question we’ve had an adventure. The packing was a little trickier, the kids got a little dirtier and there were more moving parts with three stops. But there were also a lot of treats along the way that were often linked to circumstances that allowed me to appreciate things more deeply. My exploratory spirit is satisfied. Like with the turtles in the fountain, we looked at our destination from all angles.

Kate Korsh is an L.A.-based writer and intrepid traveling mom of two.