The most famous hotel in Old Quebec is the imposing Fairmont Le Château Frontenac, “the castle,” which sits high atop cliffs overlooking the St. Lawrence River. PHOTO BY LUC-ANTOINE COUTURIER

It is Paris without the jarring jet lag, a European experience wrapped in the warmth of Canadian hospitality. And in little more than five hours, you and your family can be there.

A vacation in Montreal and Quebec City, in the Canadian province of Quebec, is the stuff family-travel dreams are made of. There’s just enough of the exotic – French as the common language, centuries-old stone buildings lining narrow cobblestone streets, sidewalk cafés serving poutine, tourtière and other curious dishes – to immerse visitors in an intoxicatingly different culture.

Yet this is Canada, which means English and kindness and familiar food are found here, too.

It also means that 2017 is a great year to visit. Canada is celebrating its 150th birthday and Montreal the 375th anniversary of its founding, and both historical events are being marked with festivals, special exhibitions and a whole lot of dancing in the streets (even more than usual, which is saying something). Entrance to Canada’s national parks and sites is also free all year.

Over the years my two sons, husband and I have explored the lively streets of Montreal and Quebec City together and uncovered a wealth of family-friendly activities. Here are some of our favorites.

The first thing my sons noticed the first time we stepped off a plane in Montreal was the signs.  “Mom,” said the 12-year-old, with wonder in his voice, “they’re all in French!”

When a gate agent then greeted us with a smile and heavily accented bonjour the deal was sealed.  We were obviously, wonderfully in a new place. 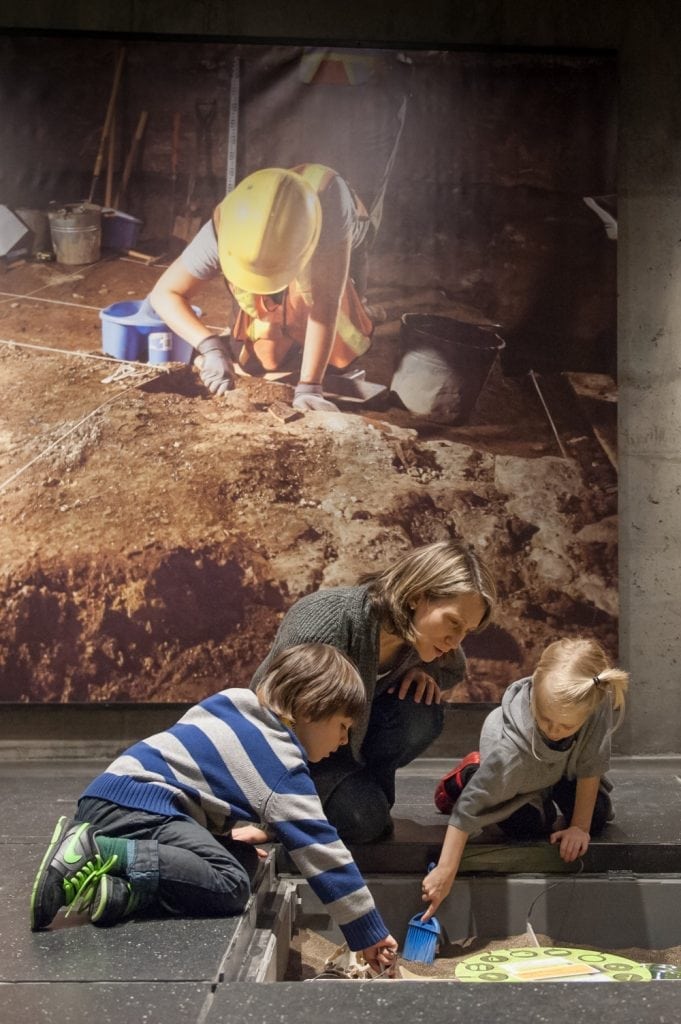 The Archeo-Adventure at Pointe-à-Callière lets families experience a simulated archeological dig while learning the history of Montreal. PHOTO BY MARC-ANTOINE ZOUÉKI/POINTE-À-CALLIÈRE

Our first family trip to Quebec followed a simple itinerary: three days in Montreal, a morning train ride (a very European thing to do!) east to Quebec City, three days in and around that city, then a connecting flight home from Quebec City. On subsequent visits, we explored further afield – to majestic national parks, gastronomically rich rural regions and beyond. But whenever we return, we always include a stop in one of these vibrant cities.

One of the joys of many European cities is the ease with which visitors can walk to restaurants, shops and attractions. Montreal and Quebec City are wonderfully walkable, and Montreal augments that ease with an efficient subway system.

To make the most of pedestrian-friendly Montreal, follow my family’s lead and choose accommodations in or near Old Montreal (we’ve twice stayed at the InterContinental Montreal).

After dropping off your luggage, hit the streets for a do-it-yourself walking tour of Old Montreal. Enjoy the French signs and shops in the old stone buildings. Stroll through the Old Port that stretches along the St. Lawrence River. Visit the touristy public square Place Jacques-Cartier and the more imposing Place d’Armes, home of the Notre-Dame Basilica.

Step inside the basilica, a true North American masterpiece of Gothic Revival architecture. Rather than visit during the day, our family opted to attend an evening theatrical performance that transformed the inside of the basilica into a stunning, dramatic space. My sons, not easily impressed with old churches, deemed the performance “really cool.”

Drama also animates the streets each evening when Cité Mémoire, said to be the largest outdoor video-projection in the world, beams historical vignettes onto buildings throughout Old Montreal. Download the free app on your mobile phone to access suggested walking routes and audio files of the stories that accompany the tableaus. Favorite projections include the Beaver Rebellion in Place Jacques-Cartier (featuring beaver puppets, how very Canadian) and a dazzling collection of faces that appear on the trees along Jacques-Cartier Quay.

While the projections are eye-catching, there’s nothing like a ghost to grab your children’s attention. On our evening ghost tour with Fantômes Montréal Ghosts, a 317-year-old spirit (played to perfection by actress Esther Maloney) connected beautifully with our group, asking younger participants (12 years being the recommended minimum age) to carry her lantern and help demonstrate how the stocks that once graced Place Jacques-Cartier were used to punish criminals.

Thanks to a tip from our friendly ghost, we visited Pointe-à-Callière, the Montreal Museum of Archaeology and History located on the exact spot where Montreal was founded in 1642. Begin your visit in the museum’s theater, where a 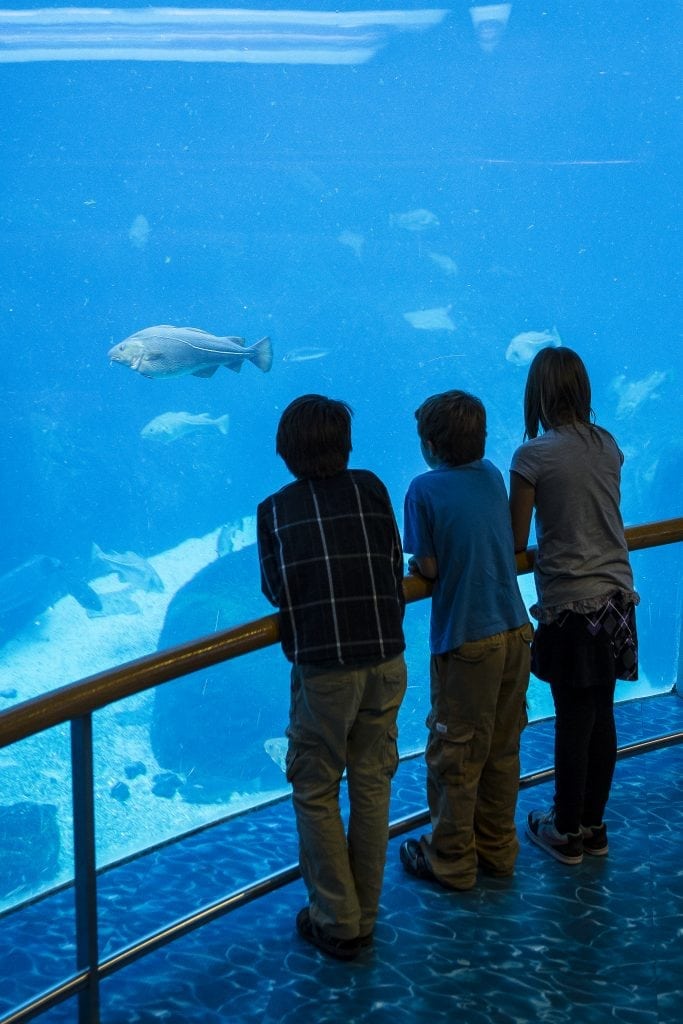 multimedia presentation on Montreal’s history is projected on actual archaeological remains. Then it’s down to the basement, where a vaulted stone conduit leads under the streets. There, amongst a rabbit’s warren of stonework, are the remains of the first Catholic cemetery and other artifacts displayed and interpreted to great effect.

For more recent history (and to see some adorable puffins, penguins and porcupines) take a short subway ride to Olympic Park, site of the 1976 Olympic Summer Games. The big score here is Biodôme Montreal, where five ecosystems of the Americas are recreated in the former Velodrome cycling stadium. Highlights include the frenetic penguin display in the sub-Antarctic area, floor-to-ceiling windows in the Gulf of St. Lawrence marine environment, a tropical rainforest cave where bats fly, and the children’s slide that parallels the slide otters use inside the Laurentian maple forest habitat.

Although older children will enjoy Biodôme, there’s a Montreal attraction that seems tailor-made for them: jet boating in the Lachine Rapids. This popular activity includes a hyperspeed tour of the Old Port on route to the rapids and, once in the whitewater, 30 heart-pumping minutes of twisting, turning and getting absolutely, positively soaked.

All this activity is sure to make your family hungry. While serious foodies will want to research the latest-greatest spots in this food-crazy town, families will enjoy noshing at three Montreal institutions. St-Viateur Bagel Shop (or Fairmount Bagel shop, locals fight over which bagel is best) is a great fueling stop on your way to popular Mount Royal Park. Schwartz’s Montreal Hebrew Delicatessen on Saint-Laurent Boulevard is the place for traditional smoked meat sandwiches. And finally, consider dining where harried local families have dined on roasted chicken and poutine since 1951, at a St-Hubert restaurant (multiple locations).

When you do opt for a fancier restaurant – and really, you should – watch for an Apportez votre vin sign in the window, indicating you should bring your own wine.  How very continental.

How fitting that Quebec City, the cradle of French civilization in North America and the only walled city north of Mexico, would name its century-old train station Gare du Palais, the Palace Station. Because visiting this 409-year-old city is a royal treat.

For a full dose of old-world charm, stay within the fortified ramparts that surround the historic district of Old Quebec. The most famous hotel here is the imposing Fairmont Le Château Frontenac, “the castle” that sits high atop cliffs overlooking the St. Lawrence River. For a more intimate experience, reserve a room at the recently renovated Hotel Manoir Victoria, our family’s go-to hotel.

Once you’re settled in, get out and start walking. Head through the cobblestone streets and beside the plastered stone buildings of Upper Town (where the above-mentioned hotels are located), along the trail that runs atop the fortified ramparts surrounding the town, on the cliffside terrace that sits beneath the Château Frontenac, and to the Citadelle of Quebec where the daily Changing of the Guard ceremony is reminiscent of the pageantry at Buckingham Palace. 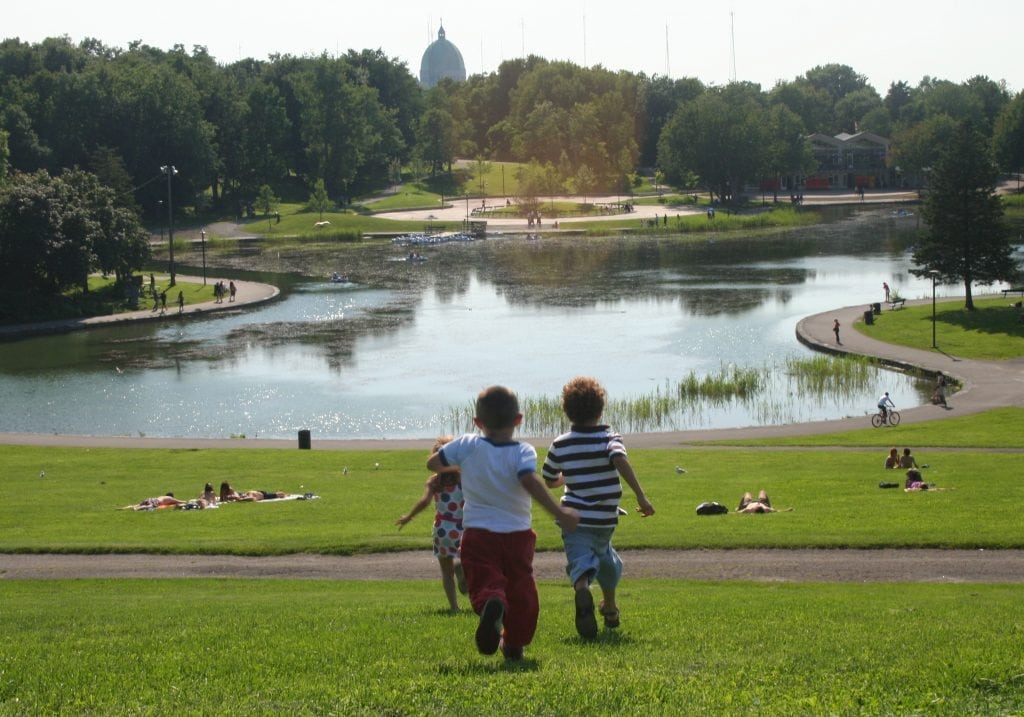 From Upper Town, walk or ride the funicular down to the higgledy-piggledy streets of Lower Town. Here you’ll find Place Royale, the site of the first permanent French settlement in North America, and the Petit Champlain quarter with its boutiques and art galleries. Nearby, the highly interactive Musées de la Civilisation has permanent galleries focused on historic and contemporary Quebec as well as temporary exhibits including this summer’s “Like Cats and Dogs,” which explores our understanding of animal behavior through fun games and simulations. On weekends, the whimsical “Once Upon a Time” costume workshop engages ages 3 to 10 in some major make-believing.

If a break from city life is desirable, day trip east to Montmorency Falls or Canyon Ste.-Anne. Both parks feature impressive waterfalls, ziplines and hiking, but only Canyon Ste.-Anne offers a two-minute “Air Canyon” ride that sends adrenaline junkies screaming across the deep gorge on a cable suspended 295 feet in the air.

Calmer pursuits await at the nearby Basilica of Sainte-Anne-de-Beaupré, said to be North America’s oldest pilgrimage site. The centerpiece is a neo-Roman style basilica filled with religious art including a replica of Michelangelo’s Pieta. It’s a fascinating stop, no matter what your belief system.

If you’ve not yet tried Quebec’s official comfort food, stop by busy Snack-Bar Saint-Jean for poutine. Because eating a plate of crispy fries topped with squeaky cheese curds and gravy really can be a cultural experience. 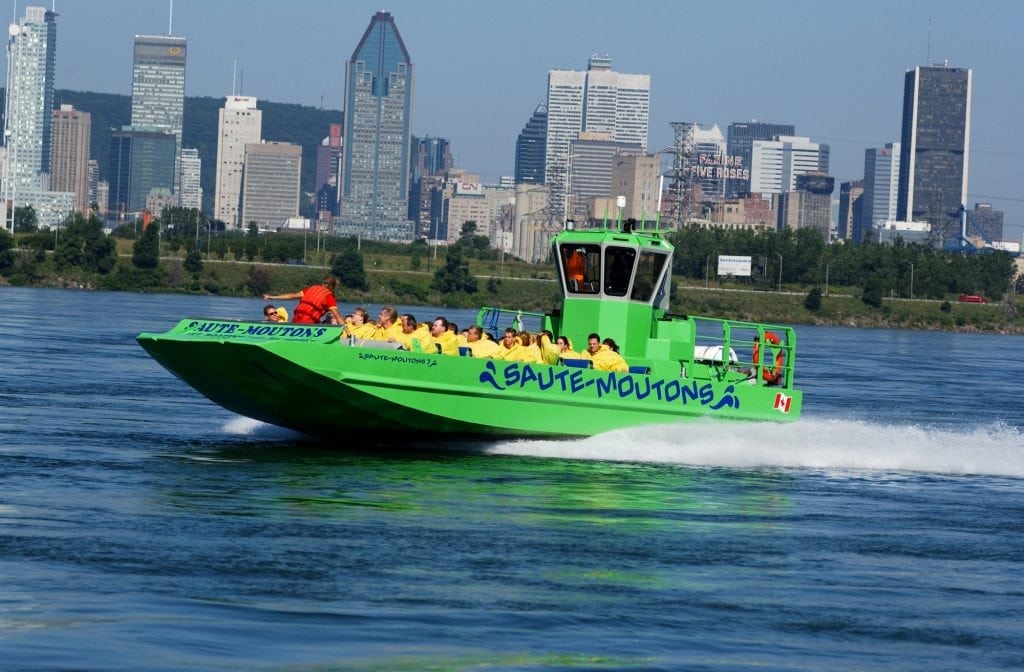 Jet boating on route to the Lacine Rapids includes a hyper-speed tour of the Old Port. PHOTO COURTESY A.P.E.S.

When Martha and the Vandellas sang, “Summer’s here and the time is right for dancin’ in the streets,” Quebec City and Montreal were obviously listening. Both cities host a heap of festivals each summer, including these family hit-makers.

Festival d’été de Québec, July 6-16 in Quebec City, is one of North America’s biggest, least expensive and most awesome music festivals, with 300-plus shows on 10 stages. www.infofestival.com

Montreal Cirque Festival, July 6 to 16, is all circus, all the time with free outdoor programming and activities as well as ticketed shows. montrealcompletementcirque.com/en

Les Grands Feux Loto-Quebec, Aug. 2-23 in Quebec City, includes fireworks exploding from a platform in the middle of the river in front of the Chateau Frontenac. www.lesgrandsfeux.com

Les Fêtes de la Nouvelle-France, Aug. 9-13 in Quebec City, takes visitors back to the 17th and 18th centuries with shows, re-enactments, culinary events and a chance to play dress-up in historical garb. nouvellefrance.qc.ca/home 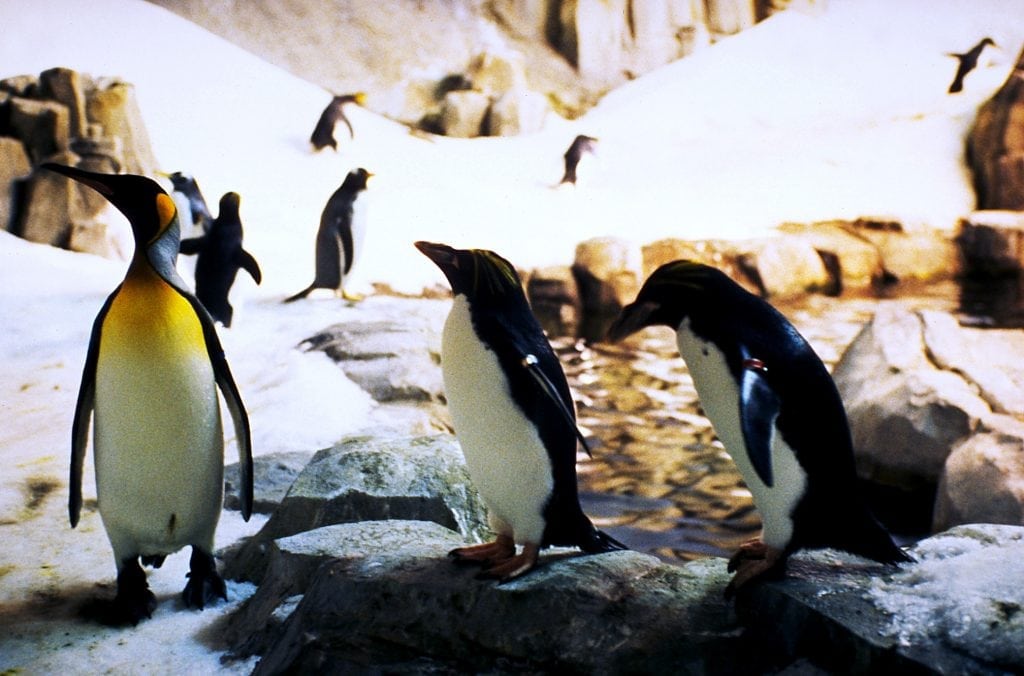 Penguins are among the many natural attractions at the Biodôme de Montréal, where five ecosystems of the Americas are recreated in the former Velodrome cycling stadium used for the 1976 Summer Olympic Games.
PHOTO BY SEAN O’NEILL/BIODÔME DE MONTRÉAL

Ann Britton Campbell is an award-winning travel writer and mother of two. Find her on Instagram and Twitter: @DearAnnTravels