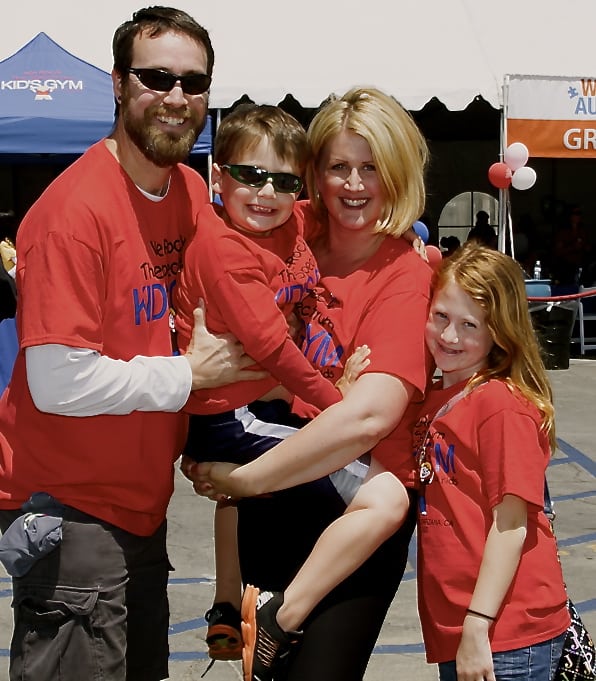 When her daughter, Sophia, was born in 2004, everything went as planned. Sophia developed normally, was an early talker (at age 1) and interacted appropriately with children and adults. Dina and her husband, Tim, were easing into parenthood.

In 2007, the Kimmels welcomed son Gabriel. Sophia was happy to be a big sister, and Dina and Tim were thrilled to have a new baby boy. But something was different this time. “I took Gabriel to a mommy-and-me class when he was 18 months old, and I knew something was wrong,” says Kimmel. “The doctors wouldn’t listen to me.” Kimmel persisted, and in 2009 Gabriel was diagnosed with autism.

Kimmel made it her mission to track down the proper specialists and services for Gabriel. Working with an occupational therapist, she learned about the equipment and activities that were calming for children on the autism spectrum, and the family installed some equipment in their home. Gabriel began to sleep better.

She opened her first We Rock the Spectrum Kid’s Gym For All Kids in 2010. “We opened it for our family. It was our home,” Kimmel says. Sophia and Gabriel were able to play together, and Gabriel began making extraordinary progress. Today, 7-year-old Gabriel’s autism is considered high functioning, and he is in general education classes at school.

To help families who couldn’t afford $150 per hour for occupational therapy, Kimmel decided to expand We Rock the Spectrum from a single gym to a franchise.

Today, at 12 gyms from Tarzana to Glendale to Boca Raton, Florida, the company tagline – “Finally a place where you never have to say I’m sorry” – comes alive. Each franchise is run by trained behaviorists, and the individual gyms provide open play time, a “Break Time” drop-off service for parents, camps and fitness classes. Costs are low ($10 for unlimited open play time, for example) to make the gyms as accessible as possible.

“This is what I was born to do,” Kimmel says. “We are not only educating parents [of children on the spectrum] who need it, we are educating typical children and typical parents who need it, so they can learn compassion and become little advocates for these kids.”