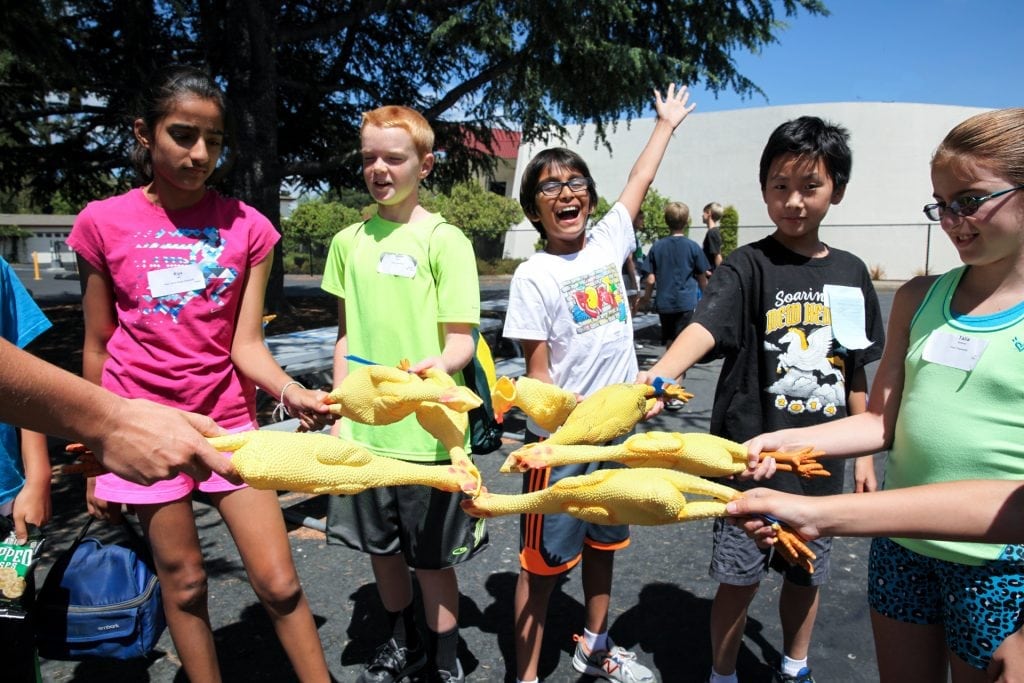 Kids at Galileo summer camps take on challenges together and are encouraged to support each other through failure. PHOTO BY MICHEL EDENS

After the kids’ holiday break from school comes the headlong rush toward summer vacation. If you’re not going on vacation, you’ll need somewhere for the kids to go while you are working, and summer camp is the traditional solution.

Camp gives kids a chance to try out new activities such as cooking or canoeing, or devote days and weeks at a time to passions such as theater, baseball or computer coding. One other camp perk you might remember from your own childhood summers is the chance to make new friends. Camp friendships can last a lifetime, and a week or two can be enough to get them started.

The change of scene sets the tone for trying something new. “Camp gives kids an opportunity to reinvent themselves in a new environment and get to know each other in a new environment,” says Sarah Lewallen, Southern California territory director for Galileo camps. “You don’t have to be who all your friends think you are at school.”

But the true key to building friendships among these reinvented campers is teamwork.

Backing Each Other Up

Galileo, which runs camp programs locally at 11 school campuses in the San Gabriel and San Fernando valleys, the Westside and South Bay, makes it official, grouping campers into actual teams. Having the same team leader, team colors, team identity and special “team time” together automatically gives kids something in common.

Even outside of team time, collaboration is one of Galileo’s major tenets. “That creates a really rich place for friendships to bond,” says Lewallen. There is an emphasis on the value of letting go of your own idea in favor of a better idea from the group and working together toward a common goal. Campers are also encouraged to take risks – such as testing an invention or stepping on stage for a performance – but also to support each other in failure. “It helps create a safe place for friendships,” Lewallen says. “The cultural norm here is to back each other up.”

At Aerial Warehouse in Culver City, campers back each other up on the mat – and in the air. The facility is dedicated to aerial arts such as trapeze along with ground-based arts including trampoline, tumbling and parkour. “We do play many games using teamwork,” says instructor Shana Lord. These include balancing techniques from sports acrobatics. “The kids will find themselves in groups with tasks that can only be achieved with everyone on board,” Lord says.

Kids work on the mat in groups of two to five, and learn to create an acrobatic shape together. They also learn to work together in the air, adding the element of trust. Lord says the trial-and-error and eventual success is motivating and inspiring for kids. “I’ve seen it time and time again in the direction of building long-lasting friendships,” she says. 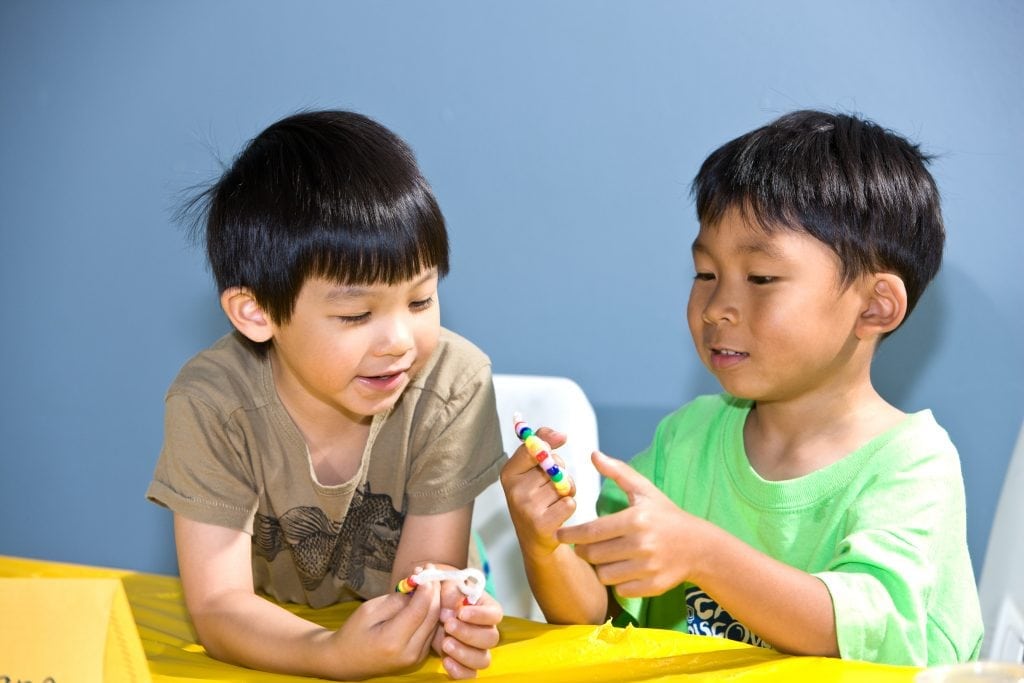 Tackling complex challenges together bonds campers – and those challenges don’t have to be physical. At Discovery Cube Los Angeles in Sylmar, hands-on activities including designing and constructing electrical circuits, assembling replicas of extinct mammals or conducting forensic science investigations are designed to facilitate teamwork and problem-solving, according to Vice President of Education Janet Yamaguchi.

“Team-focused hands-on programs bring children together as teammates working toward a common goal to accomplish some very fun and deliberate projects requiring communication and sharing of information and skills,” Yamaguchi says, “with the end result becoming friendship.” Teams also work on sophisticated technology-focused projects that let them showcase their skills and interests, giving them “an opportunity to interact socially as well as intellectually, which can foster relationships and friendships,” Yamaguchi says.

Whatever the activity, packing teams of campers into small groups is key. “We’ve found that the smaller group activities are where the strongest bonds of friendship are formed,” says Jonathan Beckmann, Assistant Head of Los Encinos School, where Camp Los Encinos features traditional camp activities plus enrichment classes. “Jewelry-making class, for instance, challenges the campers to work together to string colorful beaded necklaces and bracelets, which they often gift to each other,” he says. “LEGO Robotics requires programming skills that set one robot team against another in a type of remote-control wrestling match. The interaction and collaboration prompted by these creative endeavors unites the children in the cause of a common goal.”

Campers have a similarly collaborative experience at Culinary Kids Academy, where they experience a tasty mix of academics and hands-on cooking. “Cooking is an inherently social experience,” says Founder Danny Corsun. CKA offers school-day workshops and after-school programs throughout the year, and during summer offers weeklong camps at locations on the Westside and in mid-city L.A.

The CKA camp kitchen operates like a restaurant kitchen, with stations for grilling, salads, sauces, etc. “Every single thing we make is done as a team,” says Corson. Kids at each station need to learn to work together, communicate and care about each other to make their recipes succeed. “It provides them with tools that, even outside of our environment, make them better friends,” Corson says.

Learning – both academic and culinary – takes place as a group, and that helps kids open up about themselves. “It’s not a teacher as a talking head. We have conversations,” Corson says. “They’re very much getting to know one another.”

“The best part of the class is at the end when we’re eating and the kids can’t believe they’ve made what they’ve made,” Corson continues. And then campers talk about all the things they have learned – both about cooking and the subject they have been exploring. 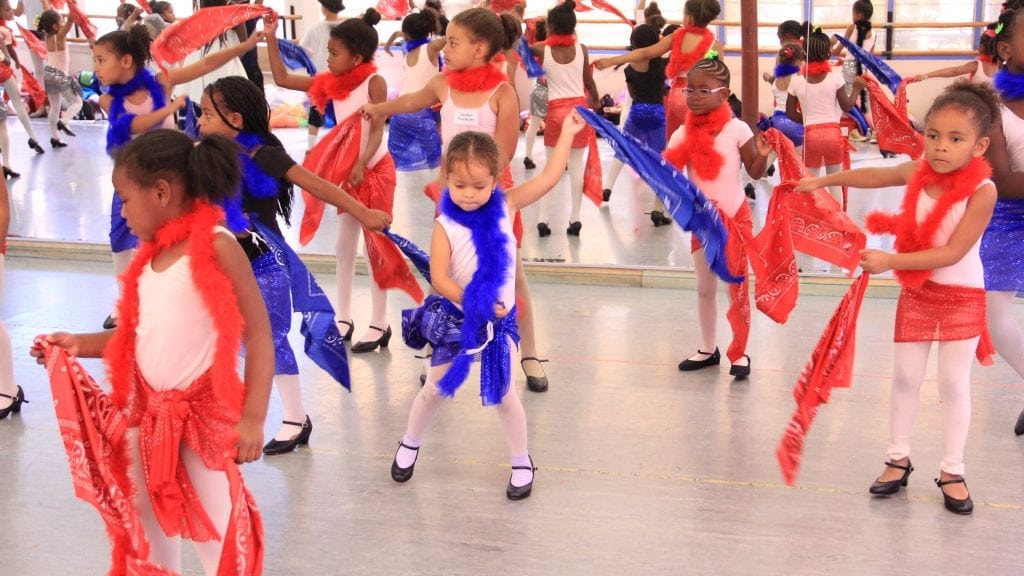 Sometimes exploration outside the camp setting is a big friendship builder. Debbie Allen Dance Academy offers Summer Intensives at its L.A. studios. The nonprofit, run by the lauded dancer, choreographer, director and actor, shapes talented young dancers from across the country. During summer, field trips outside the studio are a big friendship builder for Early Bird Summer Camp Students. “The kids are placed in groups with peers they may not have interacted with in the studio, where they get to speak freely (as talking is generally not “supposed” to happen in dance class), and they bond over the experience,” says Vivian Nixon, dean of the academy’s Early Bird program and lead teacher at its Early Bird Summer Camp.

Field trips play a slightly different role during Kids Like Me camps for children with autism. Run by The Help Group at its Sherman Oaks and Culver City campuses, Camp Sunshine and Village Glen programs use field trips as an opportunity for campers to practice what they learn during social-skills groups. “We teach them how to be a good friend, and how to make friends, in those social-skills groups,” says Kids Like Me Program Director Nicole Webb.

Younger campers go out into the community once a week, and back at camp are doing things like art and yoga. “The social skills are reiterated throughout the program,” Webb says. Teens in the Teens On the Go program have field trips daily to places such as Venice Beach, Little Tokyo and Universal Studios.

Kids Like Me also does some team building. According to Webb, as many as 80 percent of the kids in the program attend public schools and don’t get to spend much time with other kids who have autism. By grouping children of similar age and developmental level together, the camp helps foster connections among kids who struggle with social skills. Camp also gives parents and families of these children the chance to connect so that they can form a supportive community beyond camp.

And a supportive community – one that lasts into the fall and beyond – is perhaps the biggest benefit of summer camp for kids. “It has often been said that the friendships formed during summer camp are among the strongest we will ever make, and at Camp Los Encinos we don’t doubt it,” says Beckmann. “The hugs and teary eyes we see when the summer ends is all the proof we need.”