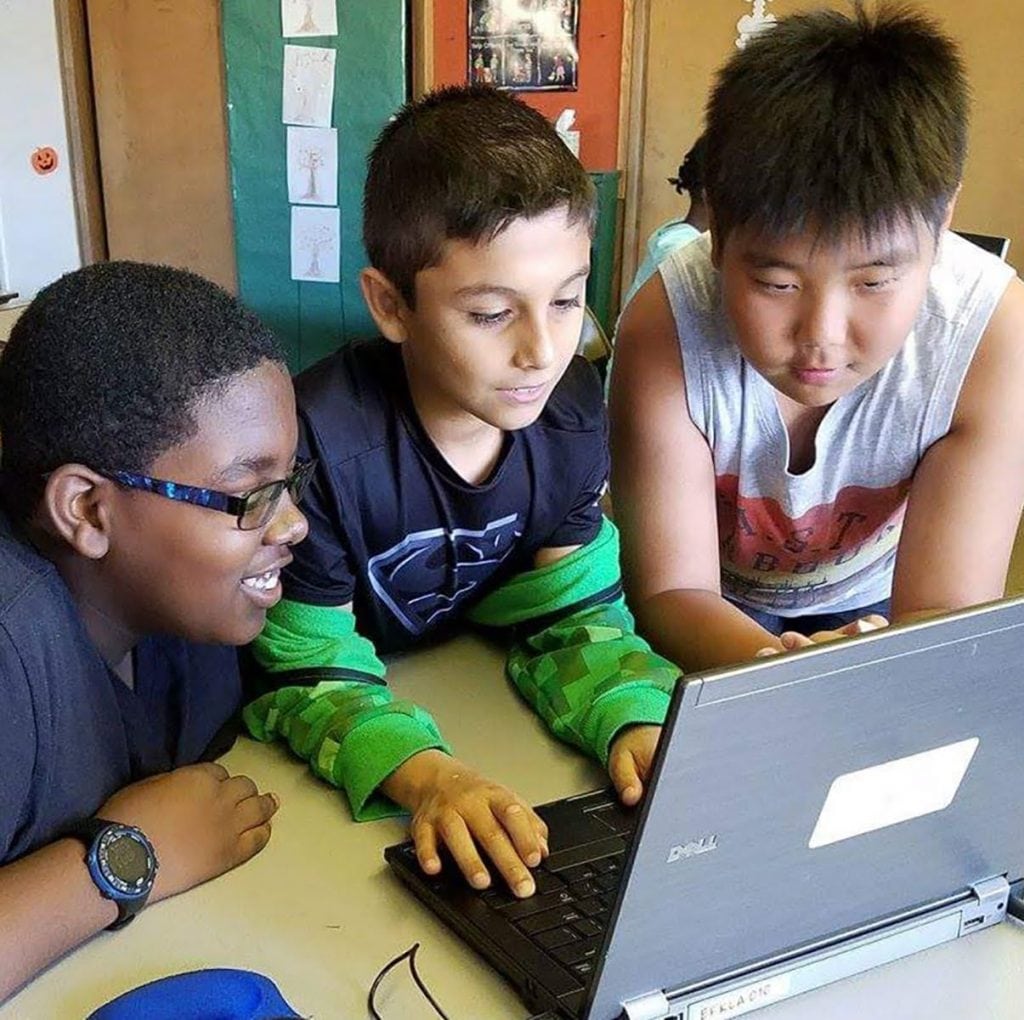 STEM programs provide interdisciplinary, inquiry-based and real-world problem-based challenges. They use an integrated approach to teach students about science, technology, engineering and math.

Here are some of the many fun hands-on learning opportunities in the L.A. area that can get your kids excited about STEM. One was even founded by a local teenager.

Ben Indeglia, who went to high school at New Roads School in Santa Monica, is beginning his study of biological sciences and molecular engineering at the University of Chicago this fall. Indeglia created the nonprofit Compton Robotics Club (comptonrobotics.com), using GoFundMe to raise $5,000 and securing a STEM equity grant to introduce robotics to underserved students at inner-city schools.

Indeglia says he loves robots because they can do challenges that humans cannot possibly accomplish. “They can go into situations where human lives would be at risk,” he says. “They can make life easier for people.”

Indeglia started learning about robotics in eighth grade by joining New Roads instructor Daniel Figueroa’s FIRST LEGO League robotics team. “I have loved Legos all my life, which is part of what makes FIRST LEGO League such a great starting point for robotics,” he says. Thinking about kids at other schools who didn’t have exposure to learning about robotics, he decided to try to change that.

He contacted the Compton Unified School District, where Superintendent Darin Brawley quickly became a champion of the idea. There are now 200 students at 24 schools participating in the Compton Robotics Club, and Indeglia has seen firsthand how kids with low self-esteem or weak math and science backgrounds have begun to believe in themselves through the trial-and-error process of programming and building. Compton Unified now also hosts a five-week robotics summer camp. Indeglia continued mentoring students and working on the program throughout last summer. 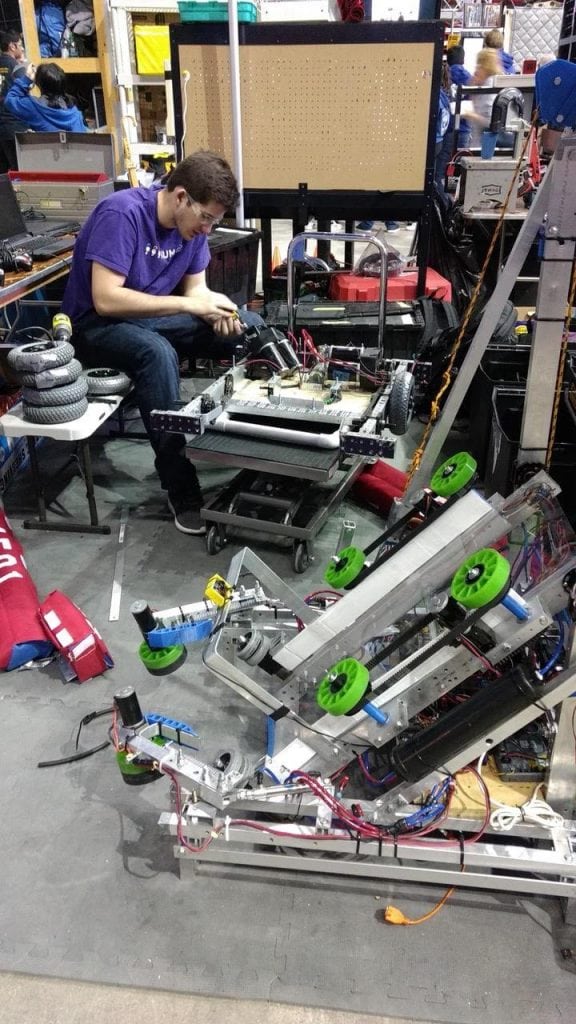 “If you truly care about an issue, make a plan to actually do something about it,” Indeglia says to fellow students. “You would be surprised how people will get behind you if you show you have a plan and a commitment.”

Of course, STEM is about more than just robotics and coding. There are elements of STEM in many fields, including architecture, medicine, engineering, flight and product design, and many unique STEM-based programs for children can be found right here in the L.A. area.

Charles R. Drew University of Medicine and Science (cdrewu.edu/community/Pipeline) offers programs for students in South L.A. who are interested in learning more about medical fields and want real-world STEM experiences in their own communities. The university’s Mobile STEM Labs are designed to inspire elementary students who have traditionally been underrepresented in medicine and other science-related professions. The program encourages minority students to stay in school and, eventually, enter the healthcare profession.

The year-round Saturday Science Academy for students in preschool through 12th grade offers fun and engaging science experiences with the idea of deepening students’ interest in science and health education. Students learn about human anatomy and physiology, math, biomedical engineering, physical science, plant life and marine biology. Parents and caregivers are incorporated into the program so that they can increase their own knowledge of STEM and healthcare-related fields and help support and encourage their children. A four-week math camp – including college readiness, SAT prep, critical thinking, parent workshops and field trips – is offered during the summer.

Data from the program shows that students who participated in Saturday Science Academy in 2017 saw a 91 percent overall improvement in their grades, with nearly 80 percent of students increasing their grades from failing to passing. Parents and students alike credit the program with improving student performance and parents’ engagement in their children’s studies.

Rasheed Ivey is one of Charles Drew University’s success stories. He began attending Saturday Science Academy at age 9. There, he was introduced to fetal-pig dissection, his first “surgery,” and he was inspired to become a doctor. He graduated from Dominguez High School and the University of La Verne, then returned to Charles Drew University as a researcher and a teacher in the academy. He’s also a fourth-year medical student in the Charles R. Drew University/UCLA Medical Education Program. 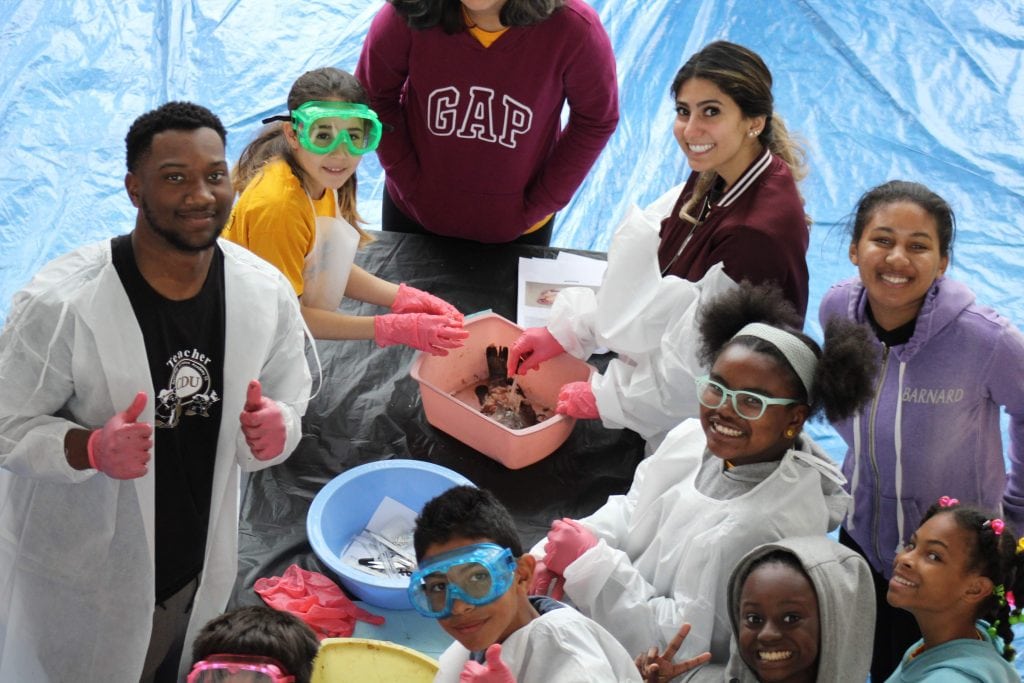 Instructors and kids engage together for some experimentation at the Saturday Science Academy. PHOTO COURTESY CHARLES R. DREW UNIVERSITY

Many STEM-based programs are focused on helping kids understand and explore real-world issues. “As a parent, I know that hands-on projects and exposure to the concepts of different engineering disciplines are key to helping children understand the world around them,” says Socorro Sperati, owner of Engineering for Kids of Los Angeles (engineeringforkids.com). “Our world today is faced with many global problems and challenges, and it will be our children who will have to find solutions to those problems. Through engineering, we foster creativity and ingenuity in our kids.”

These programs also help students understand the engineering-design process, which teaches the steps to solve various engineering problems. “Kids not only learn through planning and building; they also experience the importance of trial and error through testing and making improvements to their designs,” says Sperati.

The results of this process can be fun to watch. “It’s rewarding to be able to see the reactions of kids when it all comes together for them, once they are successful in building and programming a robot to launch a projectile towards a specific target, or when they finish constructing and wiring up their own power boat that actually works,” says Sperati. “Their thrilled expressions of accomplishment are priceless. EFK’s goal is to inspire the next generation of engineers, but it is our kids and the instant positive feedback from them that inspires me every day.”

Kids at EFK also learn that it is OK to fail. If their process is not successful the first time around, they gain confidence by learning that it may take a few more tries to make it work.

Middle and high schools used to offer woodshop, metal shop, sewing and cooking classes, but those are mostly things of the past. In response, the maker movement has been working on bringing back hands-on skills and passing them on to the next generation. Currently, 160 branches of the Los Angeles Public Library (LAPL) and Los Angeles County Library offer LA Makerspace (lamakerspace.org) workshops, so there’s likely one near you.

Most of the content for LA Makerspace workshops is geared for ages 7-14, and subject areas (robotics, coding, e-textiles and stop-motion animation) cross over into the realm of STEAM, adding art to STEM. The nonprofit trains librarians to lead the workshops, even if they have no background in coding or robotics, bringing hands-on STEAM education to communities without other access by putting it right in the local library.

The organization also has a partnership with the Los Angeles Unified School District (LAUSD) to bring makerspaces into middle schools, and it works with housing projects and churches, too.

“Parents can ask their local librarian about LA Makerspace workshops and other STEAM programs,” says LA Makerspace director Mya Stark. “If your local library isn’t doing STEAM yet, and you would like them to, you can contact us and we can work on establishing a connection at a library near you.”

Fundraising is underway to build an LAPL Family Makerspace in a 3,000-square-foot space in the Koreatown Branch of the Los Angeles Public Library. It will house 3-D printers and other tools for designing, building, testing and trying out new ideas. The organization’s mission is to spread the idea that you can create things as well as consume them, and that everyone can teach – and learn something from – each other.

Rachel Zimmerman Brachman is a writer and educator who lives in Sherman Oaks with her husband and son.