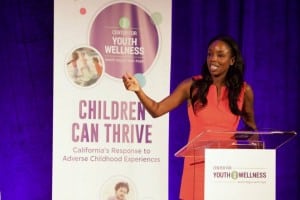 Dr. Nadine Burke Harris closes out the Children Can Thrive Summit for the Center For Youth Wellness.

Nadine Burke Harris, M.D., shows her audience of healthcare workers, therapists and community activists a photo of a bear on the screen behind her to make her point. Encountering a bear in the woods – or other serious threat – makes the human brain pump powerful stress hormones and divert blood to the large muscles of the arms and legs so we can either fight or run away.

It’s supposed to be a one-time, sometimes thing. “The problem is when the bear comes home every night,” says Burke Harris, switching to a photo of a child cowering from an abusive parent.

Physical, emotional or sexual abuse; neglect; untreated mental illness, substance abuse or domestic violence in the home; divorce or having a relative in prison are examples of childhood trauma. Burke Harris and her colleagues at the Center for Youth Wellness in San Francisco call them Adverse Childhood Experiences, or ACEs, and released a statewide report in November detailing how these ACEs lead to a host of health and emotional problems.

The report, based on four years of surveys of more than 27,000 adults conducted between 2008 and 2013 by the California Department of Public Health, found that almost 62 percent of Californians had experienced one or more traumatic events during childhood. In L.A. County, that number is more than 60 percent, with 13 percent having experienced four or more. The data were made public at the first statewide summit on the issue, held in San Francisco.

“Children are especially sensitive to toxic stress because their brains and bodies are still developing,” explains Burke Harris. ACEs cause changes to the brains cells, and to the synapses that allow those cells to signal each other. Synapses change throughout a person’s lifetime, but 90 percent of the brain’s cellular development happens before age 6. The report found that people who experienced four or more ACEs as children are:

Summit attendees brainstormed ways to tackle this public health crisis. One clear message was that children with high ACEs scores – and their parents – need to be identified early for the best chance at healing. Pediatrician Elisa Nicholas, M.D., CEO of The Children’s Clinic in Long Beach, has created a program to identify and address toxic stress in pregnant women and families of young children, and says parental resilience, support in time of need, social connections and knowledge of parenting can help protect children against ACEs. “Parents need mentors,” she says, “so that they can mentor their child.”