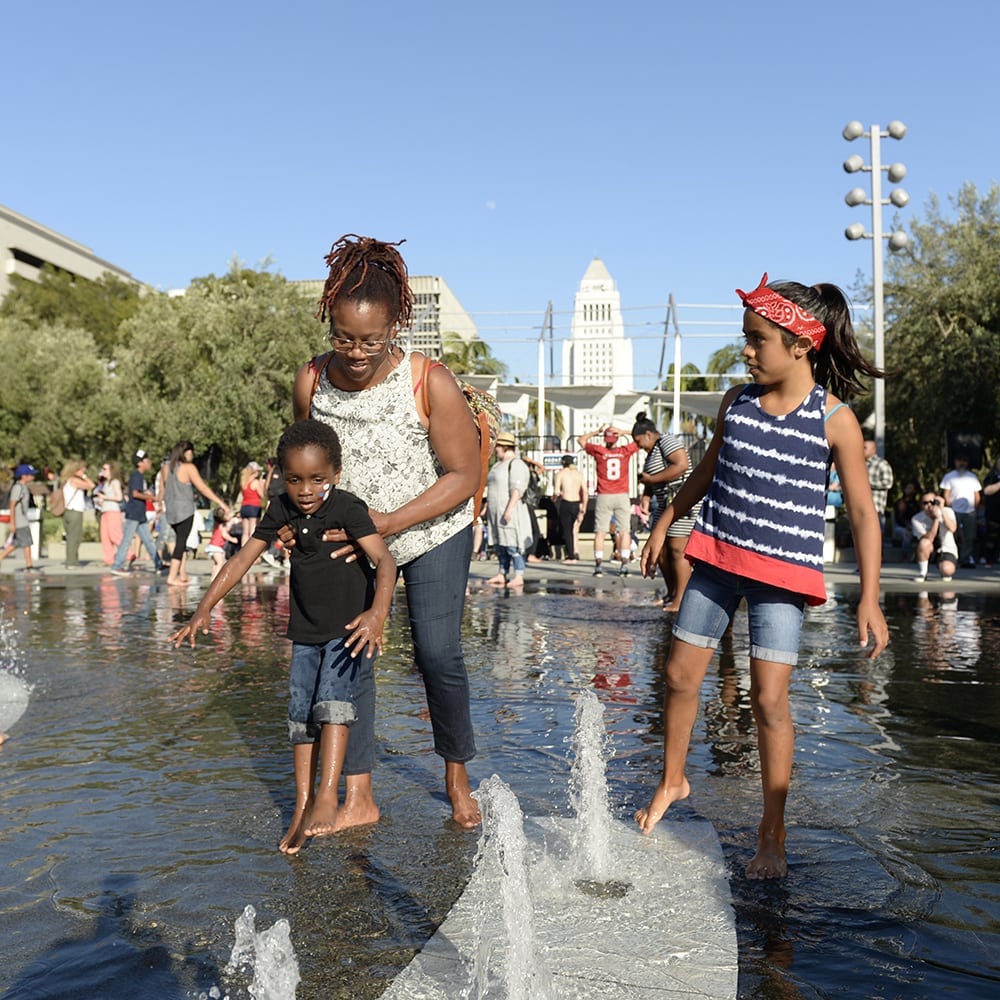 Southern California is filled with fantastic sites to visit this summer, and not all of them are expensive. As great as Disneyland, Knotts Berry Farm and LEGOLAND are, you do not need to spend $400 to have a fun family outing (though in SoCal you should always bring money for food and parking).

You’ve certainly heard of some of these family hotspots, but when was the last time you actually took the kids to visit them? Summer is the perfect time to pile into the car and visit another part of town. Many of these spaces are occasionally closed for private events, or have extended hours or early closure during summer, so call ahead or check online before you head out.

Let’s start downtown. The Last Bookstore (lastbookstorela.com) on 5th and Spring streets in the historic core of Downtown Los Angeles is one of the largest bookstores in the U.S. selling new and used books. The labyrinth on the second floor is more than 10,000 square feet and holds thousands of books, a book tunnel, boutiques and small galleries that make you feel as if you’ve stumbled into a Willy Wonka wonderland of literary culture. The children’s section of new and used titles is on the first floor, and there’s also a huge selection of vinyl records. Even if you don’t buy anything (it’ll be tough to resist), it is fun to look around. 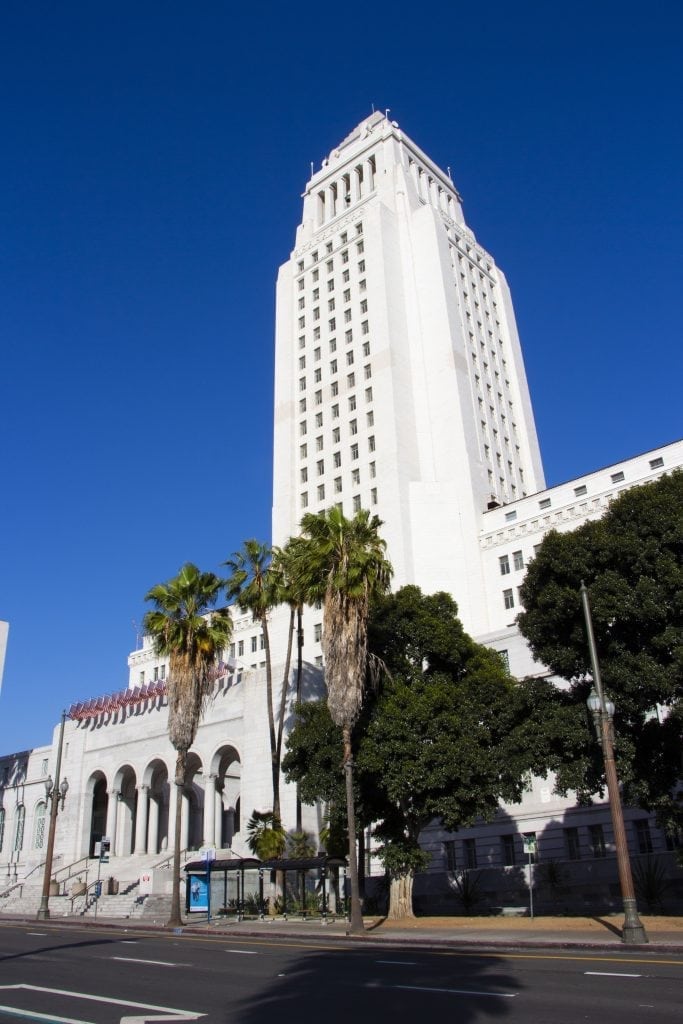 One of the best kept secrets in downtown is that you can go to the top of City Hall for free. The observation deck is on the 27th floor of this Art Deco masterpiece. There’s no cover charge, but you have to go through an LAPD checkpoint in the lobby and take two elevator rides up before you walk one floor to the top. The 360-degree panoramic view is one of the best vantage points in the city and much less expensive than the taller U.S. Bank Tower (which costs at least $19 per person). You will have to pay $10-$20 along Main, Spring, Temple or First Street for parking or you can take the Metro Red Line to Civic Center/Grand Park, just a football field west of City Hall. City Hall is not open on Saturday and Sunday.

Located between City Hall and the Music Center is Grand Park (grandparkla.org). Surrounded by government buildings on all sides, this rectangular park is four blocks long and calls itself “the park for everyone.” Almost all events there – including the annual Fourth of July and New Year’s Eve celebrations – are free, and the park’s best family feature is the splash pad on the west side just past the Starbucks. What’s less known are the Sunday events that take place at 2 p.m. weekly through early October. Featuring live DJs and food trucks, the vibe is like a multigenerational dance party, much more kid friendly than a rooftop hotel or music festival. Grand Park’s design connecting City Hall to the Music Center harkens back to the City Beautiful Movement from the 1890s, using epic civic architecture to inspire citizens to take greater pride in their city. Watch the sun set over the Music Center at Grand Park and you will get the idea.

Less than four miles from Grand Park is The California Science Center (californiasciencecenter.org) in Exposition Park. Admission to its permanent, interactive science exhibits is free. You can also see the Space Shuttle Endeavour here for free, with a timed reservation. A film at the center’s Imax Theater will cost you $6.75-$8.95, but it isn’t every day you get to see a movie on a seven-story screen. Adjacent to the Expo Line, and across the street from USC, the science center is also within walking distance of the Natural History Museum, the California African American Museum, the Memorial Coliseum and the new Banc of California Soccer Stadium for the Los Angeles Football Club. The George Lucas Museum of Narrative Art is the next big attraction coming to Exposition Park, and the rose garden at the north end of the park next to Exposition Boulevard is a hidden jewel. Parking is $12, but there’s so much to do in this location that it’s still a bargain. 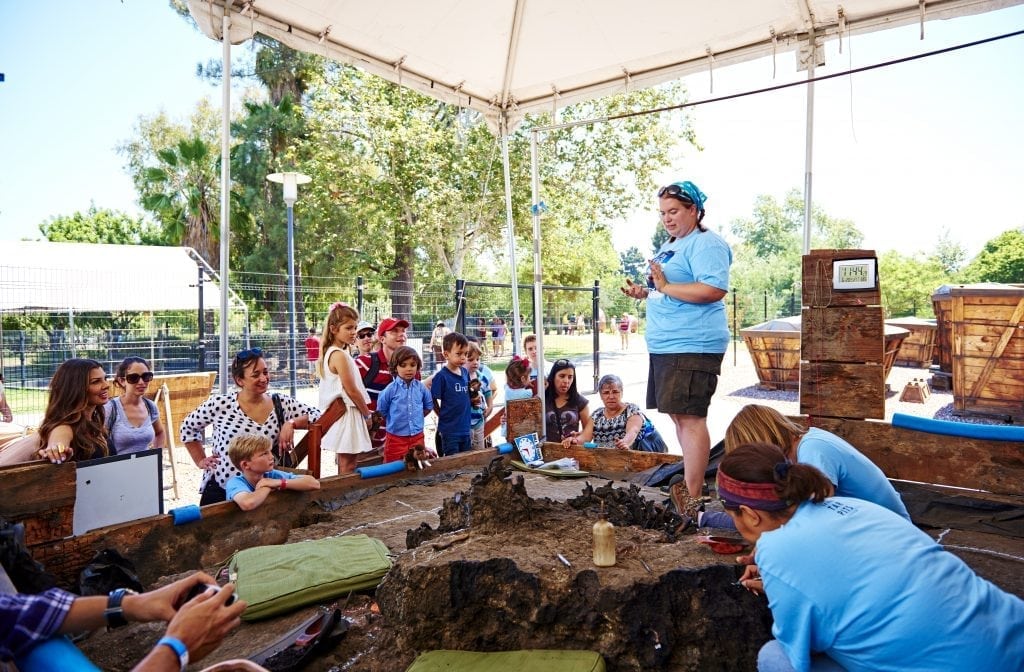 Roughly six miles west of the science center, the La Brea Tar Pits (tarpits.org) is a huge active archaeological site and a hugely underrated attraction. Located in the Miracle Mile district, on the north side of Wilshire Boulevard and just east of the Los Angeles County Museum of Art (LACMA), the Tar Pits reveal the forgotten ecology of imperial mammoths, saber-toothed tigers and grizzly bears that roamed our city before the last Ice Age. The onsite George C. Page Museum not only features these lost species, it provides information about the Chumash and Tongva Native Americans and how they used the tar found there to make roofs watertight and seal the canoes they used to sail to the Channel Islands. Tours of the excavation site are free with museum admission: $15-$25 for adults, $7-$17 for children.

Heading north toward the foothills you’ll find the Theodore Payne Foundation (theodorepayne.org) tucked into the chaparral on the west side of the Verdugo Mountains. This 22-acre Sun Valley site is dedicated to California native plants and wildflowers. There’s no fee to enter and dozens of picnic tables throughout the space are the perfect setting for an outdoor family meal. The nursery houses more than 600 varieties of California native plants, and there is a short hiking trail called Wild Flower Hill, an art gallery, gift shop and small bookstore. Educational programs and small festivals take place there throughout the year. The temperature can be very warm through most of the summer, so go early to avoid the heat.

Down in nearby Glendale, one of the main attractions on bustling Brand Boulevard is the Museum of Neon Art (neonmona.org), a unique museum especially popular with Instagrammers. The Sunset Strip, Hollywood Boulevard and Broadway in Downtown Los Angeles were neon meccas two decades before the Las Vegas Strip even existed, and the museum celebrates this history and spotlights new art created with neon tubes. Admission is $10 and kids under 12 are admitted free with a paying adult. Right across the street is the Americana at Brand, putting dozens of eateries (and a popular free Tuesday-morning kids’ club) within walking distance. A public parking lot one block north, next to the Glendale Central Library, offers three hours free parking if you validate at the library. 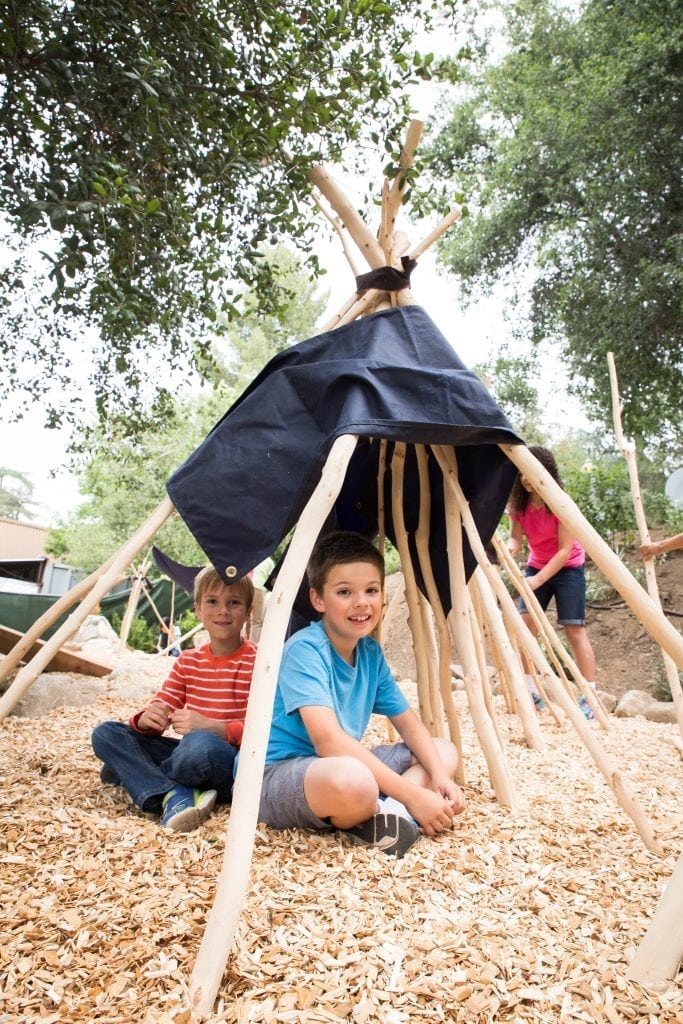 Head east to Pasadena to visit Kidspace Children’s Museum (kidspacemuseum.org), located near the Rose Bowl. Its mission, “to nurture the potential of all children through kid-driven experiences, inspiring them to become joyful, active learners,” is supported by expansive outdoor gardens complete with bees, butterflies, caterpillars, frogs, mud, rocks and lots of water. There’s even a “physics forest.” Bring sunscreen and a change of clothes, a towel and water shoes. Admission is $14 for everyone over age 1, parking is free and food and fun learning toys are available for purchase.

Dip south to Alhambra to find Fosselman’s Ice Cream (fosselmans.com), which dates to 1919 and is all that and an ice cream sundae. Perhaps you saw the family-owned shop featured on “Visiting with Huell Howser.” The décor and spirit of the space conjure up Norman Rockwell – and this impression is not too far off because Rockwell did live in Alhambra for a period in the 1930s. This throwback ice cream parlor – serving up more than 48 handmade flavors – remains as delicious as it’s ever been in the same way that In-N-Out Burger, Philippe’s, The Musso & Frank Grill and other old-school establishments like The Original Pantry Café still do. It also reflects the cultural diversity of the area with flavors such as Taro Root and Lychee. Make sure to go to the ATM on your way there, because Fosselman’s only accepts cash. 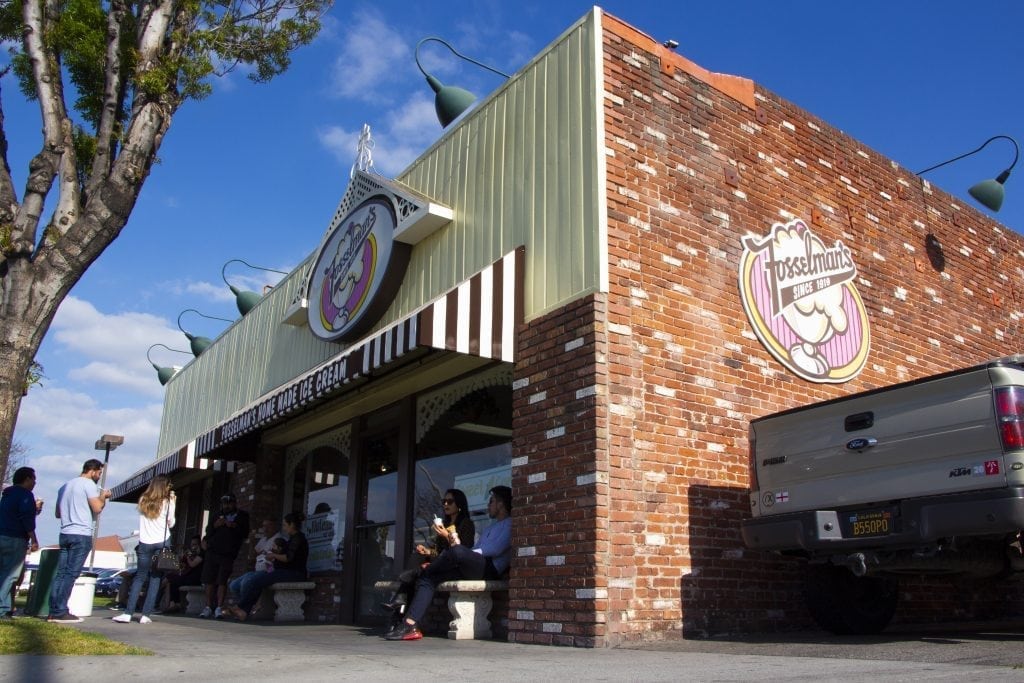 No SoCal summer would be complete without some time near the ocean. Among the dozens of beaches here, one of the nicest is Malibu Lagoon State Beach, also known as Surfrider Beach. Perhaps you have been to a wedding at the adjacent Adamson House (23200 Pacific Coast Hwy., adamsonhouse.org). It was Malibu’s first beach house, and the surrounding area is immaculately landscaped, complete with a beachside pool. You can take a tour of the Moorish-Revival historic home ($7 adults, $2 children, cash only) or you can just walk to the beach and take a dip in the Pacific. The lagoon is a sight to behold, Malibu Country Mart and Malibu Pier are nearby and the whole park makes for a great day trip.

Farther south, The Redondo Beach Pier (redondopier.com) is considered “the largest endless pier on the California Coast.” There are more than 50 establishments along the pier and at the adjacent Marina and International Boardwalk that offer oceanfront dining and souvenir shopping. Free community events there include a summer concert series, family movie nights, kite festivals, classic car shows and monthly yoga meet-ups. The popular arcade is closing later this year and a big renovation of the pier area is on the horizon, so get there this summer for some family fun.

Also in Redondo Beach is the South Bay Galleria, where you’ll find Wonder of Dinosaurs (wonderofdinosaurs.com), a two-floor site featuring more than 100 dinosaurs, 18 holes of miniature golf, kiddie rides and a dinosaur maze, train and carousel. Two of the most popular features are an archeological dig where kids can dig for “dinosaur bones” and a “Ride-A-TRex,” where kids saddle up and – you get it. Admission is $16-$18 for ages 2-12 and $8-$10 for adults, but there are also “happy hour” deals during the week. Some attractions have an add-on fee. The mix of activities should appeal to all ages. 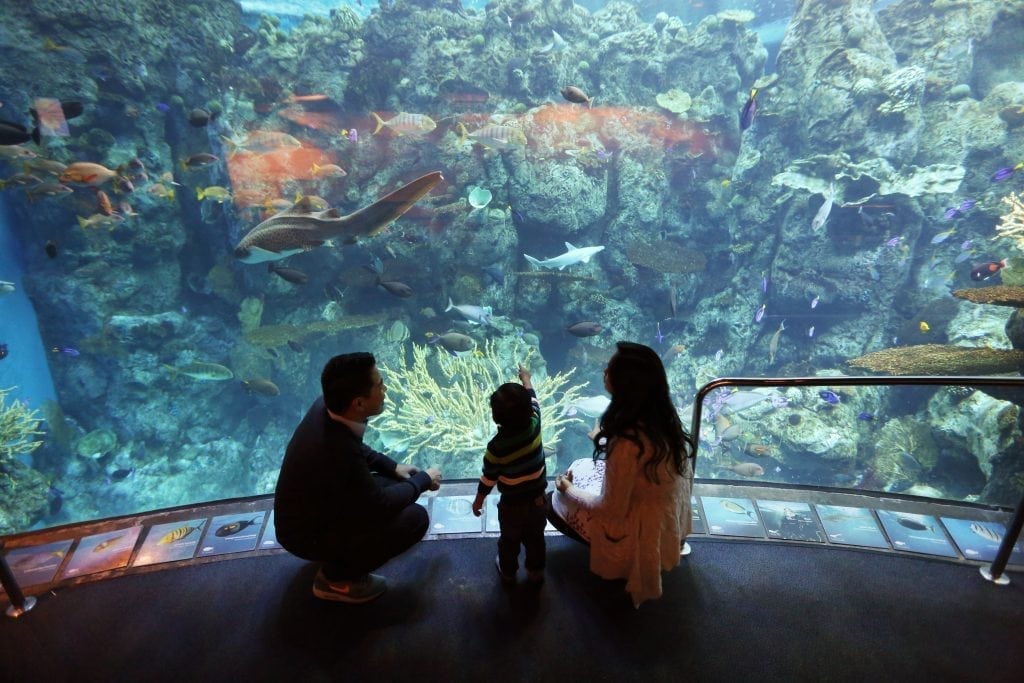 Continue south to Rainbow Park in Long Beach and treat the family to the Aquarium of the Pacific (aquariumofpacific.org). Housing more than 11,000 animals representing over 500 different species, the aquarium’s permanent galleries – the Southern California/Baja Gallery, the Northern Pacific Gallery and the Tropical Pacific Gallery – highlight the Pacific’s biodiversity and focus on conservation efforts taking place in each region. What a joy it is to see the penguins, scorpion fish, spider crabs, sea turtles, sea otters and zebra sharks up close. During Shark Lagoon Nights, which take place most Fridays from 6-9 p.m., admission is free. $17.95 ages 3-11, $29.95 adults.

These are just a few of the best family attractions around L.A. No matter where you choose to go, have a fantastic time out there with your family.

Mike Sonksen is a third-generation Angeleno, journalist, professor and poet whose work has been featured by KCET, the Academy of American Poets, Los Angeles Review of Books, Southern California Quarterly, Wax Poetics, the Los Angeles mayor’s office, the Los Angeles Public Library’s “Made in LA,” series and the Friends of the Los Angeles River. His forthcoming book is “I Am Still Alive in Los Angeles!”