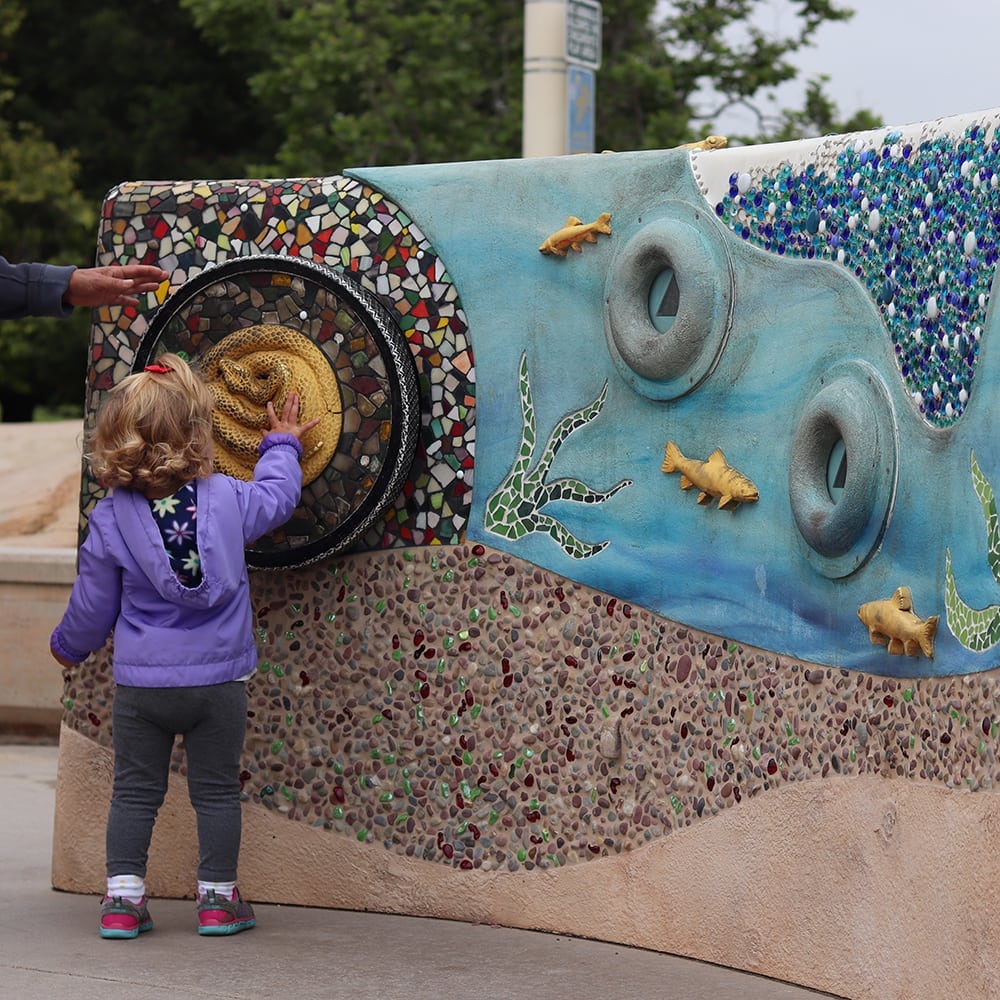 Right now, parents across the U.S. are feeling the subtle but ever-present tug of war between structured and unstructured time for their kids. The trend over the last few decades has been toward increasing amounts of scheduled activities for children in the interest of safety and student achievement. And despite a large body of recent research on the varied benefits and importance of free play, as well as unstructured play recommendations from the American Academy of Pediatrics, the pattern has been largely undisrupted.

Lauren Perelmuter, founder of Art To Grow On Children’s Art Center in Rolling Hills Estates, thinks it might be because unstructured play needs a better publicist. “The word ‘unstructured’ sounds negative, like something is left undone. It sounds like total chaos,” she says. “I like to use words like ‘child-led,’ ‘independent learning’ or ‘imagination-based creating.’”

Whatever it’s called, its positive outcomes are clear. “Unstructured play helps a child develop all of the skills they’ll need to be that engineer, or really whatever they want to be, because it helps them learn how to solve problems, how to socialize, how to be creative, how to handle the unexpected and make their own plans. It also helps them to self-regulate,” says Allie Ticktin, who uses play to support children’s development at Play 2 Progress, the play-based Westside learning center she founded.

Child-led playtime can happen anywhere, but if taken outdoors, the potential benefits are bumped up even more. “Something happens to our brains when we’re outside. Nature has a direct connection to the central nervous system and is calming, even for adults,” says Perelmuter. In a time when reports of anxiety and depression in children and teens seem to be on the rise, this sense of calm is essential. “With the pressure that kids have now, the rigidity in school and then all of the after-school classes and sports, it’s almost like a breath,” Perelmuter says. “They can breathe when they have unstructured play.”

Ticktin agrees. “During the week, I ask for a half hour a day,” she says, adding that it has to be actual child-led play, not time on the iPad or TV. “And then on the weekends, you have more time to take your child somewhere like a playground, where they can really work on that gross-motor play.”

Not all playgrounds are created equal when it comes to opportunities for creative exploration and problem solving. “I like things on a playground that are funkier, where a kid has to really look at it and figure out: How do I use this?” says Ticktin.

Fortunately, the L.A. area boasts a host of outstanding parks and playgrounds. If you are hesitant to loosen the reins at home, for fear that your kids’ game may turn into some version of “Who can be the first to break a lamp in the living room,” here are some prime spots for kids to explore.

When your Victorian physician has prescribed sea air… 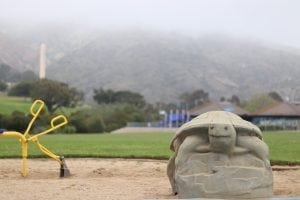 With 180-degree views of the ocean, tons of open green space and wildflowers along the periphery, this park makes it impossible not to feel a little bit lighter. The playground equipment is fairly sparse, but it’s set up in three separate stations, so kids will get some solid cardio just running from one play area to the next. The best spot features only a mechanical digger and a turtle statue, which would clearly be the items you would take if you were to be stranded on a desert island with only two prompters for unstructured play. 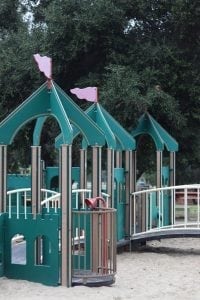 This is the first playground that the eponymous company built in the region back in 2000, but all 10 of its public playgrounds in and around L.A. are similarly creative and encourage exploration. (Check out shanes inspiration.org to find the one closest to you.) One of the main concepts behind these playgrounds is that they are fully accessible to children of all abilities. There are multiple types of swings and a maze of ramps. There are also many areas for pretend play, including a train, an airplane, a castle area and a dinosaur structure. The more in-depth exploring you do, the more highlights you discover, such as a periscope, a Braille clock and other elements to target different senses. 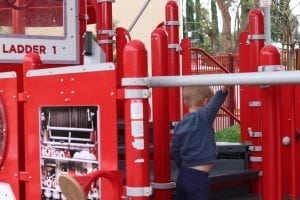 Budding firefighters will have ample opportunity to bring their rescue scenarios to life on this playground. The entire play area is designed to look like an elaborate fire engine, with places to steer, climb and slide. A bonus is that it is entirely covered by a shade structure, great for the smaller set in summer. And unlike other playgrounds on the list, this one is tiny and completely fenced in, which is ideal if you want to let your toddlers roam a little farther from the protective sphere of their caregiver. 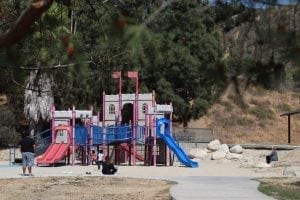 If your kids love to play princesses – or even court jesters – there’s a castle playground at Kenneth Hahn, complete with turrets, flags and a pseudo-drawbridge to spark little imaginations. This playground is also surrounded by options for the whole family – hiking trails, a basketball court, a smaller playground for toddlers, picnic pavilions and rolling hills of open space. Plus, just down the slope from the castle playground is a pond loaded with ducks and a babbling brook under a picturesque footbridge.

With Lake Balboa as a lovely backdrop for this playground, it is only appropriate that the equipment has a maritime theme. Another playground from the people at Shane’s Inspiration, it is fully accessible and fully fun. Perhaps the biggest structure in the playground is a play boat, which makes the giant shade sails suspended overhead seem like part of the nautical nature of it all. Separating the toddler area from the play space for ages 5-12, a sea-life wall has tactile features that trigger ocean sound effects. Large statues of a camel and an elephant play the role of adorably lost tourists in the otherwise coastal landscape.

When you can’t believe you missed the Met Gala… 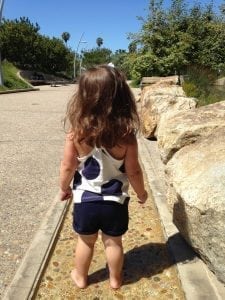 This park unleashes the curiosity of kids and parents alike, as it is part playground, part art installation. There are several unique and colorful sculptures that serve as both climbing structures and pretend shelters. In the center of the park, a series of slides swoop into a sunken area, where children can then wander over to a mini-splash pad. When they are ready to slide again, they take the rock wall back to the top. But if you have a toddler, you may never make it to these other elements, because your little one will be immediately fascinated by the extremely shallow stream that runs gently alongside the main path through the park, culminating in a tiered fountain.

When you’re sick of plastic in primary colors… 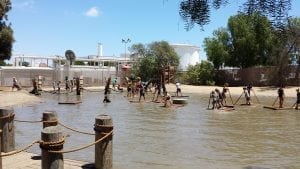 This playground is a child-led play mecca, but it is only open in the summertime, so be sure to make your pilgrimage before school starts again. Children can punt rafts over the surface of a small pond with long poles, or they can careen down a makeshift mudslide into the water. Pretend play flourishes as kids travel across the rope bridge. In the construction area, they can use creativity and sweat to build wooden treehouses with saws, hammers and nails (yes, you read that correctly!). Just prepare to get dirty, as that is essential for the fun.

Kate Korsh is an L.A.-based writer who spends lots of time out playing with her two kids.