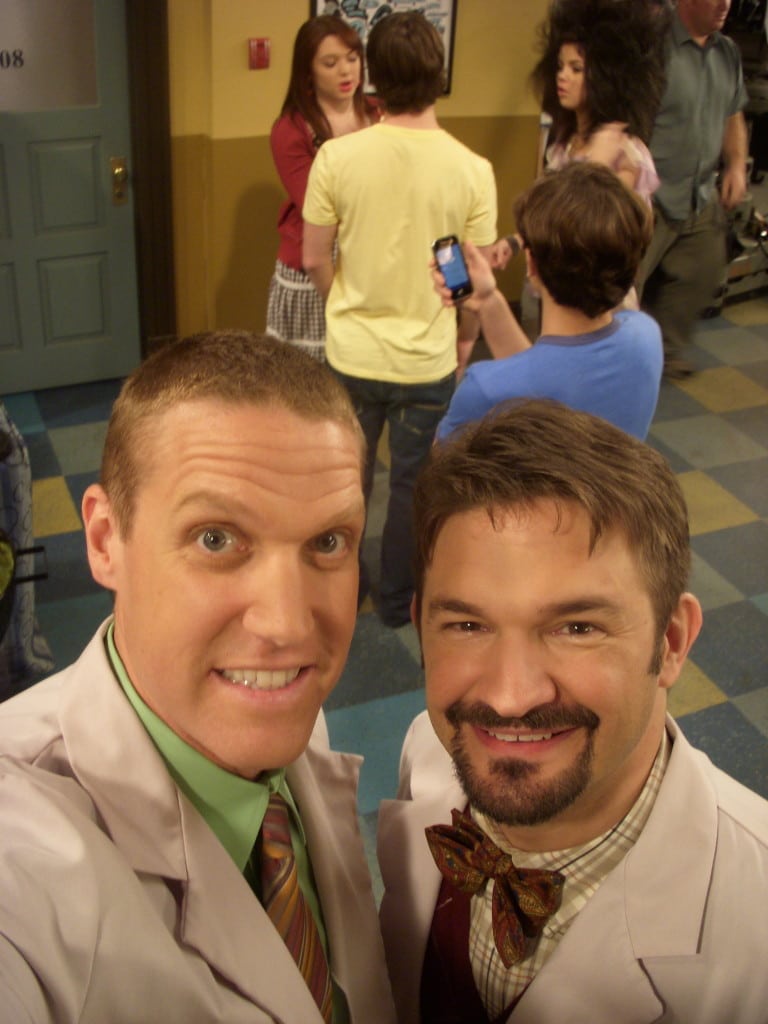 Ezra Weisz, left, and partner Darrin Butters warm up the set of “Wizards of Waverly Place” with Selena Gomez in the background. PHOTO COURTESY THOSE TWO WARMUP GUYS

If your kids have talked you into being part of a studio audience for one of their favorite TV shows, one of those common Los Angeles attractions, you might have spent time with hilarious, high-energy local dads Darrin Butters and Ezra Weisz, better known as Those Two Warm-Up Guys. For the past 12 years, Butters and Weisz have warmed up studio audiences for family television shows including “Wizards of Waverly Place,” “Good Luck Charlie,” “Austin & Ally” and “Instant Mom.” Weisz, who also teaches improv and voice, says their main job is to help the audience feel comfortable enough to laugh at the “laughable moments” of the episode. Butters has worked as a character animator for Disney for the past 18 years, and the two are brothers-in-law. He and Weisz want everyone in the audience to feel like they are a part of something special.

What do you do as Those Two Warm-Up Guys?

Ezra Weisz: Our job is to get the party in the audience started and keep it rolling for four hours. We make sure they behave, stay safe, and above all have an amazing and memorable night. Our main goal is to give each cast of actors the best audience ever.

How important is the studio audience in a live taping?

EW: The audience is major. If the writing is good and the audience is loving what they are watching, the entire experience is enhanced. The actors perk up, the timing gets tighter, everything just comes together. You are a part of television history when you sit and watch a show being taped. Your laughter is recorded and often times ends up on the air.

What do you think of the family television scene these days?

Darrin Butters: As the father of a kindergartener, I’m very impressed with children’s programming in general – some highly geared for learning, and others just bent on the ridiculous. My daughter swings wildly from “Bubble Guppies” to “Adventure Time.”

How has your extensive improv training and experience enhanced your parenting role?

DB: Improv is pretending and accepting. When my daughter says “Will you play with me?” the improviser in me answers “of course!” My improv background clicks in and I dive into whatever my daughter brings to the table. I’ve been able to show her the power of positivity and the beauty of the absurd.

Audience warm-up gigs belong primarily to solo stand-up comics. The two of you have a wonderful, unique way of working together as a team. Tell us about that.

EW: From early on, Darrin and I have had great performance chemistry. We started doing improv together and have a blast when we play. When I was offered the opportunity to warm up the audience for “Greetings From Tucson” (my first sitcom job), I wanted to make sure the evening would be a success. I knew that Darrin and I could successfully entertain an audience if we did it together. It worked from the start, and it keeps on working.

DB: I think it works because our fun is contagious. We work off of each other, conveying information about the show conversationally. I can ask a question that most people are wondering, and Ezra can answer my question, giving everyone the information. When you work alone, you can’t play “good cop/bad cop” or “comic/straight man” You’d think that with two of us, we’d be able to work half as hard. But I think we end up playing twice as hard. I love being able to do something that only a handful of people do. And being able to do that side-by-side with my brother-in-law and best friend. It doesn’t get much better.

Watch out for Those Two Warm Up Guys at a live studio taping near you!