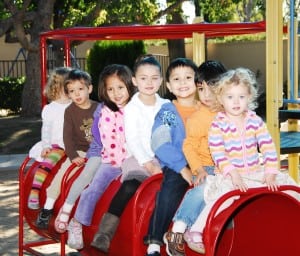 Students at The Boulevard School enjoy sunshine on the playground. PHOTO COURTESY THE BOULEVARD SCHOOL

I still kick myself for taking a rock away from my 2-year-old.

“You can’t carry a rock around other kids,” I explained, prying the flat, round object out of his hand. It was shellacked bright blue with a big “R” painted on it, a trinket we had once found on the ground. “Rigby rock” wasn’t a particularly special toy, but it was what he happened to choose before we left the house for preschool that morning.

Tears pouring down his pudgy cheeks, he wailed, “Wigby wock!” before collapsing into sobs. I pocketed the rock, kissed him and walked away as another woman picked up my little boy.

I waited until I got into my car before I let myself sob, too. It was his second day of school and I was doubting every decision I had ever made on his behalf.

“He’s going to cry, but that’s OK. You want that transition,” Tazneem Virani, director of Early Years Preschool in Sherman Oaks, had told us when we toured the school. Virani is one of several experts from Los Angeles schools that I spoke with for this story.

She had even warned us, correctly, that while day one would be smooth, the tears would fall on the second day. And the third. And for many days thereafter. On the first day, kids are so caught up in the toys and new faces that they barely notice when you give them a big kiss and a cheerful goodbye. But then it clicks that you, the person they’ve put all their trust in, are leaving. Maybe forever.

“The preparation process needs to start before they even begin school,” explains Virani. “Once you decide to send your child to school, begin to mentally prepare them. Talk to them about it, visit a couple of times and read them books.” 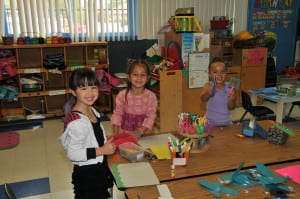 Preschools give young children a chance to develop skills together. PHOTO COURTESY THE BOULEVARD SCHOOL

What about that awful goodbye, the one that makes you question everything about formal education and loathe yourself for pushing your tiny creature out of the nest too soon?

“Don’t linger and don’t try to sneak out,” says Virani. “Always have a ritual of saying, ‘Goodbye, I will be back soon, and you’re going to have a good day.’”

Virani also suggests being consistent with the time that you drop off and pick up your child from school. If your child usually arrives during free-play time and, one day, you’re running late and everyone is already sitting quietly in a circle, what seems like just a few minutes delay to you can really throw a child off for the day.

Any life change, even one that seems minute to adults, can trigger a drop-off setback in little ones. I learned this a year after my son started school. He had fully transitioned and loved his friends and teachers. Then I switched jobs, which meant being more rushed in the mornings and getting home a little later at night. For two months straight, my son cried buckets when I dropped him off at school.

“If there has been any change in routine, we encourage the parents to tell us because it really does affect them,” says Rodi Vogel, preschool director at The Boulevard School in Woodland Hills, which has been in operation for more than 40 years. “A new job, if a parent is away, even if people are visiting — change is hard for them, so we’ll give them a lot of TLC.” 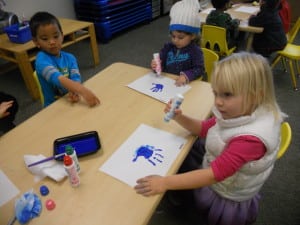 The reason I still kick myself over that little blue rock is that I know now that familiar items can make goodbyes much easier on insecure preschoolers. A transitional object is a special comfort, a little piece of home that can help them ease from dependence to independence.

“It’s like Linus and his blanket, something to feel secure with,” explains Miguel Brizuela, a clinical psychologist who specializes in working with families and children. His son, Bryce, went through such severe separation anxiety that it took him a year to fully transition.

“It really humbled me, both as a professional and a parent,” says Brizuela. “It’s a difficult process, and you feed off your child’s energy. But anxiety is a part of life and it’s our job to contain that.”

In addition to offering transitional objects, Brizuela showed his son a family photograph when dropping him off and gave reassurances that Mommy or Daddy would be back later. In the evenings, the family would talk about what to expect the next day, referring to other children and teachers by name. Early in the process, Brizuela brought home educational toys to mimic the preschool environment and frequently drove past the school to familiarize his anxious son with the setting.

Even the occasional reward can help. “We’ll give Bryce specific instructions like, ‘Use your words to show how you feel, sit down quietly and follow directions.’ If he’s had a good day, he gets a little treat,” says Brizuela. 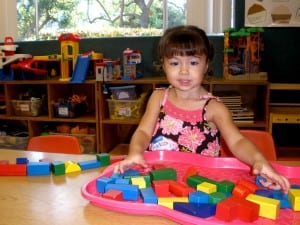 Expect your preschooler’s vocabulary to quickly multiply in this new environment. PHOTO COURTESY THE BOULEVARD SCHOOL

OK, so you’ve helped your child weather the change of going to preschool. How will preschool change your child?

“The first thing you can expect to see is that their language skills really blossom,” says Vogel. “Parents may talk and engage with their kids at home, but it’s nothing compared to being surrounded by children.”

A typical 2-year-old vocabulary of 50-80 words can quickly explode into hundreds, along with complete sentences, descriptions, questions and songs. (Many, many songs.)

“As they begin learning letters and songs, it pushes them to go further and they want to learn more and more,” says Vogel, who has worked at The Boulevard School since 1988 (but actually “grew up” at the school, as her mother was also an employee there).

With that grasp of language also comes something crucial: the ability to use words instead of physicality (pushing, hitting or biting) to communicate.

“At any age, we encourage children to have social skills and use their words to handle conflict,” says Tonia Good, preschool director at the Beverly Hills campus of Page Private School. “Instead of fighting over a toy, we want a child to say, ‘I was using that.’ At this age, children are ‘me me me’ and you want them to use their words or know to ask a teacher for help.”

That advice brought me back to a moment when I saw two little girls at school shoo my son away from the game they were playing. While my mama bear instinct was to intervene, I held back and simply hoped the slight didn’t bother my son in the same way.

“No, you don’t have to ignore it,” says Vogel. “As a parent, you can say, ‘Did you hear what your friend just said? What do you think? Let’s go tell your friend that’s not nice.’ You want to empower children to stand up for themselves.” 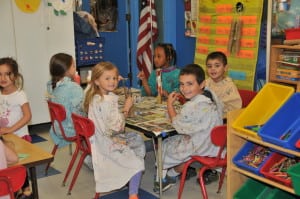 Along with these basic social graces comes a skill so important — and so wonderful — that it’s practically worth the price of preschool admission on its own: cleaning up after themselves.

As parents, we’re accustomed to catering to the needs of tiny people and, let’s face it, it’s a lot faster to do most things ourselves. But, when encouraged by busy preschool teachers, it turns out that 2- and 3-year-olds love the responsibility of doing things for themselves. Just imagine a child who’s not only jazzed about putting away his or her toys, but who does it while singing the “Clean Up” song.

“Preschool isn’t just baby day care,” says Janice Kim, school director of Page Private School. “We believe even at age 2 or 3, they can achieve being disciplined and independent at the next level.”

Experts suggest reinforcing independent behavior at home (yes, things will take longer) and cementing preschoolers’ abilities by queuing up multi-step tasks. By age 3, children should be able to follow three-step directions and by age 4, four-step directions should be manageable.

That said, every child develops differently, which is where the inevitable comparisons enter the picture. It’s impossible not to do a side-by-side of your child versus his or her peers. Who has a bigger vocabulary? Which ones are jumping around during play time versus quietly stacking blocks? And what’s up with the kid who just dumped a bowl of Cheerios on the table?

“A parent came to me and said, ‘My child is dyslexic,’ and I said, ‘Your child is 3 years old!’” laughs Vogel. “There may be something going on, but it’s way too early, so we tell them to relax and don’t compare with other kids.”

Ready To Take On the World 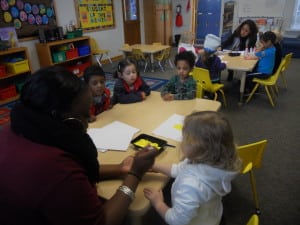 Even as I marvel over my child’s language skills and delight in the fact that he talks so fondly about his friends and teachers, I often wonder whether we are pushing him too hard and too early. What happened to letting young kids enjoy being kids?

What happened is that kindergarten changed, each preschool director agrees.

“Kindergarten programs are much more accelerated,” says Vogel. “When I was in school, it was play based, and now they are expected to sit, listen, write and recognize shapes and letters.”

While preschool isn’t necessarily “required” for kids ages 2 or 3, it’s highly encouraged that 4- and 5-year-olds have formal preschool or pre-kindergarten education to help prepare them academically and behaviorally for kindergarten.

As for Bryce, the little boy who struggled for so long with anxiety, his parents remain consistent and focused in their goals. Part of their motivation is to make sure their son is prepared for kindergarten when the time comes, and it’s also about the bigger picture.

“Preschool is the first baby step toward independence,” says Brizuela. “There’s a whole world out there, and I want him to be secure enough to go out there and explore. Home will always be there for him.”

Sarika Chawla is a local writer, L.A. Parent contributor and mom to a preschooler.