Pasadena’s Club 21 opens its arms, and reaches out a lifeline, for families of children with Down syndrome

Sixteen years ago, Nancy Litteken’s obstetrician told her this: “Don’t worry. We can take care of it.”

He meant that they could abort the baby she was carrying because the results of her amniocentesis test showed that the baby would be born with Down syndrome. “At that time, people who took an amnio took it to terminate,” she says. “If they weren’t prepared to terminate, they didn’t want to risk the amnio.” But Litteken and her husband weren’t going to make up their minds that easily. 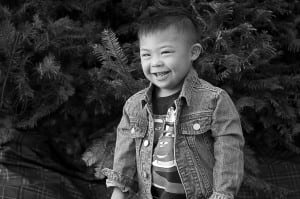 Litteken, the hearing child of deaf parents, has a Master’s degree in special education and had already put in many years with the L.A. Unified School District, so she had some idea of what she was facing. But she wanted to know more. She asked the geneticist who had performed the amnio to put her in touch with couples who had faced this same decision and carried their babies to term. “Two weeks went by with no call,” Litteken says. “Finally, they told us they didn’t call because they couldn’t find another family who had kept their baby.”

The Littekens did decide to keep their baby, and Molly was born. “Community is very powerful, so I guess we’re going to have to figure out community with this new baby,” Nancy told her husband. As she dove into the world of doctor visits and therapies with Molly, she began to meet other moms who had children with Down syndrome and finally, in 2007, she invited them to her house for a chat.

Around Litteken’s dining room table, the women discussed their hopes and dreams for their children, and what they would have to do to make them come true. They began meeting every week, and within a year and a half had planned, publicized and hosted a one-day conference on Down syndrome that they called “Tools For the Journey.” They expected 60 or 70 people, but more than 200 showed up. By the time the second conference was organized a year later, it was clear that an ongoing resources was needed, and Club 21 was born. 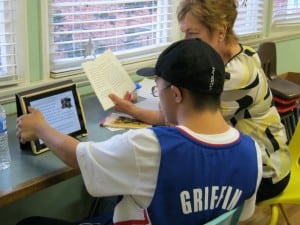 Litteken says the goal of Club 21 Learning and Resource Center Inc. – so named because Down syndrome is caused by an abnormality of the 21st chromosome – is to advocate for access, inclusion and independence for people with Down syndrome. Because Down syndrome isn’t a disease and doesn’t have a cure, she says their mission is different from those of other organizations dedicated to special needs. “It’s not like autism,” she says. “With autism, you’re fighting for a cure. Our journey is about acceptance and advocating.”

Through the courtyard and up the back stairs of Pasadena Covenant Church (“we are not a faith-based organization, though many of us have faith,” Litteken smiles), in rooms filled with colorful educational materials of every sort, Club 21 feeds out what amounts to a lifeline for families that drive for two hours and more to connect there. The walls are lined with beautiful, carefully framed color photos of children with Down syndrome who seem to dare the viewer not to smile back.

The organization’s support kicks in right from the beginning, offering the type of resource Litteken was looking for during her own pregnancy. Newly trained are 25 “first call” parents now available to meet with families who have just received news that they are pregnant with a baby who has Down syndrome.

For those couples, what Club 21 seeks to offer are the facts. “It’s very important to me that families have choice, and that they hear accurate, up-to-date, current information,” Litteken insists. “We’re not about convincing.” She does, however, hope that couples will look beyond the diagnosis and think about their child as a whole. “A pre-diagnosis tells you about the diagnosis, but it does not tell you about who your child will be,” she says. “This is a child who’s going to be more like you than different.”

New parents of babies with Down syndrome who find their way to Club 21 will be greeted with a phrase they don’t hear often. Most people they meet are likely to say something along the lines of, “I’m so sorry,” but not Club 21 members. “The first thing we say is, congratulations on your beautiful baby,” Litteken says.

Then it’s time to get to work. Because Litteken’s advice, even if you’re still holding a newborn, is this: Have a vision now of what you want for your child in 25 years. 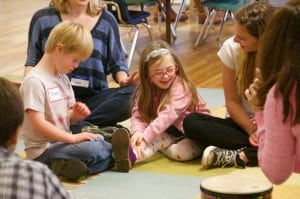 Litteken’s vision for Molly is pretty uncomplicated: The chance to grow up, live independently and hold down a job. And to do that – for even something as simple as a job in a supermarket – she needs to be included now, not secluded in a separate classroom or special day class. “The real world doesn’t have special-needs supermarkets,” Litteken says.

It’s not surprising then, that most of Club 21’s programs are centered around education and helping children with Down syndrome fit into regular classrooms.

Core academic-skills classes include Every Child a Reader, which is a one-on-one literacy tutoring program; and Club Connections, small-group enrichment classes. Joy Domingo, Learning Program Specialist, says that she has seen children who began the program not reading at all master 99 words after just a year. The key, both Domingo and Litteken say, is incorporating enough repetition to overcome the short-term memory problems in children with Down syndrome.

The program’s success often wins over skeptical parents. “When they see their kids read, they’re 100-percent on board,” Domingo says.

Club 21’s Mod Pod is a library and resource center that stockpiles tools and technology to help classroom teachers modify curriculum to support students with Down syndrome. New information about educating these kids is coming out, most of it from the U.K., but not much makes its way into schools. “There’s very little done to teach teachers how to teach kids with Down syndrome,” Litteken says.

By gathering resources and presenting them to parents and teachers the organization is working to gradually create change. They can even send a specialist to do a school or classroom consultation.

Club 21 also offers an annual conference and a host of practical workshops. And there are play groups for siblings and a group just for dads. There is an annual membership fee, and a small charge for some programs, but Litteken says they have never turned a family away for financial reasons. 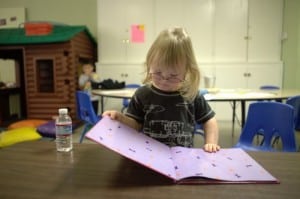 The crux of their work, though, is more subtle than sharing a piece of research or an academic strategy. Because the true work of Club 21 is in changing attitudes.

One way is to take the long view – the very long view. They know, for instance, that people who have a positive image of someone with Down syndrome from earlier in their lives react much differently to the news that they are carrying a baby with Down syndrome than those without that positive image do. And that could mean the difference between carrying a baby to term and ending the pregnancy. “That is why we are very big on volunteers coming here,” Litteken says. The idea is to educate new generations about Down syndrome, and forge connections that will pay off well into the future.

Attitudes factor in the classroom and around the tutoring table as well. The tendency, according to Litteken, is for parents or teachers to try a therapy or teaching method, then assume that if the child doesn’t learn it is because the child isn’t capable. The key to success, she has found, is to assume that the child isn’t learning because you haven’t yet found the right teaching method. “We have to presume competence,” she says. 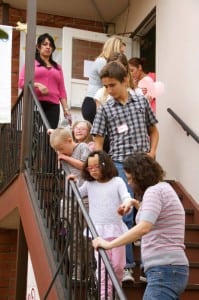 Confronted with a challenge such as a double diagnosis of Down syndrome and autism, the teachers, tutors and parents at Club 21 come together, share information and figure out possible solutions. Not that those solutions come easily – especially for the moms and dads who end up doing much of the work. Each Club 21 program has a parent component, and for every hour spent with a Club 21 tutor, many more hours of work and practice are needed at home.

Domingo promises that Club 21 parents all receive careful, step-by-step instruction and tons of support so that they know exactly what they need to do. “They do start out very overwhelmed,” she says. “We try so hard just to build the parents’ confidence.” The payoff is one of Domingo’s favorite parts of working at Club 21, the chance to see these parents feeling proud of their kids.

“They cry and they rejoice together. I don’t have a child with Down syndrome, and sometimes,” Domingo says, “I feel left out.”