Joey Green, co-author of the new middle-grade sci-fi fantasy, “Not So Normal Norbert,” is one funny guy.

His resume includes working as a “National Lampoon” writer and as a copywriter at the New York advertising agency J. Walter Thompson. His boss at the agency was a guy named Jim who occasionally wrote murder mystery books. “Jim became James Patterson. I became the author of more than 60 books, mostly humor,” says Green.

Several years ago, Patterson invited Green to write a murder mystery book with him. “Murder isn’t really my thing,” Green says, “so I asked, ‘Can I be funny?’ He said, ‘Maybe a kid’s book would be better.’” Patterson told Green about his children’s book “Jacky Ha-Ha” and his mission to get kids excited about reading by creating funny, exciting books through his new Jimmy Patterson imprint. As a parent who believes funny books turn kids into serious readers, Green was game. 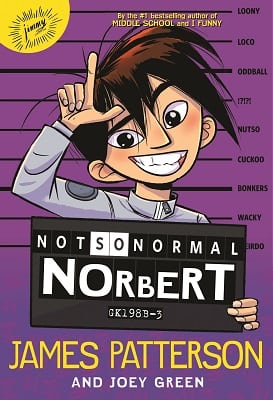 Green describes his first foray into kid lit with Patterson as a funny adventure that’s anything but normal. In the future, the Earth is a country called the United State of Earth, run by a dictator named Loving Leader. With conformity as king, individuality is outlawed. “Anyone creative or imaginative is considered crazy and a criminal. Different is dangerous! Creativity is crazy! Imagination is insanity!” Green says of the book. A kid named Norbert, unaware he’s funny and creative, gets arrested and sent to Astro-Nuts Prison, where he discovers that everyone is creative and imaginative.

After penning a plethora of funny titles for adults, Green says he found it rewarding and liberating to write for kids. “I could let my imagination soar,” he says. “Kids tend to be more receptive to nonsense, whimsy and wacky flights of fancy than adults are.” He hopes his book helps kids and parents discover how to celebrate creativity and find healthy outlets to encourage and nurture it.