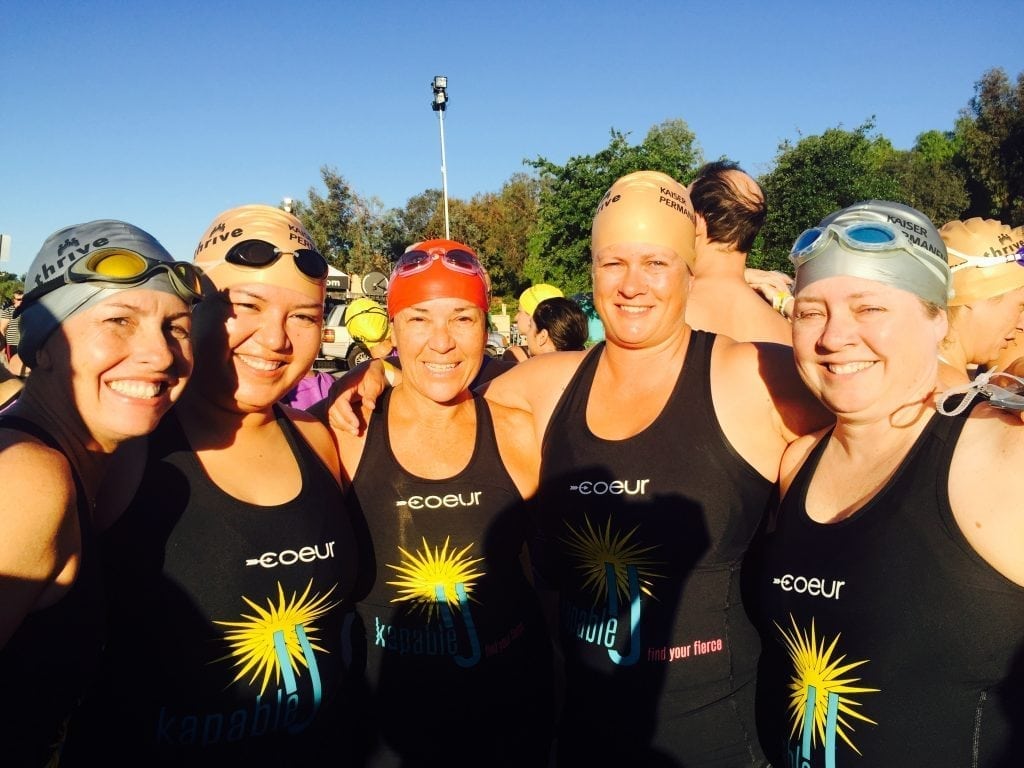 As a child, I took to sports with enthusiasm and fortitude. While I was never the strongest member of my teams and I was usually the shortest, the one thing I had on my side was speed. My pint-size demeanor combined with a lifetime of walking twice as fast to keep up with the longer legs in my life to create an all-star soccer and softball player.

But that was in the 1980s and ’90s, before I became more concerned with the perfect position of my ponytail than a perfect performance as shortstop. In my evolution through adolescence, my athleticism took a backseat to books and boys and Bonne Bell Lip Smackers. By 17, I had retired my cleats and – until a few months ago when my 10-year-old son challenged me to a foot race – the idea of running was something I’d consider doing only if I were being chased.

To say I was out of shape is an understatement. To say my son won the race is a given. What I didn’t anticipate was the loud cheering section of other moms at the park, rooting for me to win. I found my inner sporty mom that day, and it turns out there are tons of other sporty moms in Los Angeles leading the way.

The first mom I interviewed set the sporty-mom bar pretty high. On skates, she wows cheering crowds as a member of the premiere all-female roller derby league, the L.A. Derby Dolls. Barbara Sazama (aka Sweet Home AlaBAMMya, aka Sweetie) claims she is an athlete for the first time in her life. She credits roller derby for broadening her social circle, enhancing her confidence and giving her the mental space to be herself.

“Women are told from a young age to play nice, don’t be aggressive, don’t take up space, be delicate,” Sazama says. “Roller derby allows us to throw all that aside. It allows us to shed years, sometimes decades, of ‘I can’t.’ Taking up space is a goal. Aggression is needed. Strength is prized.”

It doesn’t hurt for Sazama’s daughters to see her achieving what she wants. Her oldest has started to play, too, and sometimes they even compare bruises. Sazama admits that fitting roller derby into her busy schedule can be a challenge, but she has also learned that taking this time for herself, with the support of her husband and kids, makes her a better mom. “When playing, whatever is bothering me has to be left behind for that time,” she says. “After that, I often find my frustrations are less, and problems seem easier to solve.” 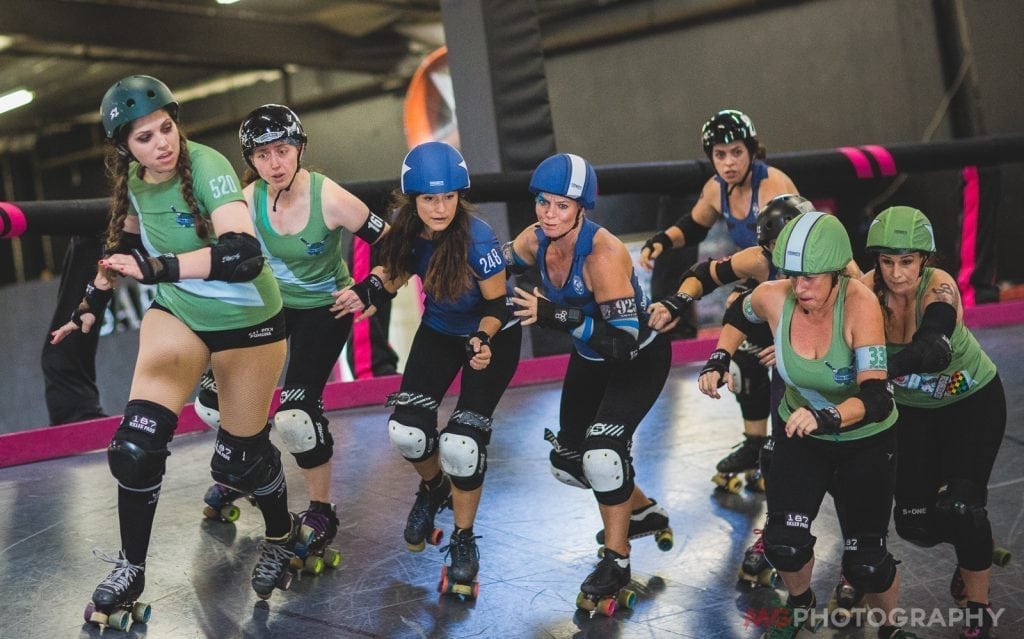 There is an eight-week program for would-be Derby Dolls, called Derby Por Vida, that gets skaters started at $15 per class. Sazama started the program at the age of 40, joking, “It was the best mid-life crisis ever!” She is now beginning her third year as a home-team skater with the Sirens and her first on the All-Star team. Her takeaway: “Everything is better on roller skates.”

Running, Cycling and Swimming! Oh, My!

The next mom sure to inspire is Ann-Marie Hobbs, a former college softball player for Loyola Marymount University who acknowledges that she is a natural athlete. Hobbs found herself reclaiming her inner sporty mom following a 10-year hiatus from athletic activity.

The demands of her life as a mother, wife and dean of a local middle school were more than enough to keep her busy, but Hobbs says her mom friend, “Iron Man” Kirsten Bell, is responsible for her return to a life of fitness. She joined a group, led by Bell, that boasted a goal of running a 5K in 10 weeks. Despite being initially unconvinced that she could do such a thing, Hobbs ran the 3.1 miles and before she knew it was running 10Ks, too.

It seems some good music, some running shoes and a crew of steadfast sporty moms can carry you places you never even imagined. Hobbs now competes in triathlons. The moms in her group range in age from 38-55 and have varying body types reflecting the diversity of a post-kid mom bod. “I want other moms to know you don’t have to be skinny or young to be fit. You just have to be willing,” Hobbs says.

For the last five years, the group has been meeting up twice a week, setting goals and reaching them while also getting much of the sanity-sustaining support that female friendship fortunately provides. One highlight is a spring ride in Ojai, a 60-mile race where the rest of the weekend is spent cooking, drinking wine and laughing. Asked how she fits her training regimen into her busy life, Hobbs offers up something all moms can relate to: “It’s a great way to start the day, and it’s a lot easier to get up and work out at 6 a.m. when you know a friend is going to be there waiting for you. If it is an evening run, it is also a great way to get out of the bedtime routine – at least for one night a week.” 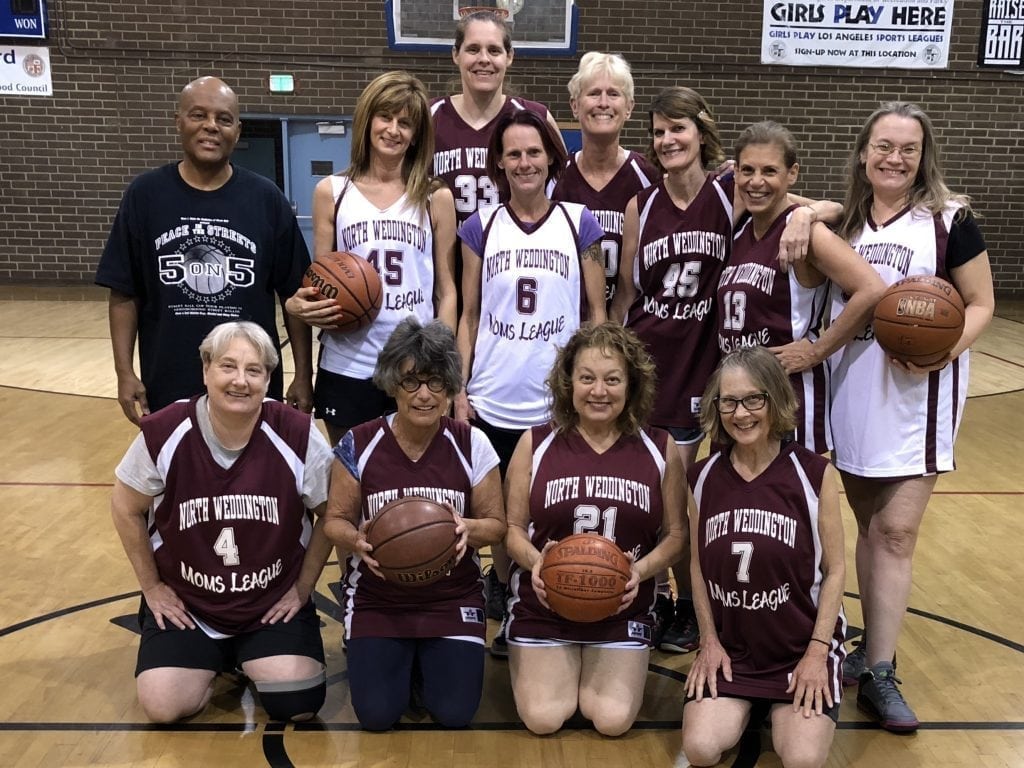 Judy Nazemetz, front row, third from left, has been playing basketball with other moms for 17 years. PHOTO COURTESY JUDY NAZEMETZ

In our city of historic basketball dynasties, it’s only fitting to interview a sporty mom whose sport of choice is basketball. Judy Nazemetz has been playing on her North Weddington Mom’s League team for 17 years. It started when a fellow mom realized she didn’t just want to sit on the sidelines and watch her child play. She wanted to play. Other moms wanted to play, too, and just like that a league was born.

Competition, fitness, running, stopping, guarding, jumping, falling and getting back up again are obvious components of the sport, but Nazemetz and her teammates have found others. “We’re not dead yet. We are active moms,” she says. “We’re able to get away from our busy schedules and spend a couple of hours doing what we love. And it means we can still run. OK, maybe not as fast as we did when we were younger, but we run.”

Nazemetz says the discipline of playing a sport with rules feels good and keeps her focused, and that she enjoys the element of surprise when she tells people she plays basketball. They are stunned. “You?” they say. “You’re so short.” That’s another awesome thing about being part of a team. No one is perfect. Some have never even played the game, but with love, laughter and their coach leading the way, these moms make sure their families know Friday night is Mom’s League Night. If you would like to join, just show up at the gym (North Weddington Recrecation Center, 10844 Acama St., North Hollywood). And bring your sneakers. “You might just get put in the game,” Nazemetz says.

For those sporty moms who can’t find the time to get away from the kids, Hike it Baby, a nonprofit hiking organization, might be the right path. Hike it Baby is dedicated to getting families – especially those with kids from birth to school age – on the trail together and raising a generation that loves the outdoors.

Julia Martin-Wrobel, brand ambassador for the West L.A. division, says hiking is a great sport for new moms. “You get an amazing workout, you’re exposing your kid to nature and creating a community as well,” she says. “When walking in nature, anything can happen. It creates a bond and fast-forwards a relationship through movement and exercise. For those looking to find their mom group, it is a lot easier getting to know each other in the open air than in a coffee shop.” 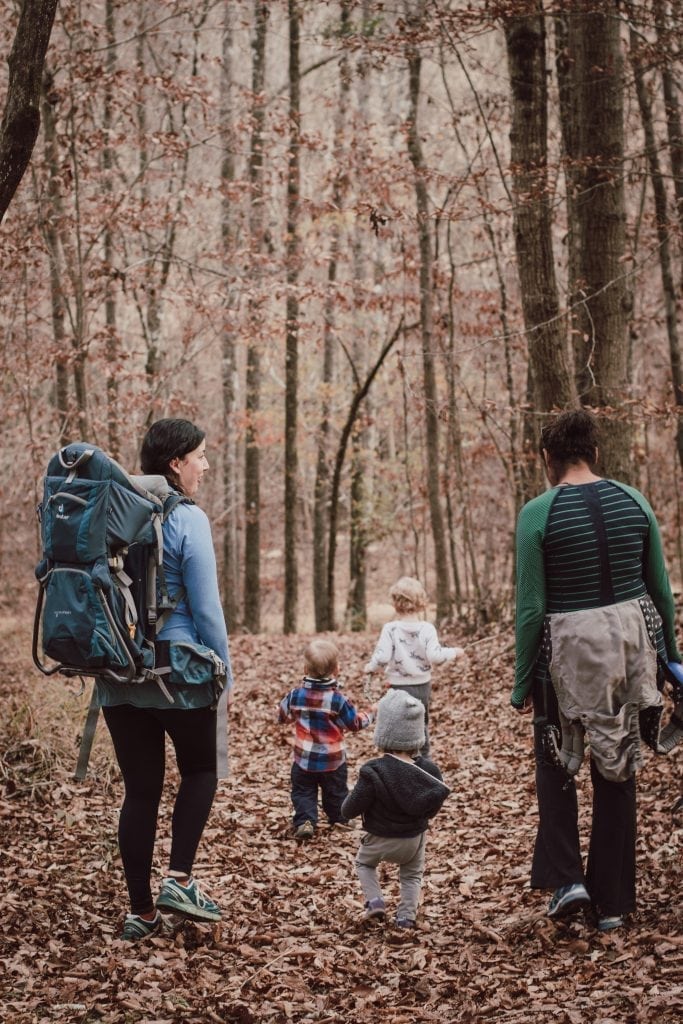 The nonprofit Hike It Baby is focused on getting moms and their kids on the trail together. PHOTO BY KRISTIN HINNANT

The Hike it Baby story is as inspiring as a good hike, because the organization is built on the contagious energy of moms. One mom tells another mom, who tells another, and before you know it, there are 30 moms (and some dads, too) hiking with their kids. In this way, founder Shanti Hodges has grown the group from a small circle of friends in Venice to a national organization that brings thousands of families onto the trails together. With “leave no family behind” as one of their leading values, Hike It Baby has touched the lives of more than 180,000 families. To join in the fun, check them out at www.hikeitbaby.com.

The last mom I interviewed embodies everything a sporty mom represents: choosing self-care while caring for others and giving oneself permission to fly. Cynthia MacPhee found her way to aerial acrobatics during a time where she needed to rediscover herself. Inspired by watching the aerial choreography of Grammy Award-winning artist Pink, MacPhee took to Google and found that L.A. is full of places for those interested in the art of aerial acrobatics.

MacPhee didn’t have a dance or gymnastics background, but liked to dive as a child and loved to climb trees well into adulthood. Her appetite for heights makes her a perfect match for the sport she describes as “life-giving.” She credits aerial acrobatics with helping her find her soul again.

As the mom of a child with autism (who has matured, at 23, into a brave and responsible young adult) and as a two-time cancer survivor, it’s only fitting that MacPhee has chosen a sport that’s all about rising to meet challenges – challenges that urge her to soar. “When I have a day that has aerial in it, it gives me so much joy,” she says. 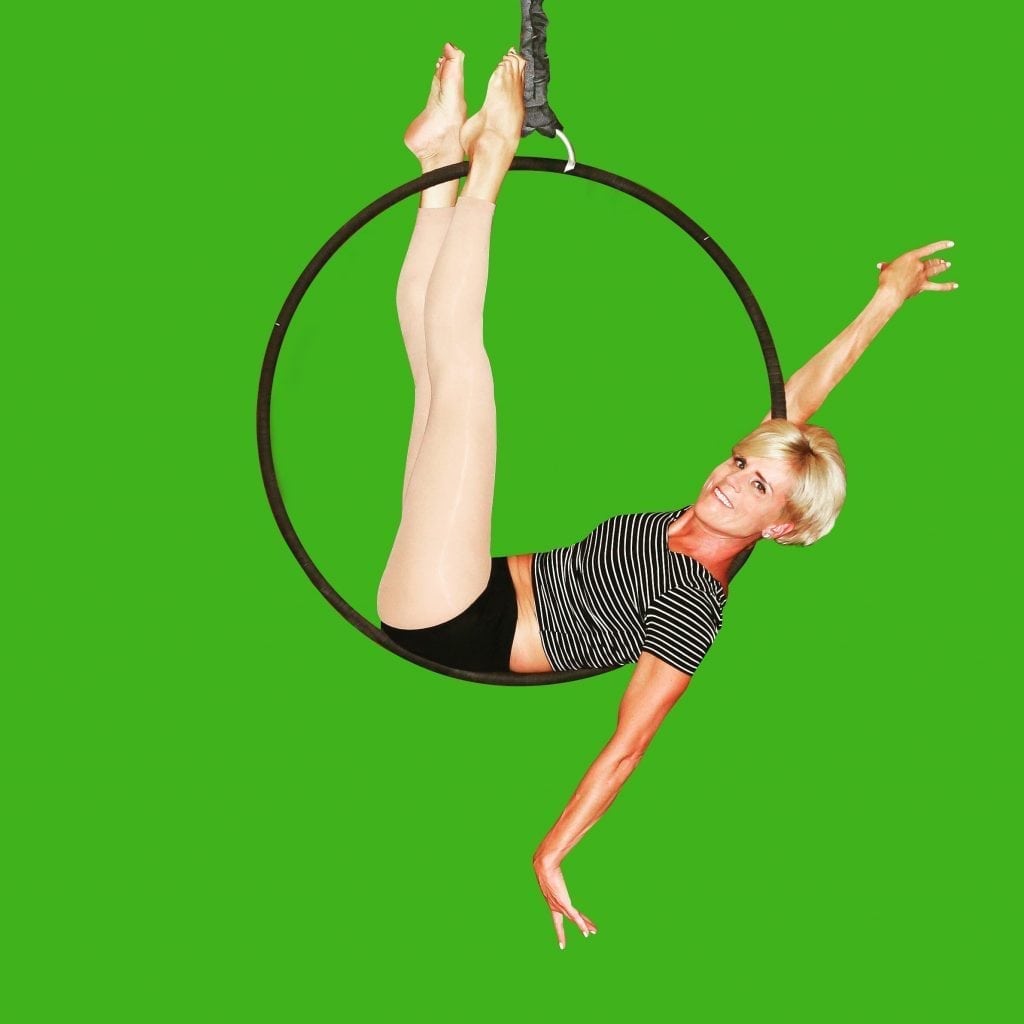 In 2012, MacPhee also set a goal to bring in money with her aerial acrobatics. That same year, she was invited to teach her first aerial class. She now teaches regularly, turning her passion into a way of life and discovering that she can once again do the splits. If you’re up for the challenge, you can find MacPhee at Aerial Physique in mid-city L.A.

So now the call goes out to you, sporty moms: will you skate, run, swim, ride, dribble, hike or learn to fly? You’ve stood on the sidelines for far too long! It’s now your chance to make the team. Maybe the kids can even be in charge of post-game snacks, for I’m certain you’ve sliced your fair share of oranges.

Ryane Nicole Granados is a Los Angeles native whose work has been featured in The Manifest-Station, Mutha Magazine, The Good Men Project, Expressing Motherhood, The Nervous Breakdown, Scary Mommy and L.A. Parent. Inspired by her research for this article, she is also working on being a sporty mom.