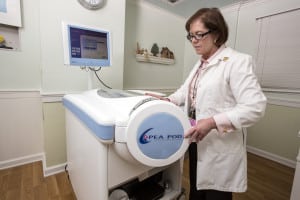 Cedars-Sinai is using new devices to personalize the nutritional supplements of the smallest babies in the hospital’s neonatal intensive care unit, part of the Maxine Dunitz Children’s Health Center. Doctors have begun using a device known as the Pea Pod to measure the body composition of these infants, improving the children’s health. Resembling a mini MRI machine, the Pea Pod uses air displacement to calculate the percentage of each infant’s weight that is fat and the percentage that is lean body mass. Infants are placed inside the heated machine for approximately three minutes. 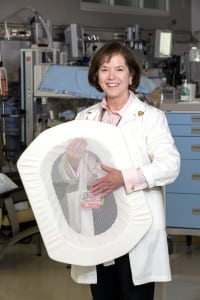 Ellen Mack, RNC, holds the Lifenest mattress. “We are interested in these mnattresses because with the lower surface tension we expect less risk of head flattening and less risk for pressure sores,” she says.

“The Pea Pod is important in helping the NICU team facilitate a healthy weight gain in the smallest infants by calculating the amount of lean mass and body fat in the infant on a daily or weekly basis,” says Charles Simmons, MD, chair of the Department of Pediatrics and director of the Division of Neonatology. There are only seven Pea Pods in use throughout the world.

Cedars-Sinai is also continuing a study of breast milk composition, using a biochemical device to analyze the percentages of fat, protein and carbohydrate in the milk. Improvements in nutrition should also lead to better neurological outcomes and shorter hospital stays for babies in the NICU.

In addition to improving nutrition, Cedars-Sinai has also begun using specially designed mattresses to help improve sleep patterns and head shape in premature babies. The mattress, known as Lifenest, has netting in the center that is intended to reduce pressure on different areas of a baby’s body, including the head. This could reduce babies’ risk of plagiocephaly, commonly known as flat head, which has become much more common since the 1990s, when experts began recommending that babies be placed on their backs to sleep to reduce the risk of sudden infant death syndrome.

“Together, these new technologies are helping us reduce the babies’ stay in the NICU,” says Simmons, “and sending them home to their families, where they belong.”

Learn more about Cedars-Sinai at www.cedars-sinai.edu.