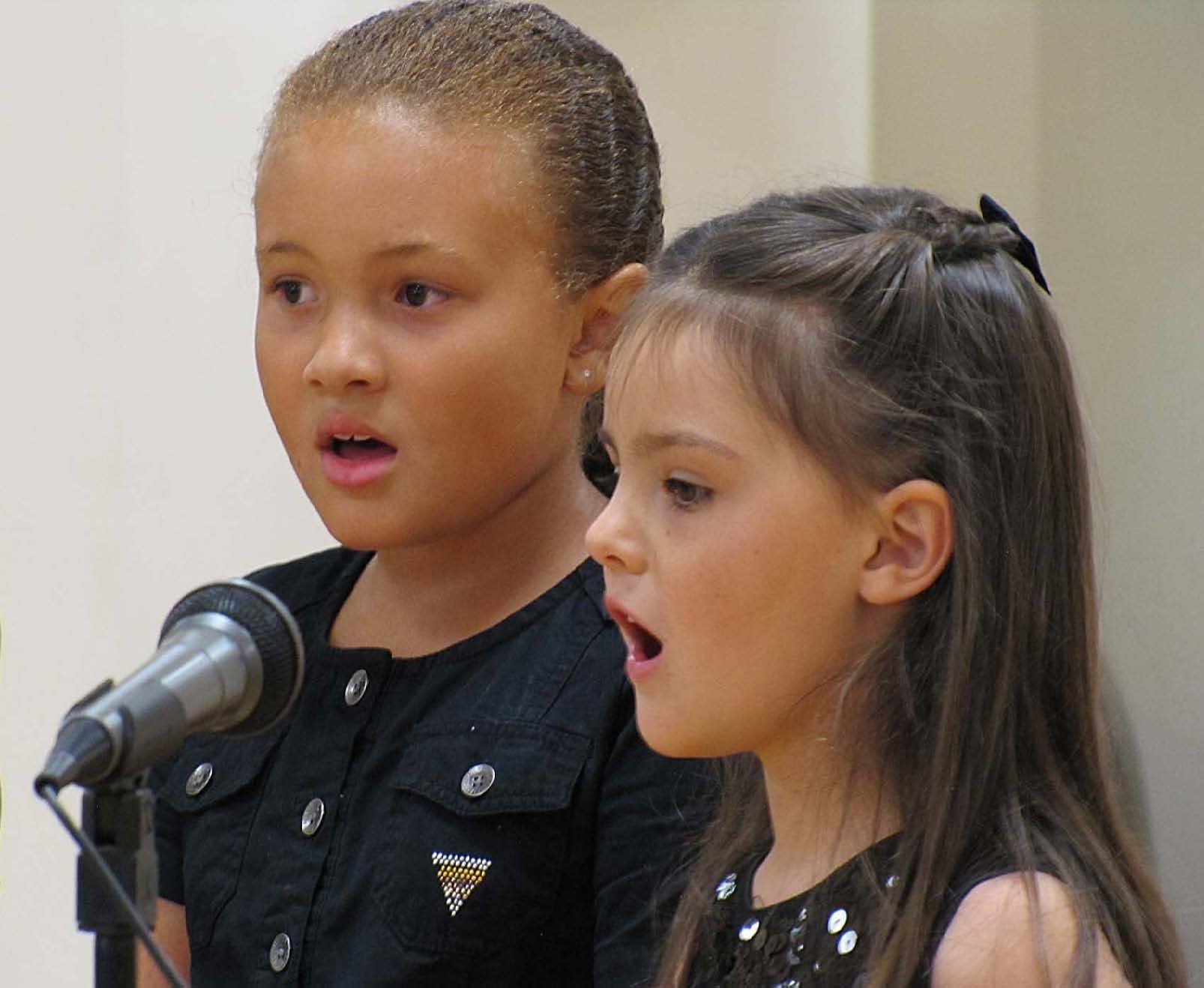 Given the chance, most kids love to sing and lots of L.A. programs will help them tune in

As Artistic Director Misha Shtangrud plays the piano to start a rehearsal for MUSYCA Children’s Choir, he sings, “Hello everybody, yes indeed, let’s make music, yes indeed.” His young students joyfully sing along, clearly enjoying the upbeat music and seamlessly transitioning to “Do Re Mi” and “Seasons of Love.”

The kids, ages 7-9, are part of MUSYCA’s Junior Choir, one of several youth vocal ensembles led by Shtangrud and his wife, Anna Krendel, executive director and pianist. Both hold doctorates in music education.

At just age 6, Junior Choir member Arden Reno is already a seasoned performer. “She’s done four performances and is learning to read music,” says her mom, Audra Camacho, adding that her daughter is working on a YouTube variety show video, “The Arden Show.” “She already has a few episodes.”

Most young kids love to sing, whether they’re playing, watching TV or taking a bath. “Music is pure fun and joy,” says Krendel. But somewhere along the way many of us lose the joy of singing or feel self-conscious. “The main reason kids stop singing is it’s not in their lives,”

says Amy Rolniak, a high school choir teacher and music director at San Fernando Valley Youth Chorus. Many schools have limited or cut their music programs and kids don’t view singing as part of their everyday lives. And many parents stop singing to their kids as they get older, says Rolniak. “Singing in our culture is not as prevalent as it is with many other cultures,” she explains. “I really believe that if children keep singing as they get older they would not feel so embarrassed.” 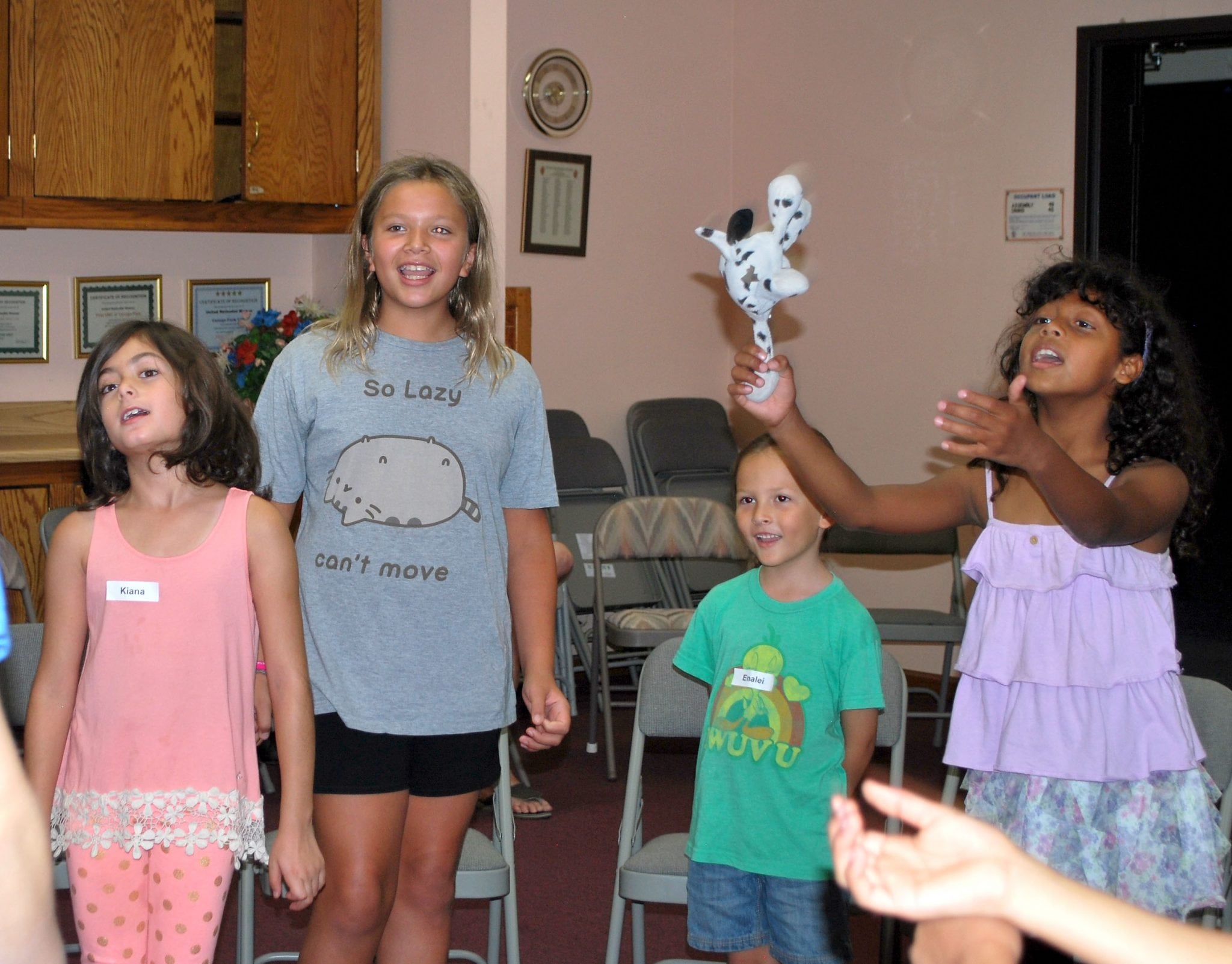 Besides being fun, singing reduces stress, improves posture, keeps us mentally alert and increases self-confidence. “Music makes you human, feel emotion and makes you discover your soul,” says Krendel, whose two daughters sing with MUSYCA. In addition, children who sing tend to excel academically and in their extracurricular activities. “Singing is the ultimate team activity,” says Shtangrud.

Performing with MUSYCA’s Melody group has given Alexa Pinn, 9, confidence, says her grandmother, Lori Pinn. “She was shy when she started but after a few sessions she wanted to participate in everything,” says Pinn.

Another part of the fun of vocal music is the easy access it provides to world cultures. “My kids have sung music from Persia, Brazil, Germany, France, Russia and other cultures,” says Karen Reinhard, the former director of the now unincorporated Altadena Children’s Choir, who now offers private lessons in her home studio.

At MUSYCA, Shtangrud introduces students to a repertoire of music that includes folk songs from all over the world. “It’s culture, history, part of who we are,” says Shtangrud. The content of the songs is also key. “It’s important to find music that resonates with kids. The message should be something wonderful about life,” Shtangrud says. 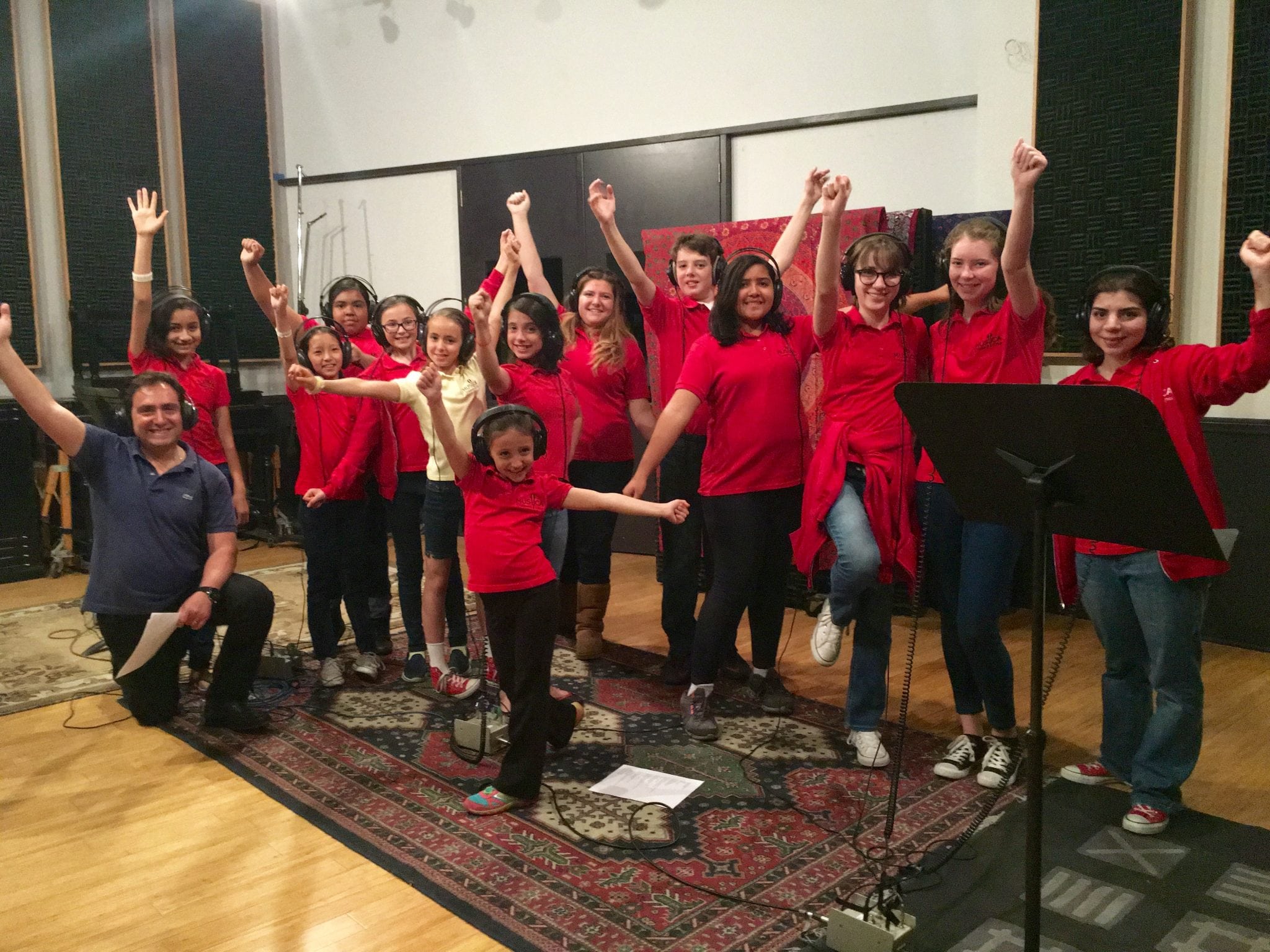 MUSYCA singers have performed in several countries, as well as on TV. PHOTO COURTESY MUSYCA

While your child may not be the next Adele, music directors agree that most people can indeed sing. “While a few children have difficulty singing on pitch, the old wives’ tale of some people being tone deaf is just a myth,” says Reinhard. “Caught early, before the age of 5 or so, the problem can be easily changed with one-on-one training.”

Rolniak agrees that singing in tune is a learned activity. “It is a skill, not simply a talent bestowed on a select few,” she says.

Kids benefit most from a children’s chorus where their voices can grow at their own pace, according to Diane Simons, artistic director for the South Bay Children’s Choir. “It is like growing a flower,” she says. “You can water it, feed it, give it the right sunlight and it will become a beautiful flower. Trying to push or pull it at a faster pace will not be good for the plant.”

Parents can encourage their children to sing by singing to them early on, rather than letting them hear all their music via electronics. “Sing, play music, use your voice. Kids should take a music-making class, not just listen to music,” says Shtangrud.

There are many ways to spot a child with natural singing talent. When Karen Murphy O’Brien’s son, 14-year-old Christopher, was about 5, he hummed while building sophisticated LEGO creations. “He would hum all the time, literally humming on perfect pitch,” says Murphy O’Brien, a former music teacher who played piano during both of her pregnancies. “That’s how I knew.”

But it was Christopher’s piano teacher, not his mom, who suggested he audition for the National Children’s Chorus (NCC) in Los Angeles. Christopher was 9 when he auditioned for the NCC, in its early growth phase at the time. “I was a little nervous,” he says. “But once I got there, the artistic director was friendly.” 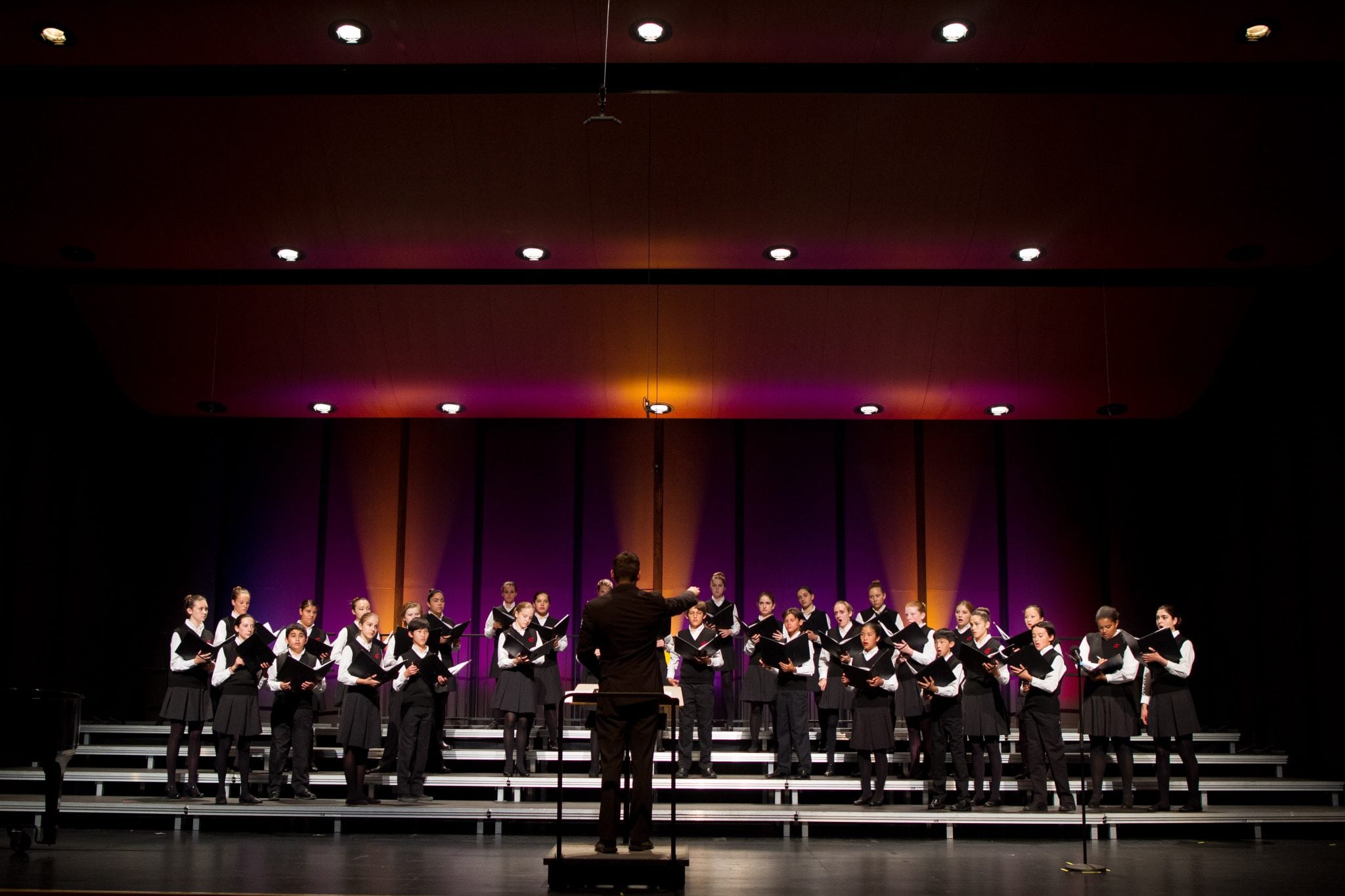 The National Children’s Chorus is among the few youth arts organizations to have its concert series presented in professional music halls. PHOTO COURTESY PRETTY INSTANT

Nasir and Nadia Azghadi believe their daughter Kiana, 8, was destined to sing (her middle name is Melody). “She loves to sing, it’s part of her nature, so we try to be as supportive as we can,” says Nasir. The Azghadis enrolled Kiana at the San Fernando Valley Youth Chorus, where she is an enthusiastic participant. “We see a side of her we haven’t seen before,” says Nadia. “She’s usually shy, but outgoing here.”

There are many quality music programs in the Los Angeles area, from small groups that perform locally to large choruses that travel internationally. Some rehearse in neighborhood churches, others in fine music venues.

Community music programs are great for kids who prefer a low-key music experience. The boutique San Fernando Valley Youth Chorus offers instruction in sight singing, voice control and music theory, and performs in local theaters. “[Our singers] come to have fun and learn about music through singing,” says Rolniak.

Music Director Ann Pittel describes her Westside Children’s Chorus as an intimate group similar to a glee club, with kids wearing matching T-shirts when they perform at senior residences, farmers markets, hotels and other local venues. Pittel instills camaraderie by organizing social events for the kids, including a family barbecue, music-related field trips and a sleepover at the Cornerstone Music Conservatory, where rehearsals take place. The group’s stuffed-animal mascot, an owl named Dominique, makes the rounds of various singers’ homes. “I try to customize the program to the group, rather than vice versa. We do things to bond together,” says Pittel.

Students who take private lessons with Reinhard participate in monthly “master classes” in which they sing for each other and offer constructive criticism and moral support. Three recitals a year help prepare students for their annual Certificate of Merit exams. 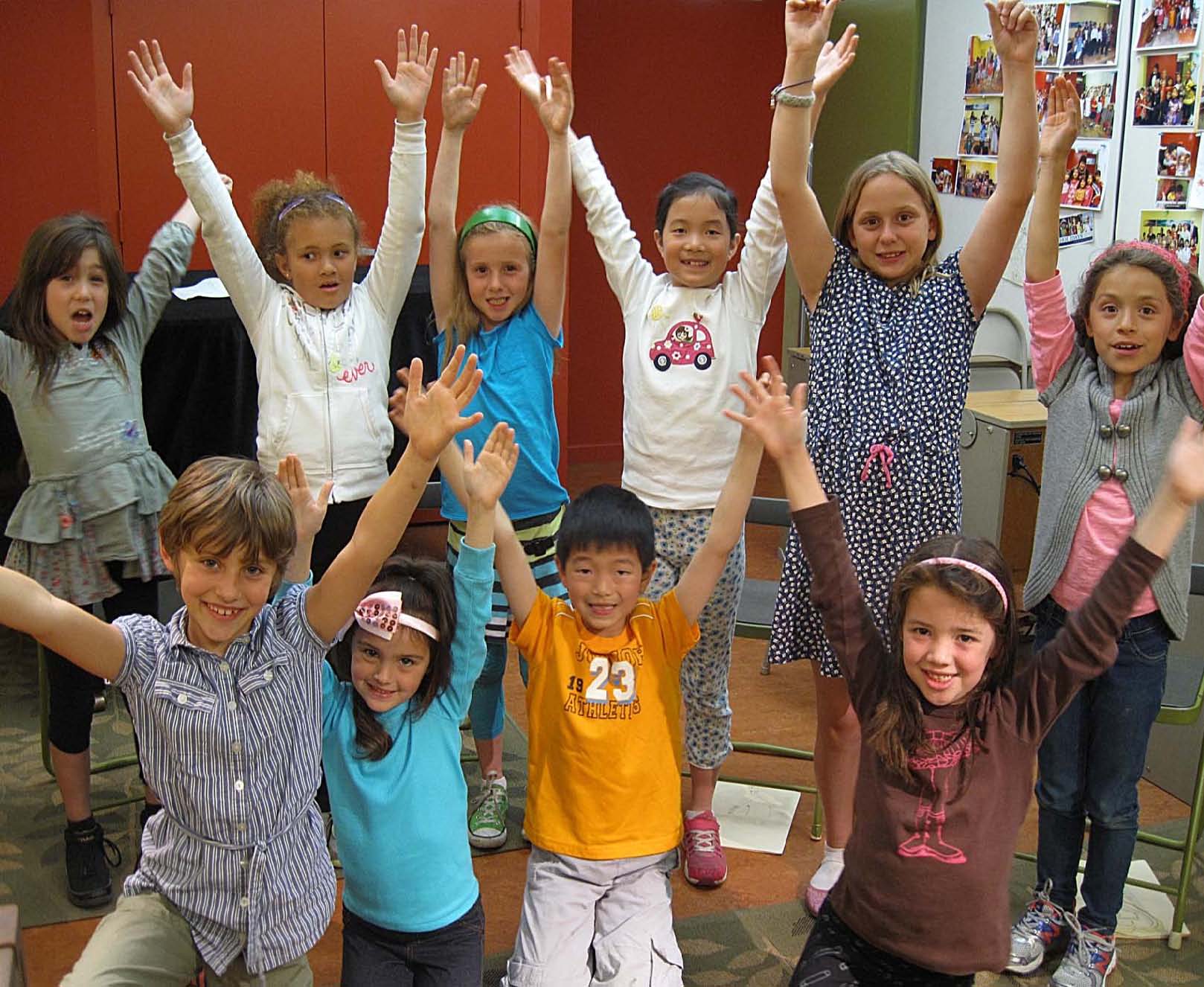 Travel adds another level of enrichment. “For many kids, it’s their first time dealing with passports, currency and singing with other choirs,” says Simons, whose South Bay Children’s Choir will be performing at the Canterbury Cathedral in England this year.

MUSYCA’s students have performed in France, Austria and the Czech Republic, recorded in studios with international artists and appeared on TV. “How many kids can say they performed at the Nickelodeon Kids’ Choice Awards?” asks Krendel.

Also taking its show on the road is the National Children’s Chorus, among the few youth arts organizations to have its concert series presented in professional music halls. The program trains students in the Kodály Method of sight singing. “It’s a technique to turn their inherent understanding of music to written, so music becomes fluid in their minds,” says Executive Director Cristina Demiany. The program also offers a unique college-level conducting class to students ages 10 and older. By age 15, the young conductors are standing in front of an audience of 2,000, says Demiany, whose students rehearse at the UCLA School of Music.

Traveling internationally is a major component of NCC, which has performed with China’s Galaxy Children’s Chorus. “My experience performing in China was truly amazing,” says NCC member Christopher O’Brien. “It’s almost unreal to fathom that I had the chance to perform along the Great Wall of China and within the ancient Xi’an city walls. I’m so grateful to the NCC for making this experience of a lifetime possible.” 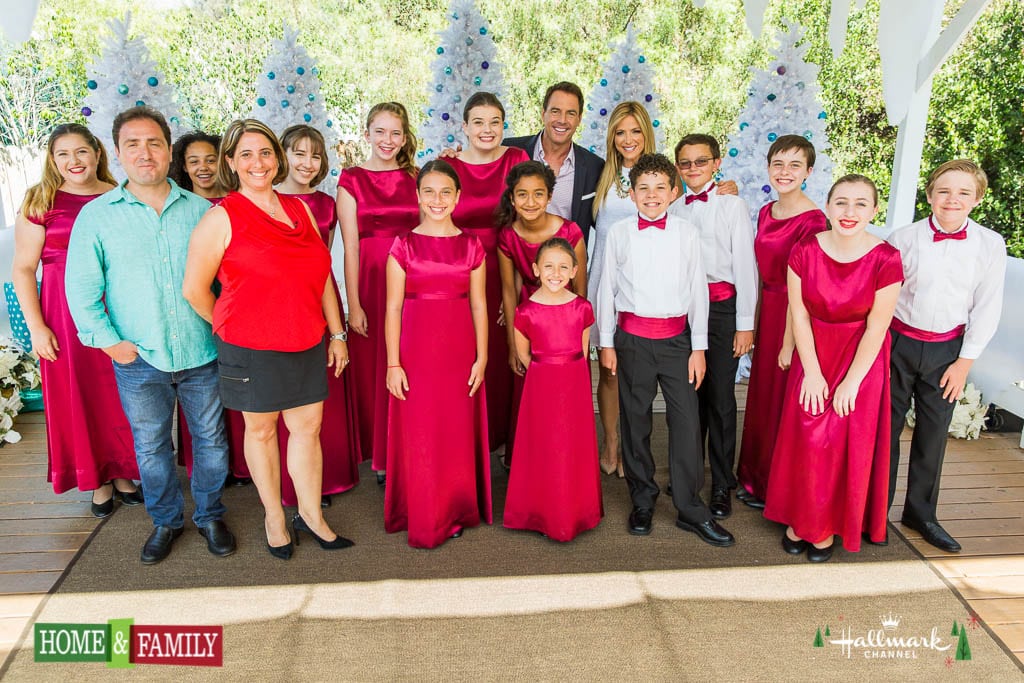 Want to get your child in on the action? The first step is generally an audition, so the program director can hear your child’s vocal range. “The best way to prepare them at a young age is to tell them they’re going to something called a chorus where people sing together,” says Demiany. “They have to listen to everything and do the best they can. We try to make the audition a low-stress experience. We are there to encourage whatever natural musical gifts they have and bring it out.”

Pittel’s audition-prep tips include choosing a familiar song, making sure your child avoids dairy products (which can clog the voice) and gets a good night’s rest the night before, and teaching them to make good eye contact during the audition itself.

While singing in a vocal ensemble won’t necessarily lead to a career in music, the experience tends to stay with a child. “It really becomes a part of their lives and they miss it when it’s gone,” says Rolniak.

But for some, like Shtangrud, years of singing lessons strike a chord. As a child he sang with the Big Children’s Choir of Russian State Radio & Television, and now he helps hundreds of children find their voices.

Here’s a sampling of singing programs in the L.A. area. Lesson rates vary from about $30 to $160 a month.

Mimi Slawoff is a local freelance writer, mother of three, and frequent contributor to L.A. Parent.