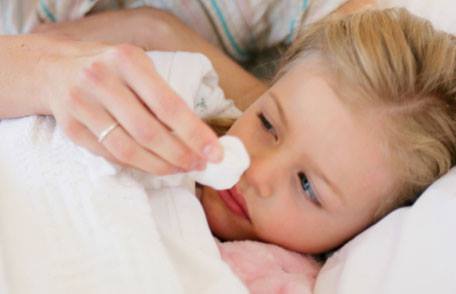 Cold and flu season is upon us, and that means it’s time to invest in a good thermometer to help protect your children’s health. That’s the advice of pediatrician Tanya Altmann, M.D., Assistant Clinical Professor at Mattel Children’s Hospital UCLA.

Tracking fever can help you tell whether your child has a cold (more common) or the flu (potentially more serious). Colds typically involve mainly what Altmann calls “head symptoms” such as stuffy or runny nose, cough and mild fever. Kids with flu, on the other hand, are just much sicker. “With the flu, you’re definitely going to have a high fever and a cough,” Altmann says, but also pretty severe body aches. As of Jan. 9, the L.A. County Department of Public health was reporting steadily increasing flu activity, and seven total deaths for the season.

Your thermometer (Altmann is a fan of a no-touch forehead thermometer made by Braun) will also tell you when your child is most contagious. “If they have a fever, you really want to stay at home,” Altmann says. Except for a visit to the pediatrician. Go within 48 hours of the onset of fever, and your doctor can prescribe a medication called Tamiflu, which could mean milder symptoms and a shorter illness.

Also be on the lookout for fever that goes away for a few days, but then returns. This could be a sign of a secondary infection, such as pneumonia, which could be life-threatening.

Altmann says there could be quite a bit of flu around this year, because the H3N2 flu strain mutated and this year’s injectable flu vaccine isn’t a good match. But she stresses that the vaccine is still worth getting. “The kids that I’m seeing who get the flu after getting the flu vaccine aren’t getting as sick,” Altmann says.

Another disappointment with this year’s vaccine is that the flu mist version isn’t protecting as well against H1N1, a strain that caused a well-publicized pandemic in 2009. However, Altmann says doctors aren’t seeing much H1N1 this season.

There’s still time to get the shot or the mist (Altmann says either is fine), as the flu could be with us until March. Learn more about flu.