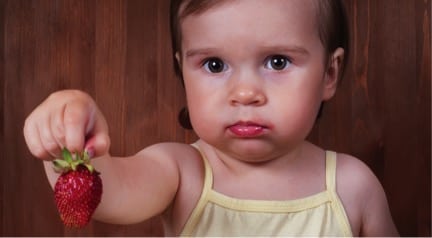 If your child gets a little gassy after a glass of milk, or a mild rash after eating strawberries, does she have a food allergy? Some primary-care doctors might not know how best to figure that out, according to a report published this summer by the American Academy of Pediatrics.

Danica Schulte, M.D., who specializes in pediatric allergy and immunology at Cedars-Sinai, says people often confuse food allergy with food sensitivity – and symptoms can be similar. The difference is that, with a food allergy, they could escalate into a life-threatening reaction.

If your child has difficulty with a particular food, Schulte recommends recording:

Write this information down or take pictures of where you were eating, the food label, what was on the plate and your child’s rash or reaction. Do not make assumptions about what your child is reacting to, just bring the information to the doctor. “I had somebody convinced it was the food, and it really was the neighbor’s dog,” Schulte says.

Schulte likes to use a skin test as her first line of testing for food allergies, and uses a little plastic comb, not needles. “I have the kids touch it so they won’t worry. In 15 minutes, we have an answer,” she says. A blood draw is another option, but neither of these tests is perfect. Both can yield false positives.

That’s why Schulte’s next step is often to conduct oral challenges to narrow the result. A blood or skin test might come back showing allergic antibodies to milk and eggs, but a food challenge might show that the child is fine with eggs. This can keep the family from restricting the child’s diet unnecessarily. Schulte also looks at what the child has been eating. “If you’re eating it and you’re doing fine, you keep eating it,” she says.

It’s worth finding out if your child does have a food allergy rather than just avoiding problematic foods. If your child is younger, doctors might be able to treat the allergy through tolerance therapy – where minute amounts of the food are given under controlled conditions. Being aware of the allergy can also help you guard against a possibly severe reaction.

“Bring it up, ask the questions and don’t be afraid of the answers, because if it’s a true food allergy,” Schulte says, “you need to know.”