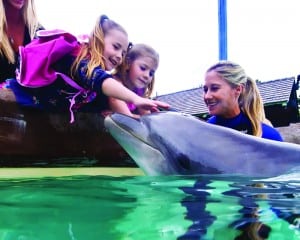 By the time our girls were each around 4 years old, we realized that they were pretty self-sufficient travelers – and that they enjoyed going places. So we bought them their own luggage, showed them how and what to pack, and let them choose things to do on long car drives or plane rides. Over the years, our family vacations became highlights for us, as much because of the new places we explored – Montreal, British Columbia; Vancouver; Orlando, Fla.; New York; New England – as for the time we spent together.

As the girls grew – they’re now teenagers – and their schedules became busier than ours, finding the time to go places became the biggest challenge. If it wasn’t a project at school that required work over the weekend, then it was soccer practice, a birthday party or our work schedules that got in the way. Yet it was clear that we all craved a vacation.

So last month, amidst the chaos of school ending and a variety of other obligations, we decided to get away for a few days. We wanted somewhere local, but with a nice climate and lots to do. Someplace that would allow us some space, yet allow us to re-connect.

In my book, San Diego is one of the three nicest cities in America. It has great weather, culture, good food and something to do for everyone – from parks and touring Navy ships to museums and sports. And we put the city to the test. Our three days were relaxing but never boring.

We used Loews Coronado Bay Resort (www.loewshotels.com) as our home base, and you’ll be hard-pressed to find somewhere better for families. San Diego has a ton of hotels, but we opted for Loews because we love Coronado, and the resort has everything: a kids’ club; a teen lounge designed by Pottery Barn Teen; Ping-Pong; tennis; basketball; and bicycles, wave runners and boats for rent on the resort property. Head five minutes north and you’re in downtown Coronado, which has plenty of restaurants (including really good pizza). 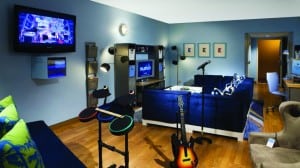 We spent a day at the resort just relaxing and talking to each other. We talked about school, about work, about relationships and about goals. While those conversations aren’t unique to us, the relaxed vacation atmosphere certainly made conversation easy and non-judgmental. From that standpoint alone, the getaway was worth it. 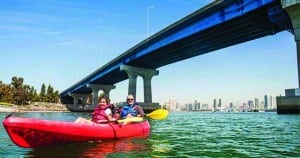 But we also rented a wave runner and tooled around the harbor, and then took a two-hour kayaking tour around the bay, which was very cool. It’s a joint program through Loews and the California State Parks system, and you paddle along the coastline with a state parks guide who shares her knowledge of the ecosystem. The morning of our tour featured typical beautiful San Diego sunshine, and we saw a number of different birds and a few fish as we paddled, and learned how they contribute to the health of the bay.

Most important, though, we did it together. We laughed as we paddled, splashed each other with our oars and forgot about all the things pulling at us back home. Isn’t that what vacation is all about?

Loews hosts an annual dog surfing competition, which I would have loved to see – if only we could have spent a week.

We did spend a day at SeaWorld, which was far more educational than I remembered from our last visit 10 years ago, and overall very impressive. We learned about the diet of a dolphin, the environmental challenges facing whales, and even got to touch a shark. The park is clean and has a pretty good assortment of food – which is key when you travel with kids.

We could have easily spent a week or two in San Diego. We didn’t get to the Zoo this time, but have great memories of it from a previous visit and know that it has only grown and improved. Balboa Park is one of my favorite spots, too, for its serenity and beauty, but we’ll save that for our next visit south. I would also have loved to catch a Padres game at Petco Park, but this trip was about spending time with each other and realizing that vacation memories are priceless because, as kids grow, family getaways sadly become less frequent.

For us, no matter how old our kids are, San Diego will always be a special place – and one that we will return to as soon as we get the chance.