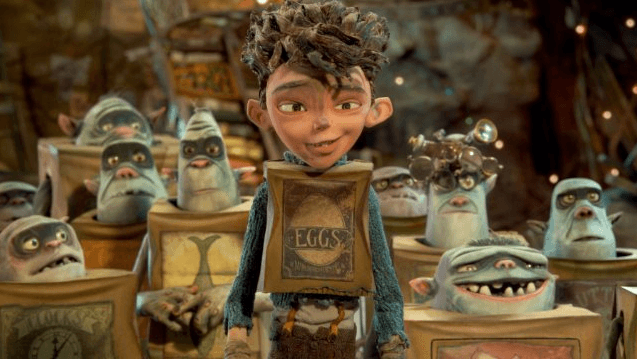 The Boxtrolls, out Sept. 26 from Focus Features, takes us into the sewers of the town of Cheesebridge, home to the mischievous, trash-collecting Boxtrolls. Eggs (teen version voiced by Isaac Hempstead Wright, The Awakening, Game of Thrones) is an orphaned boy who is raised by the Boxtrolls, who believe that one man’s trash is another man’s (Boxtroll’s) treasure.

Cheese and social rankings are priorities for the citizens of Cheesebridge, and their fear of the Boxtrolls is as strong as their love of brie and gouda. Stories of baby-snatching monsters prompt the townspeople to bolt down loose items and lock the doors at curfew.

While everyone locks up for the evening, the villainous Archibald Snatcher (Ben Kingsley) and his hooligans patrol the streets, pursuing the unsuspecting Boxtrolls. Snatcher has bargained with Lord Portley-Rind, leader of the White Hats, to destroy the Boxtrolls in return for one of their illustrious hats and a seat at their table.

One evening, Winnie (Elle Fanning, Maleficent, Young Ones) the daughter of Lord Portley-Rind winds up on the street, after squabbling with her father. Winnie is a bright, rebellious child who is preoccupied with the stories of Boxtrolls. Late at night, she finds herself face-to-face with a Boxtroll and a boy in a box! Archibald discovers her and delivers her back to her dad. Winnie is now set to face an amazing adventure she could never imagine!

Based on the Alan Snow book “Here Be Monsters,” the film’s 3D stop-motion animation is crafted by LAIKA studios, makers of previous animated masterpieces such as the 2012 film Paranorman, and 2009’s Coraline. The studio uses 3D printing to speed up the process of creating the faces of the puppets.

This family film has witty humor as well as the endearing moments. However, Archibald’s character could be unsettling for young children. I worried that the moody look of the film and his hateful attitude would make my 7-year-old daughter uneasy. LAIKA’s first feature film, Coraline, did scare her, but she wound up loving The Boxtrolls without finding the film scary at all. The studio recommends this film for children ages 8 and up. It is rated PG.