Story and Photos By Matt Krantz 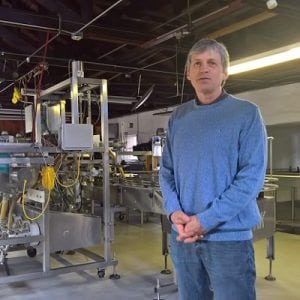 Learn about marmalade and see it made at E. Waldo Ward in Sierra Madre.

Got a golden ticket? You’d need one to enter Willy Wonka’s chocolate factory. But if you want to peek inside some of Southern California’s most interesting factories, usually all you have to do is ask.

Local factories – which make everything from fresh marmalade to olive oil and, yes, chocolate – gladly open their doors to families looking to see the inner workings of their production process. Factory tours give families a glimpse into the business, manufacturing and even history of these companies. And in many cases, kids can taste the results. Sometimes the founders or owners of the companies will make an appearance or give the tours themselves.

“Touring factories is an inspiring experience for children and can also be very educational,” says Karen Axelrod, author of Factory Tour.com and the book, “Watch It Made In the USA.” “Everyone is like a 5-year-old when they go on a factory tour. Their eyes light up.”

Factories on the Farm

Graber Olive House in Ontario – less than 40 miles from L.A. – feels like a step back in time. The second you pull up in the driveway, you’re transported to 1894, when Clifford C. Graber and his brother Charles started the business.

The roughly one-hour tour starts in the grading room, where olives picked from the company’s orchard in the San Joaquin Valley are unloaded and sorted by size. The olives are then soaked in a salt solution in one of 550 concrete olive vats for 21 days. You’ll see every step of the process down to the canned olives being heated in a steam cooker at a curiously precise 242 degrees for 62 minutes.

“Families that visit always find the process to be interesting,” says Rosalie Godfrey, a tour guide at Graber who has worked at the company for 31 seasons. “And the olives are a treat.” 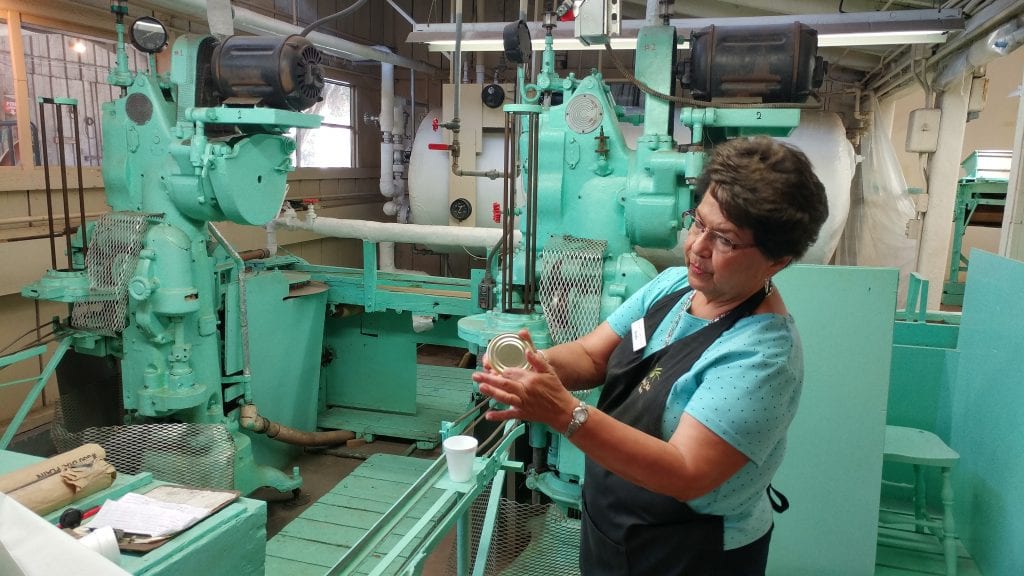 At Graber Olive House in Ontario,
Rosalie Godfrey shows visitors how local olives are canned and made into olive oil.

If you’re looking to try out a factory tour, this is a good one to start with because no advance planning is required unless you’re coming with a large group. Tours are offered Fridays, Saturdays and Sundays from 10 a.m. to 5:30 p.m. Just ask for a tour in the gift shop office. The tours are open to all ages and restrooms are available. There’s no cost for the tour and there’s no restaurant on the premises, but you can buy as many olives as you can eat. Try to go at harvest time, October through December, if you want to see the factory in action.

How do you discover which factories to tour? Follow the breadcrumbs. As you visit more factories, you’ll find some interesting business connections, as it can be a small-business world, after all, in Southern California. Take a close look at the shelves at Graber Olive House’s gift shop, for instance, and you might notice marmalade sold by E. Waldo Ward of Sierra Madre – the perfect place for your next factory adventure.

Like Graber, E. Waldo Ward has been in business a long while, going back to 1891 when Edwin Waldo Ward Sr. first started to grow citrus in this residential town. The two companies have worked together for years.

When you arrive for the E. Waldo Ward tour, you might think you went to the wrong place. The factory looks more like a quaint farmhouse located in a sleepy neighborhood than in an industrial park. Just look for the steps leading up to a yellow building with a sign that reads, “Office.” Let the person at the desk know you’re ready for the tour. Ward’s great-grandson Jeff, who owns the company, still gives many of the tours himself. “Are you ready?” Jeff asked us when we arrived.

Waldo Ward makes everything from barbecue sauce to jelly, but it’s the marmalade it’s best known for. E. Waldo Ward grows a unique type of orange, the Seville orange, known for a unique zesty taste perfect for marmalade. Ward explains the difference between jam and marmalade, a fine distinction you might miss when rushing to fill your cart at the grocery store. Unlike jam, marmalade retains some of the fruit’s skin, giving it a more distinct taste.

Waldo Ward is as much a farm as it is a factory. The orange trees are grown on a small orchard on the property, which is part of the tour. You’ll also see how the fruit is cooked at 200 degrees before being packed into jars, where the tops are screwed on by hand. At the end of the tour, you’re invited to sample a variety of the company’s products.

The historical aspect of E. Waldo Ward makes it a popular factory tour, says Kim Cooper, a tour guide with Esotouric Bus Adventures, which occasionally brings groups to the factory. “Our passengers love the chance to step back in time and see how Southern California’s world-famous orange crop was sugared up and packaged as marmalade served in all the Harvey House restaurants along the transcontinental rail lines,” she says. “The traditional factory equipment, still in use by this fourth-generation family business, tells a fascinating story made all the sweeter because the tour ends in the gift shop. Who could resist taking a little piece of California history home to share with friends?” 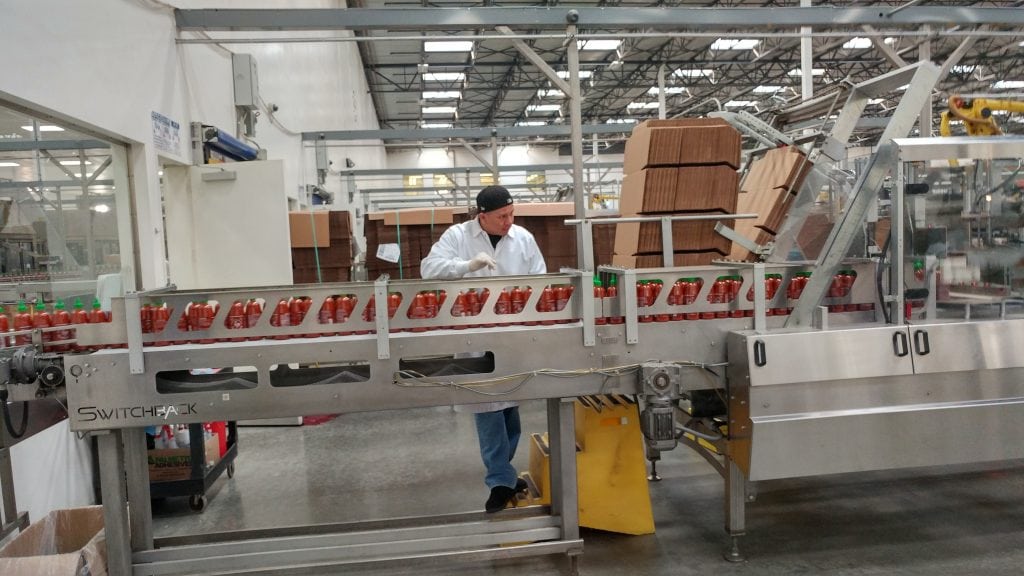 David Tran, founder of Huy Fong Foods in Irwindale, gives visitors the chance to see the company’s iconic bottles of sriracha sauce made and filled.

The hour-long tour is free, but you’ll have a tough time not buying some of the company’s products when it’s over. The tour is perfect for kids of all ages since it moves pretty constantly and there’s even an outdoor portion. Restrooms are available. Tours are usually conducted on weekends, but it’s best to call ahead and make sure.

This Tour is Red Hot

While E. Waldo Ward is a farm with a factory, it’s all high tech at Huy Fong Foods. That’s the maker of the iconic bottles of red sriracha hot sauce emblazoned with a rooster logo common in so many SoCal restaurants. It turns out you can tour the company’s massive factory in Irwindale, watch hundreds of bottles whiz by and get flash-filled with chili sauce.

The factory is so large – more than 650,000 square feet – that visitors are transported to the various stages of production in golf carts. Not only does the company sort and process the red chilies it grows here, it mixes in the ingredients and makes the iconic bottle as well. The tours are given several times a day.

“Kids get amazed with our blow molding machine, which makes our bottles from a small plastic preform to a bottle,” says Daisy Acuna, one of the company’s tour guides. “The parents enjoy watching the packaging area. It surprises them how automated we have become.”

The company opened its factory to the public in 2014, around the time the City of Irwindale sued it. The lawsuit alleged some residents complained the factory was a public nuisance due to its spicy scent. Touring the factory for themselves, though, visitors found a high-tech production facility – not some kind of eye-watering experience. The city dropped the lawsuit in mid-2014, and the tours remain a way for families to see what’s inside. The tour allows “people to see for themselves how our sauce is truly made and there is ‘no tear gas made here,’” Acuna says.

It’s also an American success story. Founder David Tran, who had tinkered with chili recipes in his native Vietnam, headed to the U.S. in 1979 on a Taiwanese freighter named Huey Fong. It was such an important moment in his life that he named his company after it. “Many [visitors] are impressed learning that David Tran is very involved in his company, and the fact that he has never changed the price on his product is very amazing to them,” says tour guide Andrea Castillo. You’ll likely see Tran in the factory – and he’ll gladly stop to talk to visitors on the tour and take photos.

You need to schedule a tour ahead of time, but they are free and there are no age restrictions. Food isn’t available, but you will likely get to choose a bottle of one of the company’s sauces at the end. Restrooms are available. “The families that come by are usually big fans of sriracha and very eager to learn how the sauce is made,” Castillo says.

Finding out which companies offer tours can be tricky. Some, like Huy Fong Foods, promote them on their websites, but with others, you have to ask. That’s the case with Beverly Hills chocolatier Edelweiss Chocolates. It’s really a retail store on Canon Drive, and the entrance looks like any other candy shop with rows of truffles and bars. 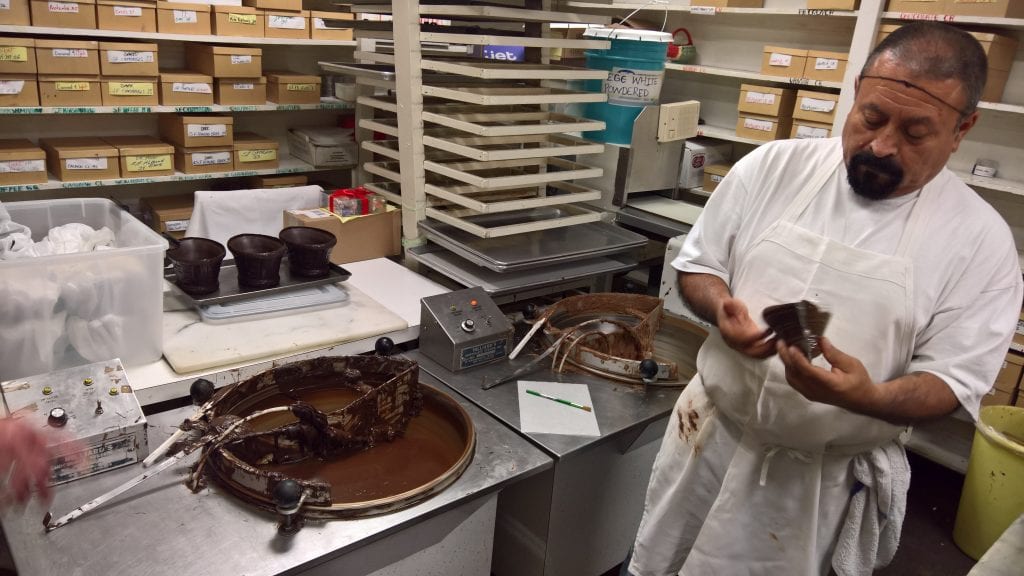 Edelweiss Chocolates is a chocolate shop in Beverly Hills, but it gives behind-the-scenes tours so visitors can see how its wares are made.

But just ask, and the clerk will take you to the back of the store and show you how the chocolate is made. There are vats for melting and shaping chocolates in the company’s signature shapes. You’ll see the assembly line that, legend has it, inspired the “I Love Lucy” television episode where Lucy and her pal Ethel, posing as factory workers, can’t keep up with the increasingly speedy line and try to hide the evidence by stuffing their mouths full of chocolates. Pay close attention and you’ll see a portrait of Lucille Ball on the wall near the machine.

You don’t need to book this tour, but it’s a good idea to call ahead to make sure there’s someone available to take you to the back. The tour is free, but restrooms are not available in the store.

Even if a tour doesn’t require reservations, it’s a good idea to call ahead. Sometimes tours are put on hold for business reasons. Chocolatier ChocXO’s factory tours in Irvine were so popular they filled up months in advance. But during this past summer, the company closed the factory and moved its entire operation to a larger facility in Canada. Robinson Helicopter offered tours of its factory in Torrance for years – allowing visitors to see the manufacture of its choppers. But since the company is doing construction in its facility, at least as of the summer, tours have been suspended. Similarly, Amazon.com has temporarily halted tours of its San Bernardi.no distribution facility, which allowed visitors to see how the giant online retailer packs and ships the items ordered.

Finding tours takes some “good old-fashioned research,” Axelrod says. FactoryTour.com and FactoryTourist.com keep a list to get you started, and you’ll be surprised at how many Southern California companies would be happy to show you their factories. They’re just waiting for you to ask. No golden ticket required.

Matt Krantz is an L.A.-based writer whose work has appeared in USA Today and L.A. Weekly.

Local Tours You Can Take