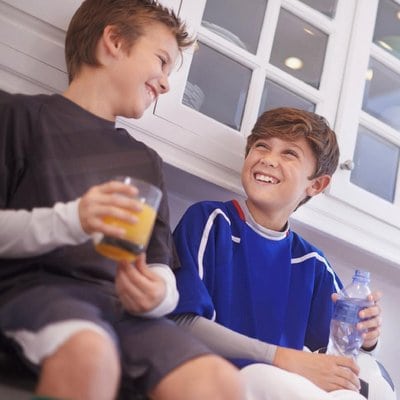 When Alan Nager, MD, Director of Emergency Medicine and Transport at Children’s Hospital Los Angeles, commutes to work, he passes at least eight Starbucks and various other purveyors of caffeine along the way. “In summer, half the people there are adolescents,” he says.

Nager, like many experts, says that drinks with caffeine, energy drinks, alcohol, sodas and drinks with lots of sugar in them aren’t great for kids. They can actually make the body lose water rather than keeping kids hydrated. But Nager doesn’t advocate cutting up your child’s Starbucks card either. “We’re never going to stop adolescents from drinking coffee drinks,” he says, advocating moderation instead. “Try to educate. If your only hydrating fluids are caffeine and soda, that’s not a good thing.”

Milk, water, low-sugar juices and mild sports drinks – “where they taste sweet, but are not gaggingly sweet” – are better drinks for kids, and Nager encourages a balance of these and plain water. “Somewhere in the middle is probably best for kids,” he says. “It’s not as though water is the only source of fluid.” And an occasional Frappuccino or Coke is OK, too.

As for when and how much to drink, parents should teach kids to recognize their bodies’ cues that it’s time to hydrate:

“Parents’ duty is to teach kids about their personal health,” Nager says. Parents of younger kids should pay attention to dehydration signs such as lack of tears when the child is crying, or unexplained sluggish and cranky behavior.

“If your child is not having these symptoms related to dehydration, then they are doing well,” Nager says.

Nager says that the focus on boosting adults’ water consumption in recent years (something he says never really proved beneficial) found its way to children, and that several studies over the last six or seven years have attempted to demonstrate that kids don’t drink enough. Nager, whose area of research is dehydration, says many of these studies used unreliable methods of measuring kids’ water intake, such as asking 10-year-olds to remember how many glasses of water they drank.

Still, he says that hydration is important, and that drinking enough can even help keep kids more alert in school. So make sure your children have access to water on campus and at home, keep an eye on their intake of coffee drinks and sodas, and remind them to follow their bodies’ cues.

“Thirst,” Nager says, “is a pretty powerful indicator that your body needs fluid.”