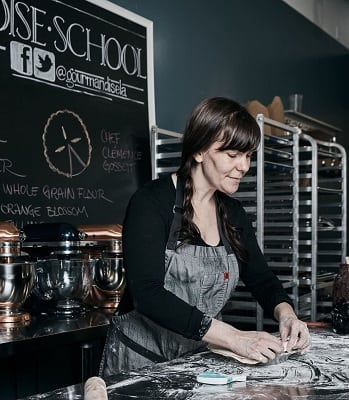 Clemence Gossett is the mom of three and co-owner of The Gourmandise School of Sweets and Savories in Santa Monica. PHOTO BY SHAYAN ASGHARNIA

When Clemence Gossett was a little girl, she made cream puffs with the help of Jacque Pepin’s classic cookbook “La Technique,” a gift from her parents. Today, she’s co-owner of The Gourmandise School of Sweets and Savories (thegourmandiseschool.com) at Santa Monica Place, and mom of three kids who love to cook.

“My oldest is in college and he’s making doughnuts and apple fritters for his dorm mates,” says Gossett. “And my daughter likes to cook. And I have a little guy who’s 7 who likes to get his hands on pasta dough.”

Gossett started her cooking career with a dessert company and soon was teaching favorite recipes on the side. “I loved watching people’s reactions when they made something that felt on paper like it was very complicated,” she says, explaining that the trick is to break the dish into easy-to-manage tasks. “The first thing that you hear out of people’s mouths at the end of almost every cooking class is, ‘My gosh, that was so much easier than I thought it would be.’”

Her goals are to teach people to be intuitive cooks rather than recipe followers, to get people to buy ingredients rather than pre-packaged foods and to get the whole family into the kitchen together. “Cooking should feel like a family affair, so that everybody has a task in it and everybody’s responsible for part of the meal – whether it’s cleaning up or just simply washing lettuce,” she says.

She wants parents to let kids be involved and try things they might not otherwise. “It’s not really about the end result. It’s about the journey when you are cooking with your kids,” she says. “Don’t look for perfection. Enjoy the process.”

One healthy hack for you and your family to enjoy is Gossett’s substitute for canned beans: Put three parts water to one part dried beans in a large, oven-safe pot. Add thyme, rosemary or other aromatics, cover and bring the pot to boil on the stove. Move to a 200-degree oven and cook about 90 minutes for smaller beans or two hours for broad beans. Drain and refrigerate.

For this recipe, though, you can use dried beans – no need to pre-cook or soak them.

There are a few things Gossett says make this chili extra special:

True to the teacher she is, Gossett doesn’t want to give a lot of specific cook times for the steps in the recipe. She wants cooks to pay attention to how the ingredients look, feel, smell and taste. So, cook the onions just until they become translucent and the assembled chili until the sweet potatoes and beans are completely tender.

One final tip for tasting, which comes from Gourmandise instructor Chef Carol Cotner Thompson: When you’re tasting something you are preparing, if it doesn’t taste quite right, don’t add something different to it. Add more of what is already there.

And if you want to sharpen your cooking skills (and maybe your children’s), check out the wealth of exciting options at The Gourmandise School. 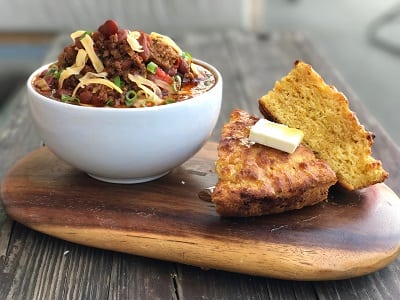 Heat the oil on moderate heat in the largest pot you’ve got. Toss in your onions and sweat them until they are translucent (don’t brown them). Add the bell pepper, garlic cloves and corn. (If not in season, it’s best to use frozen corn or leave it out altogether.) Toss every so often until you get a little color on the corn.

Add the remaining ingredients and cover. Cook over medium-low heat until the beans are cooked and the sweet potatoes are tender to a fork (about 1 to 1.5 hours).

Alternately, toss all the ingredients into a slow cooker and cook at moderate heat for seven to eight hours, until the sweet potatoes are tender.

While the chili is still in the pot, mash about a quarter of the sweet potatoes. Taste and adjust seasoning.