Couples who have children with special needs have to be flexible in their dreams, and care for their relationships, too. 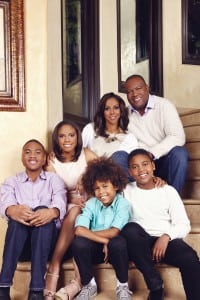 Holly Robinson Peete and Rodney Peete, at top, have gained great insight about life and marriage through parenting RJ, at left, his twin sister Ryan, [other child] and [other child].
PHOTO BY RENA DURHAM

As Rodney Peete and Holly Robinson Peete chat about their day-to-day family life – homework, after-school activities, teen drama – their manner is warm and casual. They share an easygoing rapport and sense of humor.

As talk turns to their son, RJ, I get the sense that this famous couple, a former NFL quarterback and talented actress, have gained great insight about life and marriage through lessons learned from raising their four children, including RJ, their first-born son, who has autism. The past 15 years of parenthood have taught them that life is an improvisation.

They talk with the keen insight of parents of a son with special needs, describing the challenges that they have faced as a couple trying to meet those needs without losing themselves in the process. They speak candidly about how close they came to separating. “Autism is definitely stressful for parents,” says Holly. “There were many rough patches.”

For Holly and Rodney, the rough patches mainly stemmed from the different ways in which each processed news of this disorder. When RJ was diagnosed in 2000 at age 3, Rodney initially found himself simply wanting to escape, while Holly faced it head-on. She read books and articles, talked to experts and other parents, and began a series of therapy sessions for RJ.

“I was steeped in denial and my wife was ready to fight,” says Rodney. “We were not aligned. It took me a long time to accept autism – time that I should have been using focusing on RJ’s needs.”

Caring for RJ’s twin sister, Ryan, getting the correct diagnosis for RJ and then beginning the extensive course of recommended therapy became an around-the-clock endurance test for the young couple. There were sleepless nights wondering about the future, and days filled with countless appointments with doctors and therapists. By dinner time, Holly and Rodney often found themselves simply going through the motions of the night’s routine, unaware of the distance growing between them.

Holly and Rodney’s experience is not uncommon among couples with children with special needs. “There is definitely an increased level of chronic stress among these couples,” says Wendy Hill Williams, a marriage and family therapist in Northridge who is working on her doctoral dissertation on the effects of autism on couples, and is mom to a 21-year-old son on the spectrum.

“The diagnosis brings a sense of relief that finally you have an understanding of what’s going on with your child, but at that moment you start going through the grieving process,” adds Williams. “This is a death of a dream, the death of the hope you had for your child.”

Compounding the situation, couples often go through the different stages of grieving – such as denial, anger, depression and acceptance – at different times, creating discord between them.

Rodney had dreamed of one symbolic father-son ritual that was particularly hard to let go. He wanted to take RJ into the locker room after his games with the Carolina Panthers, just like his dad, Willie Peete, assistant coach at the University of Arizona, started doing when Rodney turned 5. It was a special father-son tradition he wanted to carry on. But, for RJ, the noise and the strangers in the locker room were too overwhelming.

“I watched my teammates bring their sons into the locker room. I had such great memories of being with my dad and all the players as a kid, but this wasn’t something RJ enjoyed,” says Rodney. “I had to tweak my expectations, drop my machismo and my ego and focus on my boy. It was hard.” 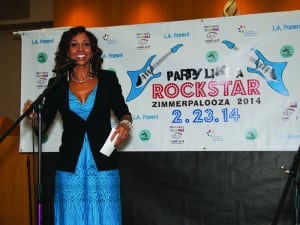 Holly Robinson Peete is active in the autism community, and in other parenting organizations. She presented the first-ever Random Acts of Kindness awards at the Zimmer Children’s Museum in February.
PHOTO BY PHILICIA ENDELMAN

Having a child with special needs means that every milestone, every age, brings new challenges. It’s critical for couples to acknowledge that their child’s needs will impinge on their life financially, emotionally and socially, and that they need to come up with methods for coping with these issues.

“Communication is key,” says Williams. “If you can find a safe environment to talk through these challenges, talk through your feelings of anger, disappointment and grief, you’ll begin to work as a team.”

What brought Rodney and Holly to the brink of separation was they had stopped talking. “We both wanted to help RJ in our own way,” says Rodney. “We each had our own resentments and we stopped listening to each other.”

Rodney’s insistence that he could “coach RJ out of this” finally began to exasperate Holly, who was focused on finding the right therapies for her son. “I said to him, ‘You’re either on board with this or we’re doing this without you,’” says Holly.

Rodney calls that moment a wake-up call for him as a husband and a father. Looking back, he says, “I have learned so much. I wish I could reach out to all the autism dads to let them know that as long as they are in denial, they are losing valuable intervention time. Early intervention is key.”

Their advice to other couples is “talk, talk, and then talk some more.” “Therapy was so helpful for us. Not every couple can afford that, so speak to clergy, a trusted friend, someone objective, but talk to someone,” says Holly. “Stay focused and remember that this journey needs all hands on deck. If you dig in your heels and stay focused on the child’s needs, the outcomes will work in your favor.”

The couple is well known for their advocacy in the autism community and for raising funds and awareness through the HollyRod Foundation. They have also shared their journey through books. Rodney opened up about his fears, heartbreak and eventual hope and acceptance in his 2010 book, “Not My Boy,” where he tenderly tells the story of his family’s experience with autism. Holly, a charismatic speaker and a tireless community activist, was awarded the 2011 NAACP Image Award for her children’s book, “My Brother Charlie,” which chronicles a child’s experience with a twin sibling who has autism.

Rodney and Holly are keenly aware of the obstacles ahead and they are thankful to be able to face those as a couple. RJ is now a teenager, facing the same challenges of shifting hormones, spiraling emotions and a growing sense of independence that other 15-year-olds are facing. But his experience is compounded by autism. Together with their twins, RJ and Ryan, Holly and Rodney are working on a third book, focusing on the challenges of autism during the teen years. The book is due out later this year.

“I couldn’t have kept my head together without Rodney,” says Holly. “We had to have a game plan at all times and I needed a partner. I thank God we made it through.”

Tips For Keeping Your Relationship and Family Strong