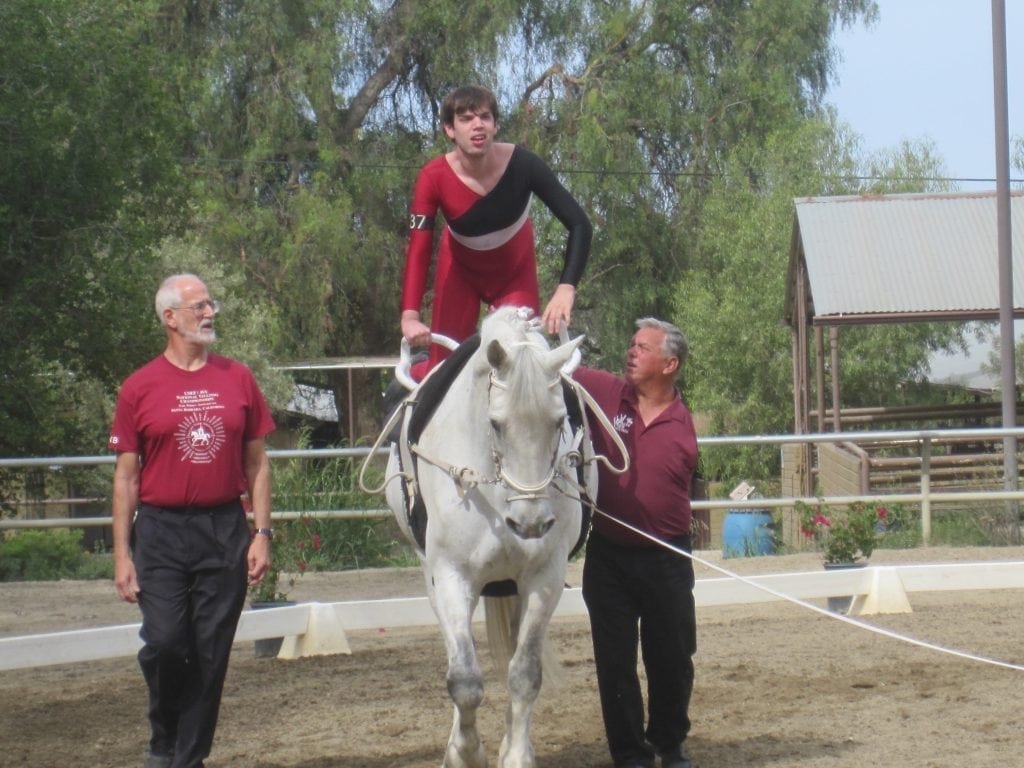 At birth, Steven Rostomian suffered oxygen deficiency , leaving him with physical and mental challenges that would last the rest of his life. “He used to be in a wheelchair, had maybe 20 to 30 seizures a day and a food tube in his stomach,” says his mom, Sarah. Doctors emphatically told the Glendale family that Rostomian would never walk.

Then the family heard about a program that gives children of all abilities the chance to learn skills that could possibly change their lives. At age 9, Rostomian entered Rick and Virginia Hawthorne’s back yard in Lake View Terrace and discovered the strength of his own body, a sense of confidence and a supportive group of fellow students, parents and trainers. The experience helped get Rostomian, now 27, out of his wheelchair.

While the Hawthornes’ back yard features a flowered garden, it’s also home to horse stables, practice barrels and an open field where horses and trainers work with students to learn vaulting – gymnastic maneuvers done on top of a moving horse. Valley View Vaulters, as the program is called, has made the Hawthorne home like a second home for hundreds of students and families over the years.

Valley View Vaulters was founded in 1980 and, Rick explains as he motions to his left side, welcomes students of all abilities. “When I lost my arm to cancer as a youngster, I learned quickly that people wanted you to be ‘different,’” he says with a twinkle in his eye. “They picked the wrong guy, because eight weeks after they took off my arm I was out playing baseball and football. Nothing was going to stop me.”

After graduating from Cal Poly Pomona and working at other horse-related facilities, Rick and Virginia decided to create their own program where students with and without disabilities could learn together. “No one would be turned down as long as we could put them on the horse,” Rick says. Another rule: “Students must have fun.” 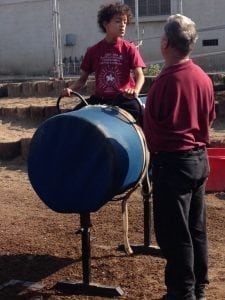 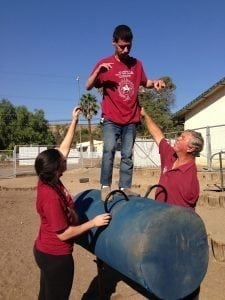 Steven Rostomian practices on a vaulting barrel to warm up, with Lizzy Strauss and Rick Hawthorne assisting.

Through the years, the couple has seen how the sport attracts and empowers students of all ages and abilities; in fact, they contend that vaulters without disabilities learn valuable life lessons practicing alongside their teammates with physical and developmental challenges. “The magic is the horse, the feel of the horse and the belief in the people around you,” says Rick. Classes are kept small, so riders get loads of horse and trainer time.

They must be doing something right. Valley View Vaulters is one of the first mainstream vaulting teams to have completed successfully at the American Vaulting Association’s National Championships. Their teams have placed high in national competitions with vaulters of all abilities and the team has earned three national team championships.

While some students catch the vaulting buzz and train for competition, others enjoy the sport as recreational. It’s all good says Virginia. “Families love to see their child blossom, no matter if they are special needs or able-bodied,” she says. “Many students start very young, and we have a mommy-and-me class for the littlest ones.” 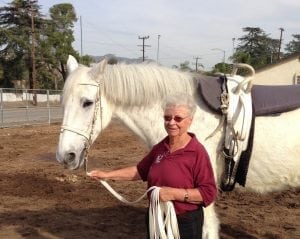 Virginia Hawthorne leads Ben the horse in her “back yard.” 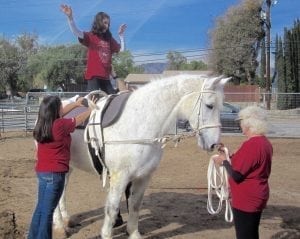 Kaitlin Woolson, who is 15 and has cerebral palsy, was 3 years old when she started vaulting. “We love horses and we were thrilled with this option for Kaitlin,” says her mother, Teresa, recalling that at her first class, Kaitlin was apprehensive and only took pictures of the horses. But that was the only time. “She’s been on the horses ever since.”

Torrance dad Bob Lieberman has been accompanying his 28-year-old son Sam, who suffers from a seizure disorder, here for almost 20 years and also saw almost-immediate results. “The culture here at Valley View Vaulters is very nurturing,” he says. “My first time here, I was blown away. Within half an hour of our first class, here was Sam riding backwards with no hands on a horse. I was in tears.”

Part of what has made the classes so valuable for Sam is the team identity. “He’s made friends around the area and the country,” Lieberman says. “At no time did he ever feel like a second-class part of the team. He’s fully accepted by all his teammates.”

At a recent class, as Sam was waiting his turn on the horse, he suffered a series of seizures. Obviously disappointed, he and his dad waited them out for safety’s sake. Lieberman finally decided that it would be best if Sam had some time on the practice barrel doing his vaulting routine. With ease and determination, Sam mounted the barrel with his dad nearby, encouraging Sam to move through the positions, to challenge his body. Sam responded, lifting and twisting his body with graceful movements, raising his arms and legs, stretching them out and above as if happily hugging the world.