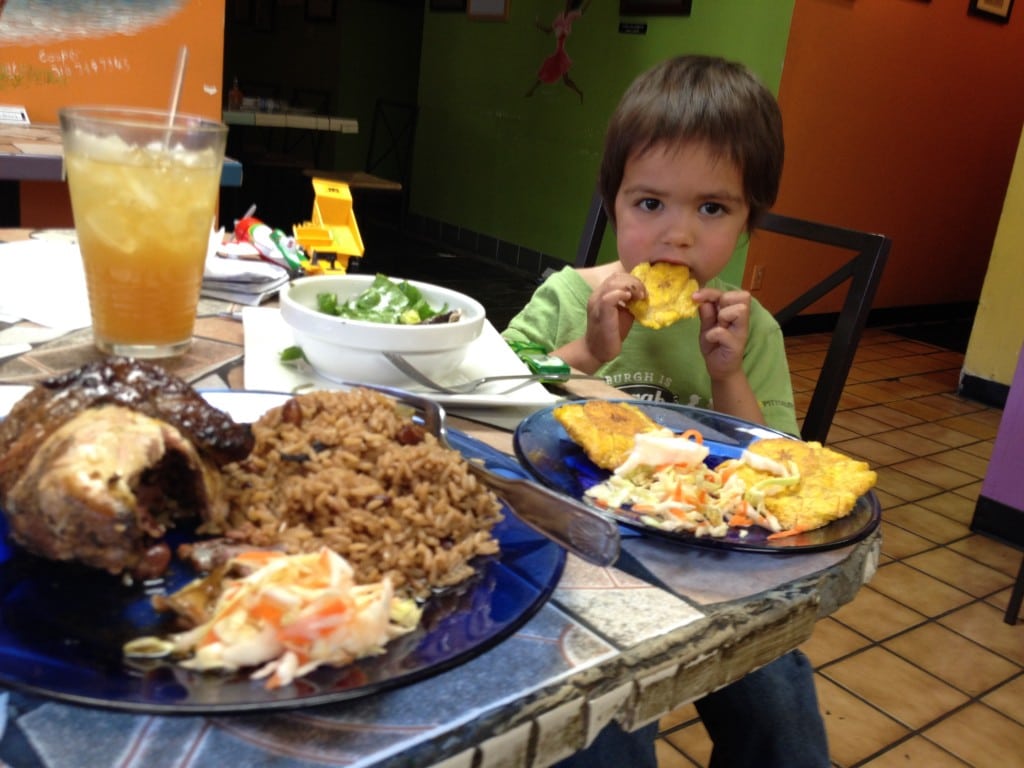 My child, once a baby who gummed anything I put in front of him, has become a quintessential picky toddler. Every suggestion is met with a cheerful, but firm, “No,” and I’ve watched his culinary world narrow into a rotating Lazy Susan of hot dogs, chicken fingers and fish sticks. This is something I swore I would never allow.

Experts say to keep presenting toddlers with new foods, and not to make a big deal out of whether they eat them or not. But do the experts know how long it takes to cook a decent meal? It’s crazy-making to spend time cooking what seems like a sure hit, only to have my son turn up his tiny nose and wander away to dig leftover crackers out of the couch.

This is why we often prefer to eat out. It’s convenient, and it spares us the aggravation of seeing another lovingly prepared dinner go uneaten. And kid-friendly dining doesn’t have to mean bland take-out or unhealthy fast food – especially not in Los Angeles.

I set out to introduce my child to dishes he’d never get in our own house and to eat in places that follow the three rules to kid-friendly dining: casual, speedy and affordable. 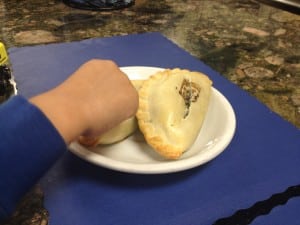 From Burbank to Encino, Ventura Boulevard is a foodie mecca, with top chefs opening gastropubs and farm-to-table restaurants at a dizzying rate. If kid-friendly is your goal, these places are not for you.

Instead, drive north of the boulevard to discover Central and South American strip-mall gems. These ultra-casual restaurants serve kid-friendly staples including El Salvadorian pupusas (tortillas stuffed with cheese and/or meat) and Peruvian-style fried plantains and lomo saltado (a dish that gives French fries a starring role). For a really off-the-beaten-path treat, drive to the northern edge of Van Nuys to Mercado Buenos Aires (7540 Sepulveda Blvd.; 818-786-0522; www.bsasgrill.com), part market, part restaurant and sister to the Northridge-based Buenos Aires Grill. The sit-down tables get jam-packed with families on weekends, but you can stick to the bar and order empanadas with spinach, ham and cheese or beef. The butcher counter offers a huge selection of meats, including chorizo and skirt steak, to bring home for your own Argentine grilling feast. 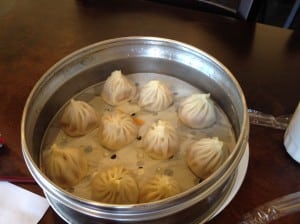 Nothing says Chinese in Los Angeles like the San Gabriel Valley, an area that is home to large groups of Chinese and Taiwanese immigrants and first-generation communities. For many Angelenos, dim sum in Monterey Park is a longstanding weekend tradition. But while dim sum can be a fun group activity, the long wait and staggered ordering from roving carts can be tough on small, hungry kids.

Instead, we searched for a traditional sit-down restaurant that could serve us the best part of dim sum – the dumplings! Luscious Dumplings in San Gabriel was our first choice, but this spot is so popular among locals that there was a 30-minute wait. Instead, we went around the corner to roomy Da Qing Hua (706 W Las Tunas Drive, Ste. B2-B4; 626-293-8098), which serves dumplings galore, along with steamed buns and Chinese pancakes. There’s also a window that looks into the kitchen where you can watch chefs assembling dumplings by hand. Bonus: After our son’s long journey in his car seat, we didn’t want to plop him straight into a high chair. We found lovely little Alhambra Park (500 N. Palm Ave.), a 10-minute drive from the restaurant and a great place to run around and burn off some energy.

Culturally diverse Downtown L.A., Echo Park and Elysian Park have a huge variety of ethnic dining. So it’s no surprise that the city’s only Haitian restaurant, Tigeorges’ Chicken, is tucked on a quiet corner of Glendale Boulevard (307 Glendale Blvd.; 213-353-9994; www.tigeorgeschicken.com). Owner George is often around to chat and will usually suggest the typical Haitian plate: a quarter chicken cooked on an avocado wood, served with rice, beans and fried plantains (prepared sweet or salty). Although Caribbean flavors tend to be on the spicier side, this dish is quite mild, which might appeal to younger palates. Liven it up with a side of George’s house-made pikliz (pickled cabbage slaw). Or, if you really want to go for it, ask for a side of ti malis sauce, made with scotch bonnet peppers. For grownups, the rich Haitian coffee is a must, and kids will love the sweet fresh-squeezed limeade. 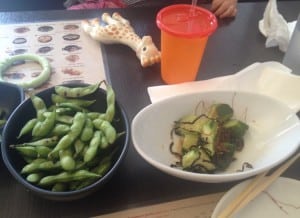 Sawtelle Boulevard in West L.A. is known as Little Osaka, but there’s a huge diversity of Asian restaurants there serving everything from piping-hot Japanese ramen (not necessarily baby friendly) to Korean-style sausages, and fried pork cutlets.

On a busy Saturday afternoon, the lines at some of the smaller spots weren’t appealing, so we veered down the block to Gottsui (2119 Sawtelle Blvd.; 310-478-0521; www.gottsui-usa.com), which has ample space in its covered patio. This place stays true to Sawtelle’s origins by serving Osaka-style okonomiyaki, a sort of cross between a frittata and a pizza. The base is made from a blend of cabbage and dough, topped with any combination of Kobe beef, seafood, pork belly, bonito flakes, and/or egg, along with a savory sauce. Order one to share, along withsides of salted edamame (always fun for little fingers), cucumber marinated in ponzu sauce, and buttered ears of corn. 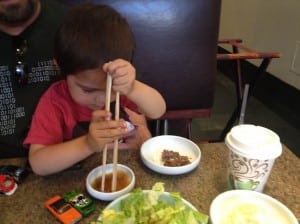 You can’t do ethnic cuisine in Los Angeles without including Korean food. Los Angeles has the largest Korean and Korean-American population in the country, and a bustling Koreatown, but the concept of “Korean food” is not easy to categorize. Some restaurants are known for their braised short ribs, others for noodles, and trendy late-night spots will serve spicy chicken wings paired with soju.

For a family-friendly experience, opt for Korean barbecue. The large, airy outdoor patio at Chosun Galbee (3330 W Olympic Blvd, L.A; 323-734-3330; www.chosungalbee.com) is always a draw. The meal starts with a huge assortment of side dishes, known as banchan, which expose little ones to a variety of flavors and textures. There are crunchy, seasoned mung bean sprouts, spicy kimchee (fermented cabbage), eggy pancakes, cold spinach, even a slightly sweet and creamy potato and apple salad. Then comes the barbecue, where you cook your own meats tableside (just keep an eye on tiny hands near the grill). This particular restaurant serves mostly recognizable cuts such as soy marinated short rib and spicy sliced pork. Others may have more adventurous options including tripe and intestines, so order wisely. 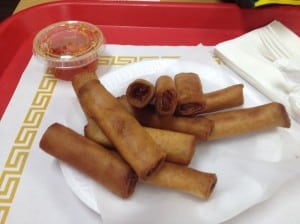 Filipinos are the second-largest Asian population in Los Angeles, and growing. Naturally, that means Filipino restaurants proliferating around the city, especially in enclaves such as Eagle Rock, Panorama City, West Covina and Carson. At least, that’s what I heard. I knew next to nothing about Filipino food, so I chose a place at random—a branch of the Manila Sunset chain in East Hollywood (1016 N Vermont Ave., L.A.; 323-665-1010; www.manilasunset.com). I had been told, “All kids like lumpia.”

I stood at the counter, pointed to the Shanghai lumpia and hoped for the best. Had I been more prepared, I might also have picked out more complete dishes such as skewered barbecue pork and Filipino-style longganisa sausages. But when I brought back a tray of narrow, fried spring rolls, my son was at first intrigued, and then thrilled. These thin, crispy rolls – stuffed with lightly spiced pork and vegetable and served with a sweet-and-sour dip (truly tangy, not the usual cloyingly sweet stuff) – turned out to be the highlight in all of our culinary adventures.

We haven’t left chicken fingers and fish sticks behind for good, but we’re well on our way – both kids and adults – to expanding our culinary horizons. Now if these chefs could just take up residence in my kitchen, we’ll be all set.

Sarika Chawla is an L.A.-based writer and editor and mom to a toddler.