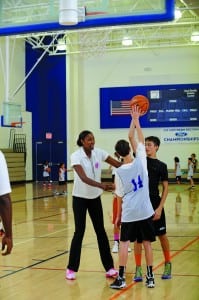 Hannah Martin, 13, doesn’t mind waking up early on Saturday mornings to drive from Los Angeles to Calabasas for a basketball clinic. Like the other boys and girls enrolled in this program, she’s fueled by an extra dose of adrenaline stemming from the opportunity to learn from WNBA legend, Lisa Leslie.

“I’ve learned so much,” says Hannah, who started playing basketball at age 8. “My shooting and offense have really improved so that even my club coach was wondering what happened. I love being here.”

The Lisa Leslie Basketball & Leadership Academy takes place every Saturday morning at the Viewpoint School and is open to boys and girls ages 7-17. Leslie and her husband, Michael Lockwood, run the program themselves, with the help of a few coaches. Kids stretch and warm up together, and then Leslie and Lockwood go to the various training stations set up in the gym to teach the fundamentals –a proper layup, a ball-fake, in and out dribble, and boxing out for a rebound.

“What’s so great about this program is that Lisa takes her time with every single child, showing them what to work on,” says Hannah’s mom, Nancy. 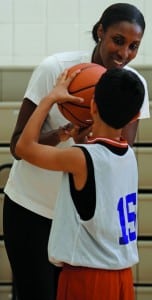 Leslie, a three-time WNBA MVP and the first woman to slam-dunk in the WNBA, runs the academy like a pro training session. But beyond the focus on fundamentals, the academy definitely has the hallmark of the four-time Olympic gold medalist who is known for her character and perseverance. Learning to compete, win and lose with grace is a topic Leslie comes back to often.

“Everything you learn on the court applies to life,” she says. “How you react to being mad or disappointed, these are important life lessons.”

She likes sharing her favorite motivational quotes with the kids and instilling in them the importance of setting goals and building the discipline needed to reach those goals. The game, she tells her students, “is 10 percent physical and 90 percent mental – you have to outthink your opponent.”

Personal character and integrity are so paramount for Leslie that she devotes a portion of her academy twice a month to specifically discussing these topics. She sits on the gym floor with the kids and they chat about such topics as the importance of making a good first impression, eye contact and a firm handshake, sending thank you notes, volunteering and making a difference in your community.

Despite her jam-packed schedule as part owner of the Los Angeles Sparks, sports commentator and analyst, motivational speaker, author, wife and mom, Leslie has only missed a handful of Saturday sessions in the latest year of the academy.

“It’s important for me to give back to kids what I’ve learned,” she says. “Basketball and other sports can be a powerful tool in empowering kids.” 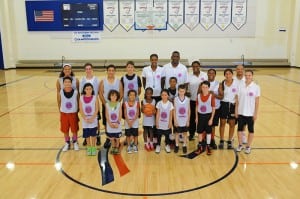 The main goal of the academy, Leslie says, is to have an impact on the kids on a personal level. She takes great satisfaction when she sees a new level of confidence in her students or hears about one of the kids taking on a leadership role at school.

During one recent session, she started the conversation by asking the kids, “If you walk into a room and don’t say hello to the people there, does that leave a good impression?” The discussion about the lasting impact of first impressions was followed by each child standing up, looking Leslie in the eye, firmly shaking her hand and introducing themselves by their first and last name.

Leslie credits her mom for instilling in her an unrelenting drive and a can-do attitude that fueled her success despite many challenges. She attended Morningside High School in Inglewood, where she led her high school basketball team to two state championships. While earning her degree at USC, she finished as the all-time Pac-10 leader in points, rebounds and blocked shots. She launched her modeling career after college and dominated the WNBA while playing for the Sparks.

But despite international fame, Leslie has never lost sight of her old-fashioned values of respect, hard work, poise and industriousness. She defines success as working hard to reach your potential and is eager to teach and inspire kids to reach their highest potential.

She says her greatest joy comes from being a mom. “I love the opportunity to be a mom. That’s dearest to my heart,” says Leslie, who has a 6-year-old daughter, a 3-year-old son and two older stepdaughters. Sports play a big role in the family, with the kids participating in tennis, gymnastics and swimming.

“I love reading with them, going to the park, just being together,” she says. “If you give kids the values and the foundation they need, it’s amazing what they can accomplish.”