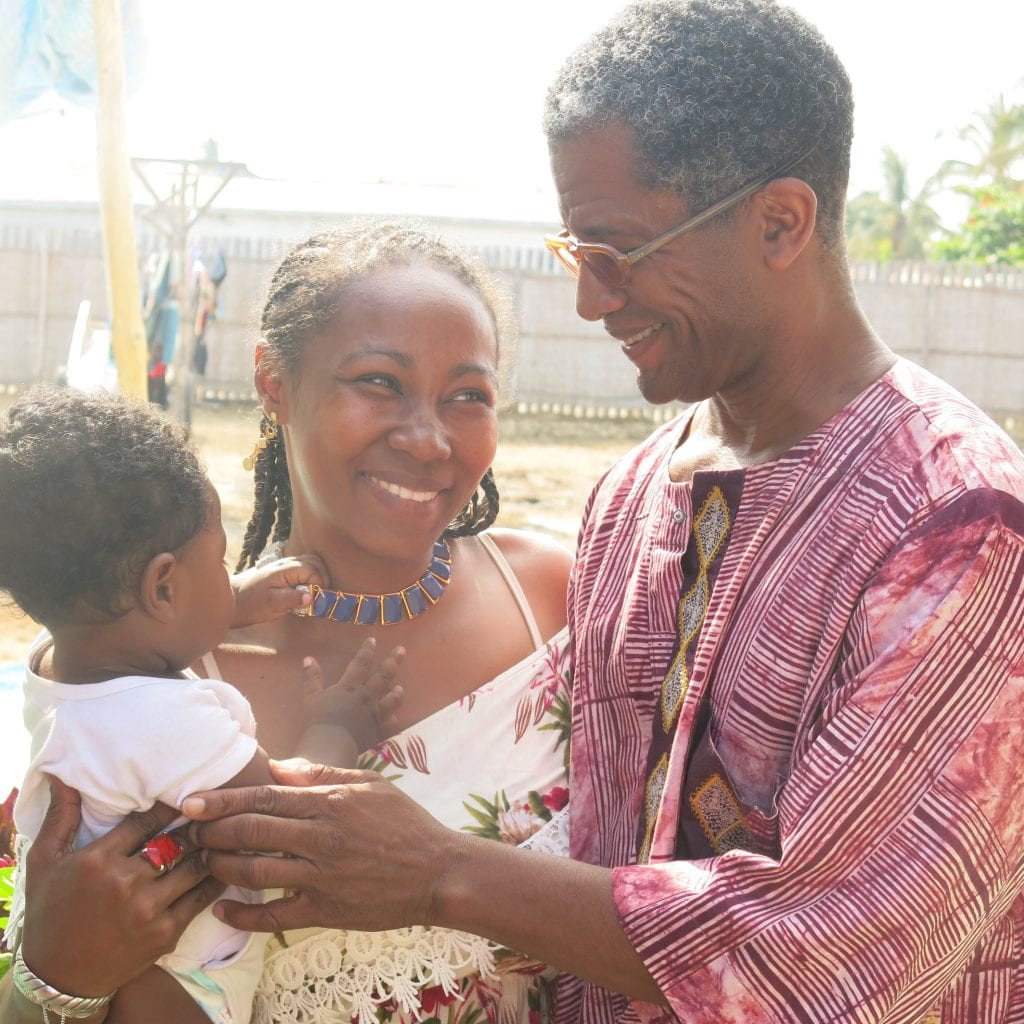 Behold, the only thing greater than yourself.

That’s the only line I remember from the original “Roots” miniseries. Kunta Kinte’s father lifted him up to the Gambian sky and with those words declared his son’s horizon to be boundless.

Looking back on it, I suspect those words were more Hollywood scribecraft than west African wisdom. Still I hoped to say something similarly monumental upon meeting my own son. And, as I am both a Hollywood scribe and a man of west African descent, I assumed myself equal to the task.

My son was born in my absence on Madagascar, the same island on which his mother was born. Béatrice Ravaohitanomenjanahary (the Malgache have long names) is her name and we met online a couple of years ago. Which is to say this whole thing began in a way that is not traditional to any culture that is more than a decade or two old.

Our son was conceived during my visit to the island in the summer of 2017. I like to say that he was hoped for, though not planned. Eight months later, I came to learn that medical science has yet to perfect that art of predicting dates of delivery. April 7 is the date they predicted, but Béa’s increasing girth suggested he might arrive several days early.

After fielding several calls from Béa as she rode to the hospital in the back of a taxi, I decided to get out of the prediction business altogether. Then this: I woke up to go to the bathroom in the wee hours of April 10, my birthday. I checked my phone. I found a message from Béa’s sister telling me that she had had an emergency Cesarean and that she and my new son were fine.

In that happy pre-dawn haze, I raised a glass of Champagne (Ployez-Jacquemart Extra Brut Rosé) to him, to Béa, to my mother’s first grandchild and to the gods of Divine Intervention and Coincidence who conspired to bring him to us on my birthday. In October, his sixth month, I prepared to meet him for the first time.

I had given some thought to appropriating the words from “Roots” and using them to introduce my son to his father’s leftist politics and sick sense of humor. While showing him a copy of the hospital bill from his discharge, I’d say, “Behold, the only thing greater than yourself, the cost of healthcare in America.” Problem is, he was born in a country that, despite its bad roads, polluted skies, overpopulation and deforestation, is far more civilized than the United States when it comes to its citizens’ right to decent health care. Had my son arrived naturally via the birth canal, I was told to anticipate a bill of $30 per night plus assorted miscellaneous expenses. Instead, the bill was about $3,000. Any American hospital discharging an uninsured patient with a similar bill would risk charges of fiduciary malpractice.

If my own father said anything monumental to me on our first meeting, I don’t recall it and he never mentioned it. He was absent at my birth, as this fashion of men being present in the delivery room had not come into vogue yet. I suspect my father was off somewhere drinking a Scotch and water with friends, awaiting news of my arrival.

Like my father, I gave my son our name: Lolis. Like my mother, my son’s mother chooses to call him by his middle name: Niriko. It means “what I desire” in Malgache. Who knows if one day, like me, he’ll chose to refer to himself by his first name. When you have your first child after crossing the 50-year-old mark, you tend to be less hung up on the name than you might have been a decade or two earlier. 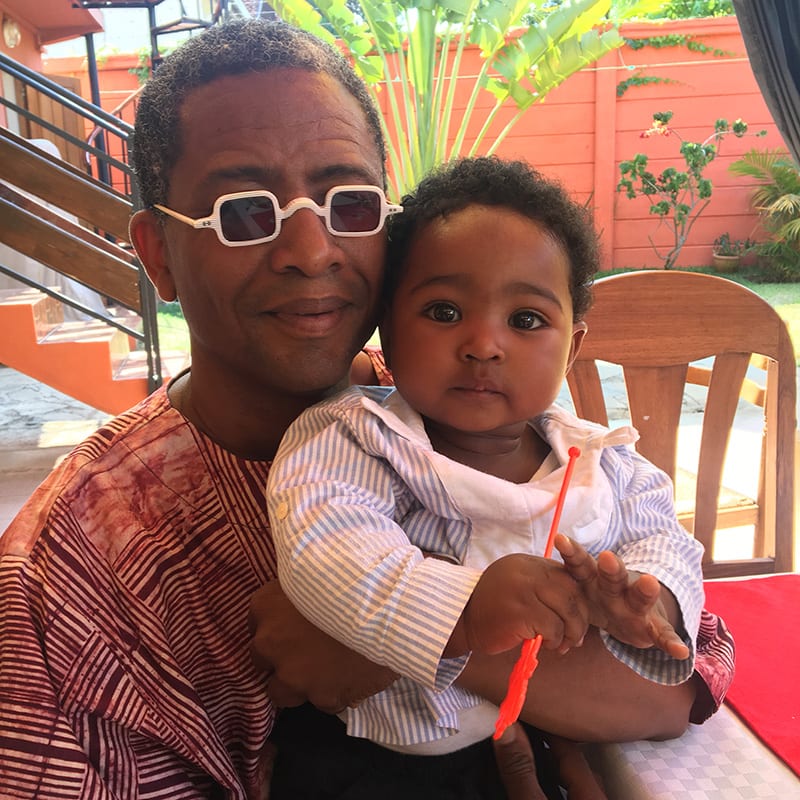 I tried various things to maximize the chances that my son would greet me with warmth and perhaps even a bit of familiarity when we met. I sent him a handkerchief drenched in my cologne, and Béa made sure he played with it. She also made sure that he saw my face on her phone while we conversed. But mostly he tried to grab the device and put it in his mouth. It was the phone, not the face, that interested him.

Our first meeting in person came after a five-hour flight from Los Angeles to Washington, D.C., a 13-hour flight from there to Addis Ababa and a five-hour flight from Addis Ababa to Antananarivo. It was both thrilling and anticlimactic. All I could say was, “Hello, mon fils.” French, the colonial language of Madagascar, is one of three languages my son will have to master, the others being Malgache and, of course, English. His only response was to give me that inquisitive look so familiar to me from pictures his mother had sent. As for the cologne, after 30 hours of travel, I doubt that enough of it lingered on me for him to say to himself, “Oh, he smells like that handkerchief.”

I thought I might cry in the moment of our meeting. I’d come close to crying several times since learning of his birth. But at the airport, there were no tears of joy from me. Just joy.

And my son seemed happy, too, though I’ve come to learn that happy is pretty much his default mode. He lives in a house with his mother, two aunts, a 9-year-old cousin and a 12-year-old uncle who pass him around both because of their love for him and his inherent entertainment value. He seldom cries. He often laughs. He seems ever ready to be entertained by whichever new friend can make a funny face or tickle the right spot.

If he has any sense that mine is special among this sea of faces, he doesn’t indicate it. He’s as happy when he is passed to me as he is when he is passed from me. He does articulate the syllables “da-da” pretty consistently. In my more egotistical moments I like to think that he’s sending me a message. But, in fact, his relatives refer to me as “Papa Niriko.” If he was consciously referring to his father, he’d probably say “papa.”

He has his mother’s large, inquisitive eyes and her curly black hair. He always seems to be evaluating his surroundings in a way that makes him seem wise beyond his years. His mother says that he is “sage,” like his father. But I know his father’s imperfections too well to accept that at face value.

Until I arrived, everyone thought he looked like his mother. Now they think he looks like me. I am not surprised by the biology of it all. I am amazed at the alchemy of it. This person who did not exist a year ago has appeared and is connected to me in myriad ways. I know that this has happened billions of times before and thus is not remarkable, let alone miraculous. Still, I count it a personal miracle, one of those phenomena worthy of large note only in one’s own small world.

When you travel for 30 hours, you have plenty of time to daydream. On the planes and in the airports, I imagined introducing my son to the three-bedroom Jefferson Park craftsman I recently rented in part because he will require more space than my old Beverly Glen house had to offer. I imagine us sharing concerts at LACMA, the Kidspace Children’s Museum, the eat-with-your-hands pleasures of Lalibela restaurant on Fairfax. We are still working our way through the immigration process, though. I’m not certain how many weeks or months it will be before Béa and Niriko will join me. That gives me a little more time to come up with something wise to say.

I keep thinking that, despite the great invocation Kunta Kinte received shortly after he arrived in this world, things didn’t go so well. He was captured into slavery and his horizons seemed anything but boundless. Yet despite his many defeats, he managed to pass down a few words of Mandinka to his progeny. Those words were enough for Alex Haley to piece together the basic facts of his ancestral path and a vision of African connectedness that has proved pivotal to the world view of millions of Americans.

I suppose my son, like me, like his grandfather and like Kunta Kinte before, will have to figure this whole thing out for himself. There are few signs or guard rails for any of us in this world. If he will forgive me for not uttering something memorable in his ear upon our first meeting, I promise to say many things along the way that might prove more practical and more memorable.

Lolis Eric Elie is an L.A.-based writer whose television credits include “The Man in the High Castle,” “Greenleaf” and “Treme.”