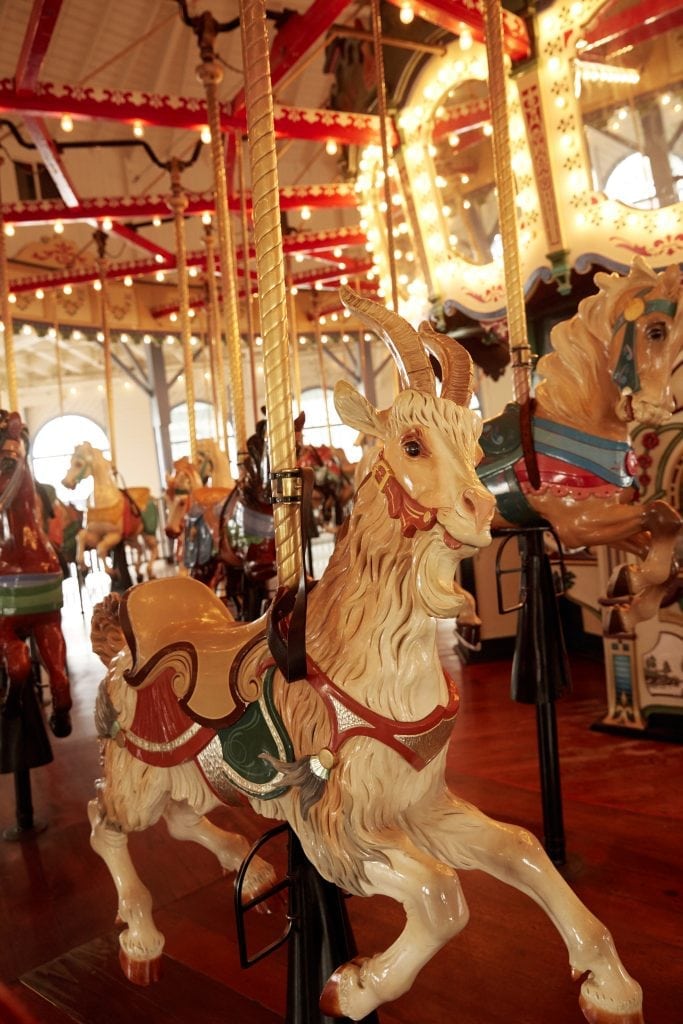 The carousel in the Looff Hippodrome on the Santa Monica Pier was created by the Philadelphia Toboggan Company and spins at a delightful speed. PHOTO BY ZEKE RUELAS

Want to share an American history lesson with your kids this summer without dragging them to a state capital? Take them for a whirl on an antique carousel.

“When you take your kids on a classic carousel they’ll learn lessons about our country that go beyond mere words. You are allowing them to physically experience history,” says Barbara Williams, who was manager of operations for the Santa Monica Pier Carousel from 1981-85.

Most people don’t know that the magical collections of Arthurian stallions and elegant chariots that make up our antique merry-go-rounds from the height of the golden age of carousels (1890s-1920s) were hand carved by immigrants who had recently stepped foot onto our shores at Ellis Island and other ports. Before several of these master craftsmen carved for American carousel companies, they sculpted regal lions into the wooden arks that housed the sacred Torah scrolls in the synagogues of Eastern Europe.

Some apprentice woodworkers immigrated here at younger ages. “It took so much courage for these teenage Italian, German, Austrian and Lithuanian boys, who didn’t even speak the language, to leave their families behind – leave all that they knew – to sail away, arriving here with, at most, $10 in their pockets to start a new life,” says Williams. “Just stop and look what we received from these brave immigrants. We received masterpieces, masterpieces that our children and grandchildren get to appreciate over 100 years later, but only if we take the time to visit classic carousels.”

Here are four places in or around Los Angeles where you and your children can still touch and ride a piece of the American Dream.

Step onto the pier to the sound of seagulls, the salty smell of ocean breeze and the siren song of pinball machines from the arcade, then scramble over the uneven planks of the boardwalk to the Looff Hippodrome and the PTC #62 Carousel inside. Experts say the Philadelphia Toboggan Company produced some of the finest examples of carousel art in America. Horses on PTC #62 race faster than those on many other carousels, clocking in at an exhilarating 4½ rpm, the speed at which all carousels used to travel. 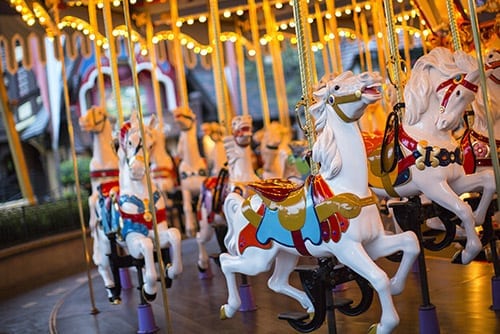 The lights above the colorfully decorated horses of King Arthur’s Carrousel glow in Fantasyland at Disneyland Park in Anaheim, Calif. (Paul Hiffmeyer/Disneyland Resort) 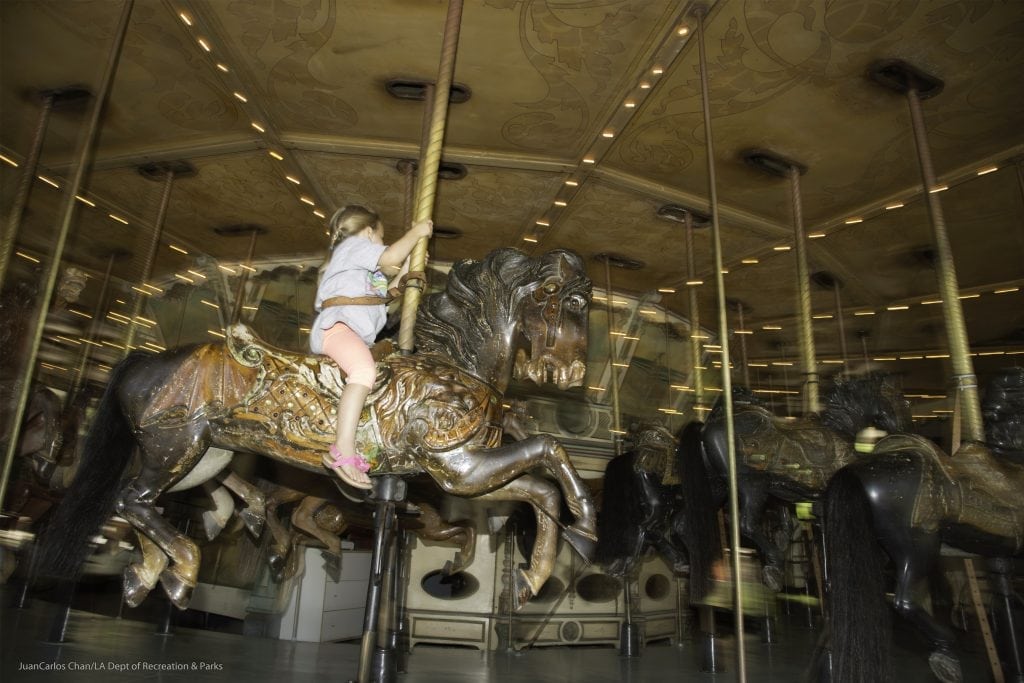 The Griffith Park Merry-Go-Round is said to have inspired father Walt Disney to create a theme park where families could have fun together. PHOTO BY JUANCARLOS CHAN/LOS ANGELES DEPARTMENT OF RECREATION AND PARKS 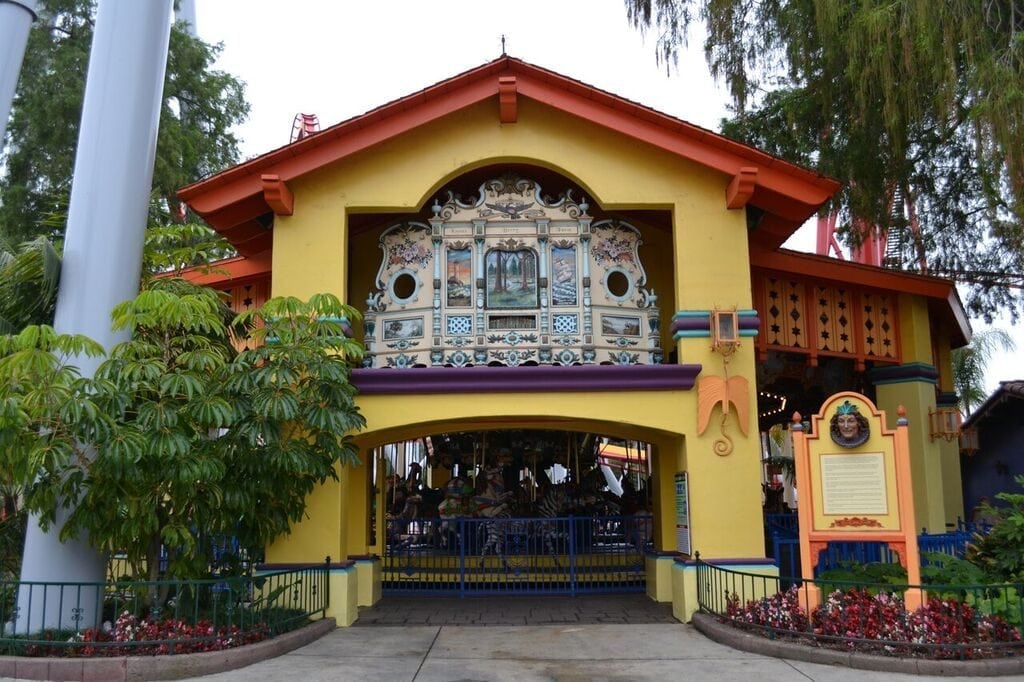 “The carousel and the 100-year-old Looff Hippodrome in which it resides achieved world-wide recognition when featured in the Paul Newman-Robert Redford 1973 movie ‘The Sting’,” says Brian Morgan, carousel historian and past president of the National Carousel Association. Marilyn Monroe, swathed in a scarf and dark sunglasses, was said to have spent hours riding the carousel at night in the ’50s. Writer William Saroyan rented office space above the carousel, and celebrities including Joan Baez were often spotted in the upstairs apartments.

The carousel and pier had fallen on hard times in the ’60s and ’70s, and were rescued from slated destruction, restored and reopened in 1981 because of the efforts of then-Mayor Ruth Yannatta Goldway, city manager John Jalili and carousel preservation crusaders Barbara Williams and Harvey Gaylin, who both personally stepped up to run PTC #62, which is now being run and restored by Adrianna Roth and her master-carver husband, Ed.

The actual bench where Walt sat is now in the Grand Opera House lobby at the theme park he eventually built, as is the big, breathtaking King Arthur Carrousel. Its four grand rows of white, hand-carved, jumping stallions remain well cared for despite their place on one of the busiest carousels in the land. Lines for the carousel are usually mercifully short, since it can comfortably host 72 riders at one go.

“This carousel was assembled in 1954-55. Its frame and some of its horses were originally from a 1922 William Dentzel carousel from the time when Dentzel was producing his greatest carvings,” says Morgan. Disney added vintage horses (from a great old Coney Island carousel) by master carvers like Solomon Stein and Harry Goldstein to the mix.

As you wait in line and look up at the eyes and manes on those horses, tell your kids they were probably carved around the time their great – or even great-great – grandparents waited in line as children for a carousel ride.

Over in a quiet corner in the dry foothills of Griffith Park, another classic carousel has stood the test of time and inspired a new generation of amusements.

“In a film clip, Los Feliz resident Walt Disney related how he developed the idea of creating an amusement park for the entire family,” says Morgan. Back before World War II, as he sat on an old green park bench on Saturdays, shelling peanuts and watching his daughters Diane and Sharon go up and down on the Griffith Park Merry-Go-Round, Disney was deep in thought. “I remember riding the merry-go-round and Daddy would be sitting there just staring at us,” said Diane Disney Miller in a 2011 interview with “The Orange County Register.” Apparently her dad was dreaming up the amusement park that would one day be known as Disneyland.

This 1926 Spillman Engineering Company carousel is waiting in the same spot, ready to inspire you while it serenades you with waltzes from its huge military-band organ. You can sit on a green wooden park bench similar to the one Walt rested on and watch your own kids go round and round.

Another Orange County theme park boasting a classic carousel is Knott’s Berry Farm in Buena Park. The horses on this carousel are nothing to sneeze at, but it’s the beasts riding beside them that deserve the attention here.

“This 1906 Gustav Dentzel carousel is the only remaining classic menagerie carousel still operating in the Los Angeles area,” says Morgan, explaining that this means it houses horses and other animals. “Knott’s Berry Farm’s carousel has a few typical Dentzel bears, ostrich, rabbits, pigs and zebra.” Individual menagerie animals thought to have been created by master carvers such as Salvatore Cernigliaro, who worked for Dentzel, are highly prized by art collectors and have garnered whopping prices at auction. It’s a treat to be able to see several of these fine animals together on a functioning carousel, even though some of the originals have been replaced with fiberglass replicas. Other merry-go-round residents include a lion, deer, giraffe and my favorite, an oversized, mischievous looking cat.

“We don’t have very many antique merry-go-rounds left,” says Williams. “They don’t make money, they’re high-maintenance and it’s really important that young people learn about them so that as time goes on and the positions of carousels become precarious, there are people who care about them who can do things to help save them.”

Bring your kids to see a classic carousel while they’re still there to be ridden – before the only ones left are kept behind velvet ropes in museums.