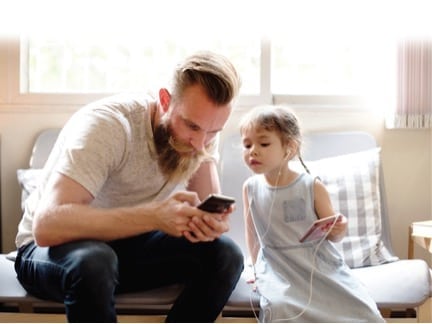 In July, after 3-year-old Jackson Verner suffered strokes that left him with limited use of the left side of his body, Jenna Bollard, his music therapist at UCLA Mattel Children’s Hospital, handed him a ukulele to play. “It forced him to start using the left hand,” says Jackson’s mom, Sara. “You have to be creative with kids.”

Jackson’s family uses drums in the same way. And when they put on tunes from the 1950s or – his favorite, Bruno Mars – “you’ll see him dancing and using both sides of his body,” Sara says. She credits music with helping turn Jackson from a kid who wasn’t walking a month ago to one who now runs around the hospital making mischief.

In hospitals, certified music therapists such as Bollard and Hana Cho, who works at Children’s Hospital Los Angeles, use music in many ways: as a distraction from pain, to help soothe and calm, to help kids express themselves and, yes, to get them moving.

Not a music therapist? You can still harness the power of song at home.

You’ll get the most help from music if you use tunes your child enjoys, and Bollard says that even babies have their preferences. Infants overstimulated by music that is louder or more up-tempo than they like might splay their fingers out in a “halt” sign or arch their backs, while those enjoying a tune will cuddle, coo or turn toward the source of the sound. But not all babies prefer lullabies. Bollard recalls one infant in the hospital’s neonatal intensive care unit who preferred songs from Stevie Wonder, Lauryn Hill and John Legend (his mom’s preference during pregnancy) over “Twinkle, Twinkle, Little Star.” 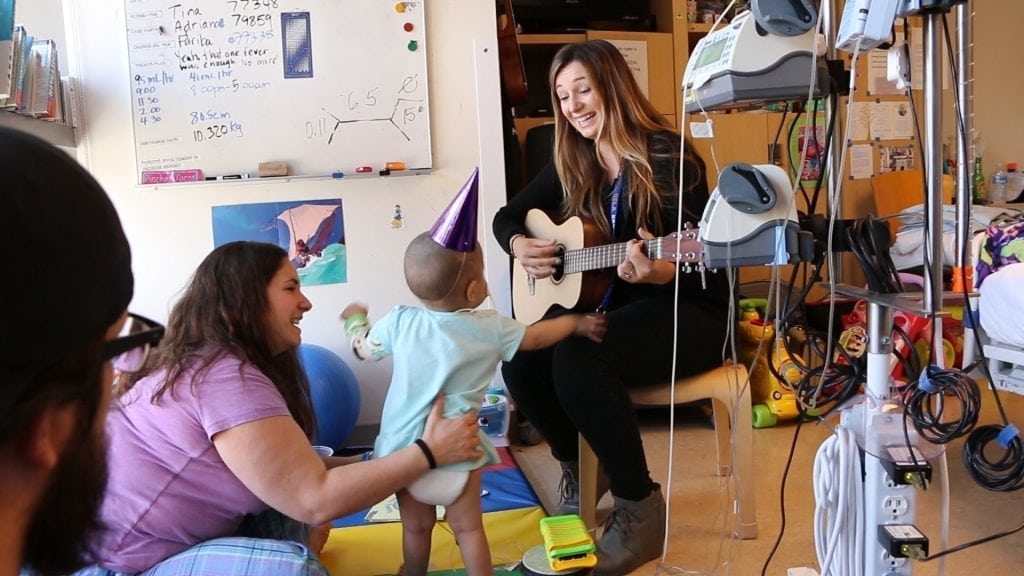 Older kids’ preferences are easier to spot. “See which kinds of music get them moving, or which kinds of music get a response,” says Cho. While “The Wheels On the Bus” might drive you crazy, this type of traditional children’s music will often do the trick. “They’re kids’ songs for a reason, because they have a lot of repetition,” Cho says. Research has also shown that kids like to hear other kids singing, which explains the popularity Kidz Bop, pop songs recorded with kids’ vocals. You can also simply ask your kids how they feel when they hear a particular song.

Bollard says kids’ preferences are important even if they don’t gravitate toward the music that you think is best. “Do not force Mozart on your child all day every day if they don’t enjoy it!” she urges. “Expose them to varied music styles, but focus on the music your child specifically responds to. You want your child to have a fun and positive relationship to music.”

Putting It Into Practice

Here are five ways you can use this relationship to make life easier – and more fun – at home:

Tune up your transitions.“Hello,” “good-bye” and “clean-up” songs have long been a preschool staple, and most parents can summon up a lullaby to sing a baby to sleep. “By using music during transitions, you are creating a cue, teaching language and associations and creating a more calm atmosphere,” Bollard says.

The specific song you choose isn’t as important as the mood, though Cho says she has had fun with “Hello, Goodbye” by the Beatles and “Hello” by Adele. “When it’s a new song, people are switched into a new mode,” she explains, so choose whatever puts your kids in that mode.

Bollard says you can invent your own songs for younger kids by choosing a phrase that describes the situation and setting it to the tune of a kids’ song you know. For example, to the tune of “If You’re Happy and You Know It,” sing, “We are going on a car ride, buckle up!”

Be the leader of the band. Build your kids’ active-listening and direction-following skills with musical games. Bollard suggests copycat call-and-response games, where each person takes a turn tapping out a rhythm, playing a simple tune on an instrument (even a homemade one!) or singing a phrase, and the whole group echoes it back. You can also try dance-and-freeze games where everyone becomes a statue when the music stops, or what Bollard calls “build a beat.” In this game, one person starts a steady, ongoing beat (clapping or on a drum or other percussion instrument), and each person adds something to it. “By the time you include the whole family, you have this goofy but cool sound experience,” she says. 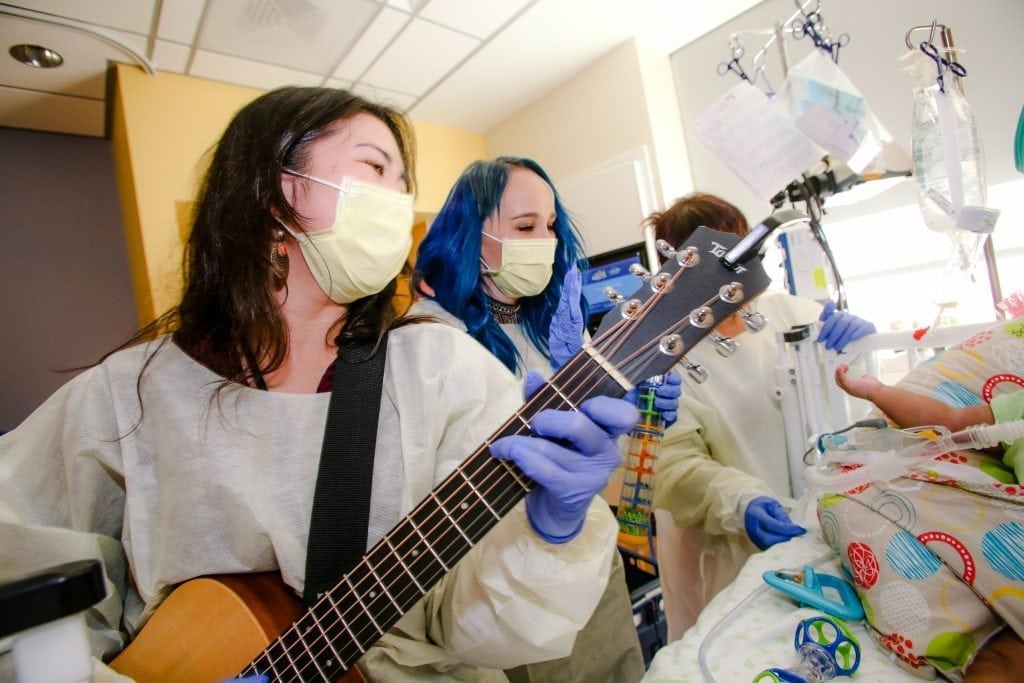 Manage a mood. Music can ease an infant’s anxiety during a bath or diaper change, help a toddler experience some “quiet time” or even motivate a reluctant kid to brush the dog or take out the trash. “Music is super-effective at changing your mood and your energy level,” says Cho.

One obvious way to do this is to play music that contrasts how the child is feeling – calm music for an anxious infant, up-tempo tunes when you spin the chore wheel.

Another way to make the shift is to use what music therapists call the iso-principle. You start with music that matches the energy or mood the child is in, then change the music gradually, by degrees, until it matches the mood or energy level you want the child to inhabit. Kiddo got the blues? Start with the blues, then gradually move to something more cheerful. Child can’t calm down? Start with something rockin’ and move to something more relaxed. Cho says YouTube and Spotify even have playlists available for a variety of moods

Curb a crisis. If your child had a fall and skinned a knee, play a favorite song while you kiss it better and the tears may stop more quickly. The music distracts the brain from the pain, and Bollard says you can boost the effect by bouncing a toy along to the tune so that vision is involved as well. 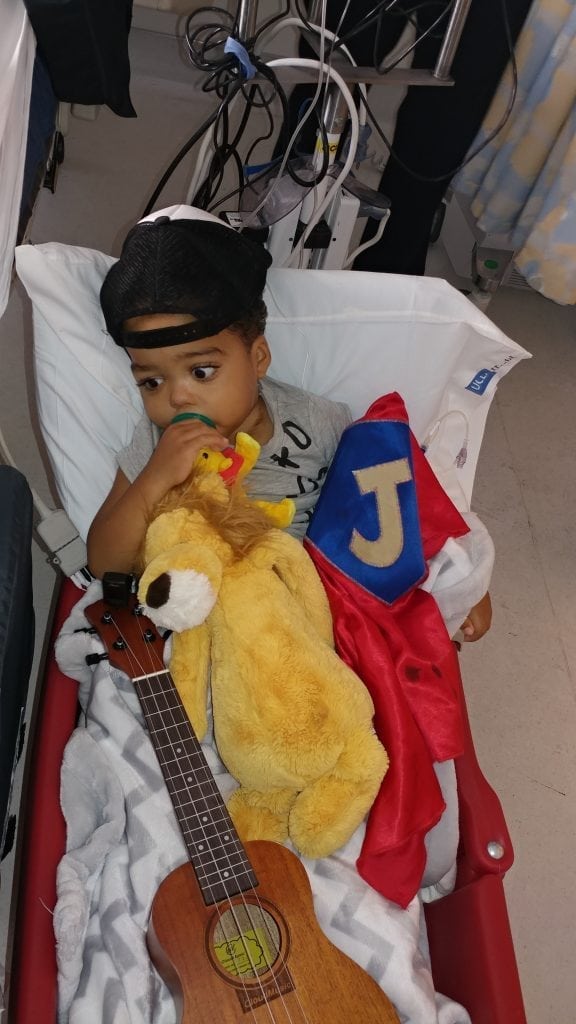 If your kids are angry with each other, “put that energy toward something productive like drumming,” suggests Cho, by giving each a drum and asking them to play what they feel. “There’s something nice about the physical manifestation of that emotion.”

You could also put on some music that the kids like and encourage them to take a dance break together. “After the music, there is typically a more relaxed and connected atmosphere to process disagreements and share feelings with one another,” Bollard says.

Connect and communicate. Whether you have a tough topic to tackle or just want to create a little family bonding time, music can be your ally. When Cho is working with families, she often encourages members to gift each other a song, then discuss what the song means to them, why the person who gifted it chose it and what it meant to the person who received it. “In a family situation, I think music is super-effective in communicating,” she says. Even music you might not approve of – something your teen or tween listens to – can help you talk about tough topics such as alcohol or drug use, sexuality and the types of friends we choose.

Parents can also share songs they loved as a kid or while they were growing up – and the memories that go with them. Your kids will love the insight, and thinking back will give you insight into how music can shape your kids’ lives. “How were you shaped into having your own music history?” asks Cho. “Maybe you like rock because of a mix tape your sister gave you when you were 10.”

In your quest to make music your family’s universal language, you might have to navigate some disputes about what type to listen to.

To get families talking about music, Cho suggests a group activity she calls “song rating.” Each person in the family takes turns sharing a song they like, and everyone else takes a turn rating that song on a scale of one to five and discussing their choices. “It gives everyone a voice,” she says. And it can lead to some surprises, when family members actually like each other’s choices. It’s a great game for the car if everyone is bickering over control of the tunes. And the discussion after each song can teach you a lot about your kids. “They actually will have some pretty cool insights into what they like and why they like it,” Cho says.

Another thing that’s fun for the car (because in L.A., as Bollard says, “We need music in the car.”) is the collaborative family playlist. The rule here is that no one gets to judge, and each person in the family gets to add a song to the list in turn. You can add to the list as often as you like, and keep building. When it’s time for a car trip, put your list on shuffle, and off you go. “It really is such a great unifying experience,” Bollard says. “It inspires a more open-minded view of one another.”

So, the next time you’re faced with a family situation – from a neglected chore list to a skinned knee – or just have some fun time to fill, turn up the music. “You have these tools,” Cho says. “They are totally available to you.” See what a difference these suggestions, or others you come up with, can make in your family harmony. “Once the door to creativity is opened,” Bollard says, “you’ll be surprised where you’ll go.”