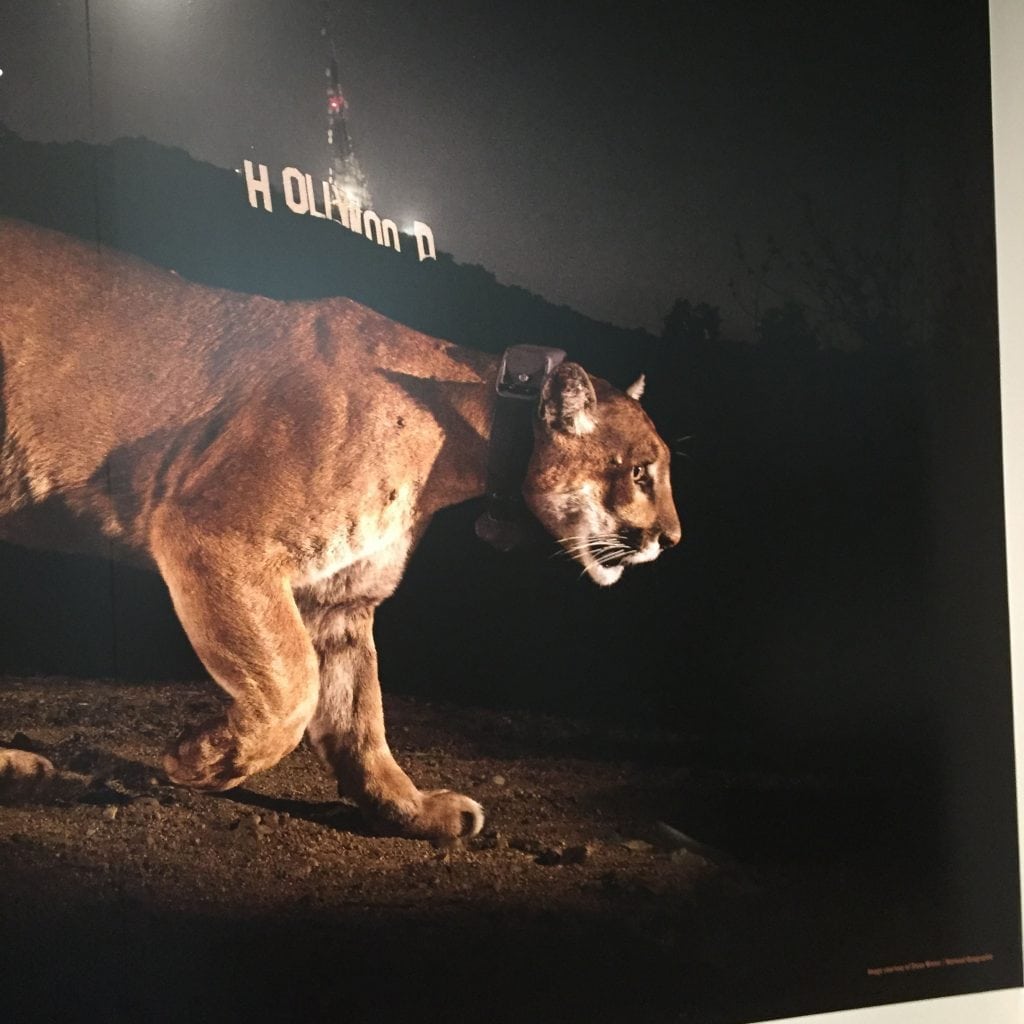 A well-known photograph by Steve Winter of the mountain lion known as P-22 is part of a new exhibit at the Natural History Museum.

To get into the Natural History Museum’s installation about famed Griffith Park mountain lion P-22, you have to cross the freeway. OK, it’s not really a freeway, but the 10 lanes of scaled-down moving traffic projected onto the floor at the installation’s entrance make an impression.

“The Story of P-22, L.A.’s Most Famous Feline,” is a love letter to the big cat famous for crossing both the 405 and 101 freeways on foot. Tucked beside the Nature Lab, the installation is also part of the NHM’s mission to connect people with the urban nature all around us. “We really are more than just a museum about interesting animals from faraway places and faraway times,” said NHMLA President and Director Lori Bettison-Varga as she welcomed visitors to a sneak peek at the installation. “We’re about the nature in our own back yard.”

Another ongoing mission of the NHM – following a major renovation and the opening of its interactive Nature Lab in 2013, and events such as Summer Nights In the Garden throughout July and August – is to make science fun and approachable for the average citizen.

That mission is near to the heart of Miguel Ordeñana, now the museum’s Citizen Science Coordinator and Wildlife Biologist, but also the first wildlife biologist to photograph P-22. Ordeñana grew up near Griffith Park and, after college, decided to “give back” to the park through the camera-trapping project that brought P-22 his fame.

The NHM exhibit follows the big cat’s journey from his birth near Malibu to his current home in Griffith Park, highlighting the dangers he faced along the way. These include territorial disputes with other mountain lions, danger from human neighbors upset by the big cats’ hunting (including P-22’s infamous killing of a Koala at the Los Angeles Zoo), a case of mange contracted from eating poisoned prey – and those freeway crossings. 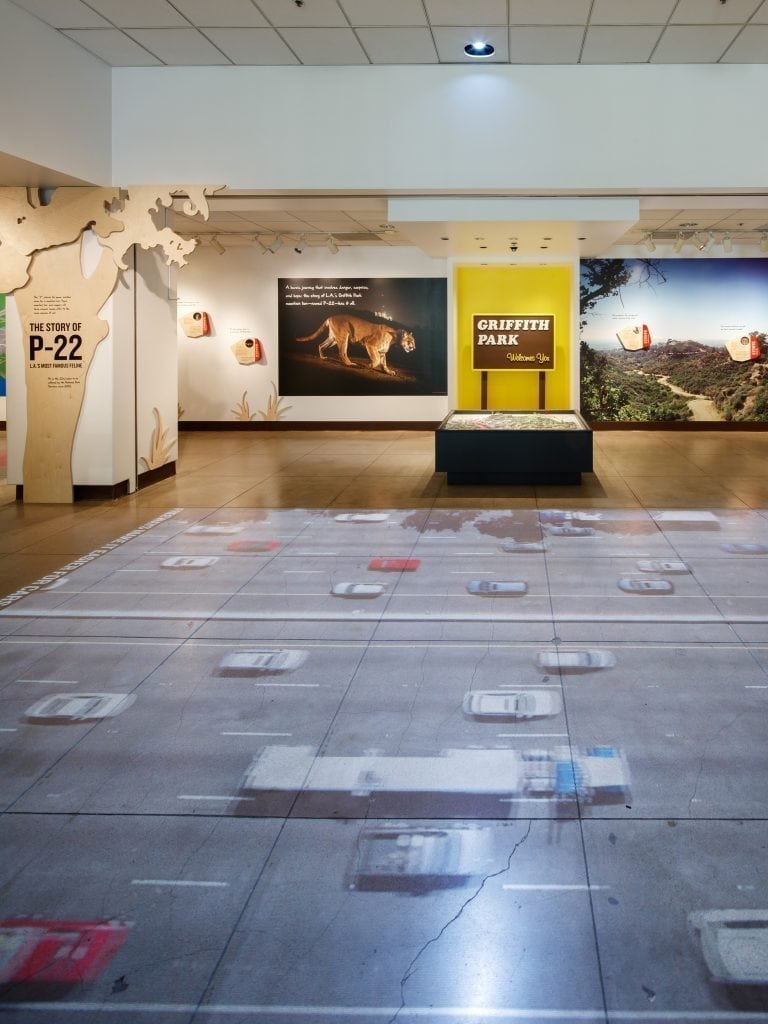 Several lanes of moving freeway traffic projected onto the floor at the installation’s entrance give visitors perspective. PHOTO COURTESY NHM 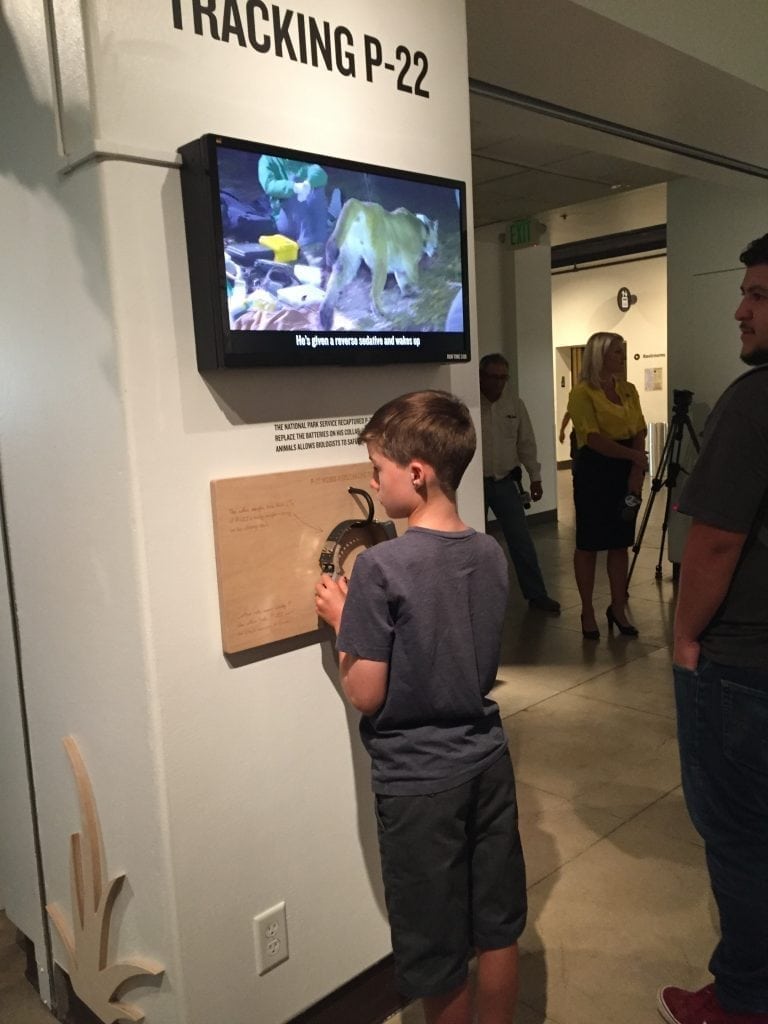 A museum visitor checks out a tracking collar like the one worn by P-22. PHOTO BY CHRISTINA ELSTON

Also featured are an actual tracking collar like the one P-22 wears and the very camera trap that first captured him on film. A 3-D map of Griffith Park complete with moving traffic lights on its bordering freeways offers a birds-eye view of the mountain lion’s home, and a recorded soundscape showcases the other urban wildlife that shares his terrain. If you, too, are an urban nature dweller, the rattlesnake sounds will make you jump!

Like P-22 in Griffith Park, the tiny installation is a bit boxed in, but even that is turned to advantage. Markings on the floor indicate the scale of P-22’s actual territory, giving visitors a sense of the cramped space he has adapted to. It’s well worth a visit for those fascinated by the puma who has posed with such L.A. landmarks as the Hollywood Sign and become a star in his own right. What you see, hear and touch as you explore the installation will give you a new appreciation for our unique blending of urban and natural habitats – and might give you pause the next time you’re driving up Interstate 5 or along the 134 Freeway past the park where P-22 still roams.