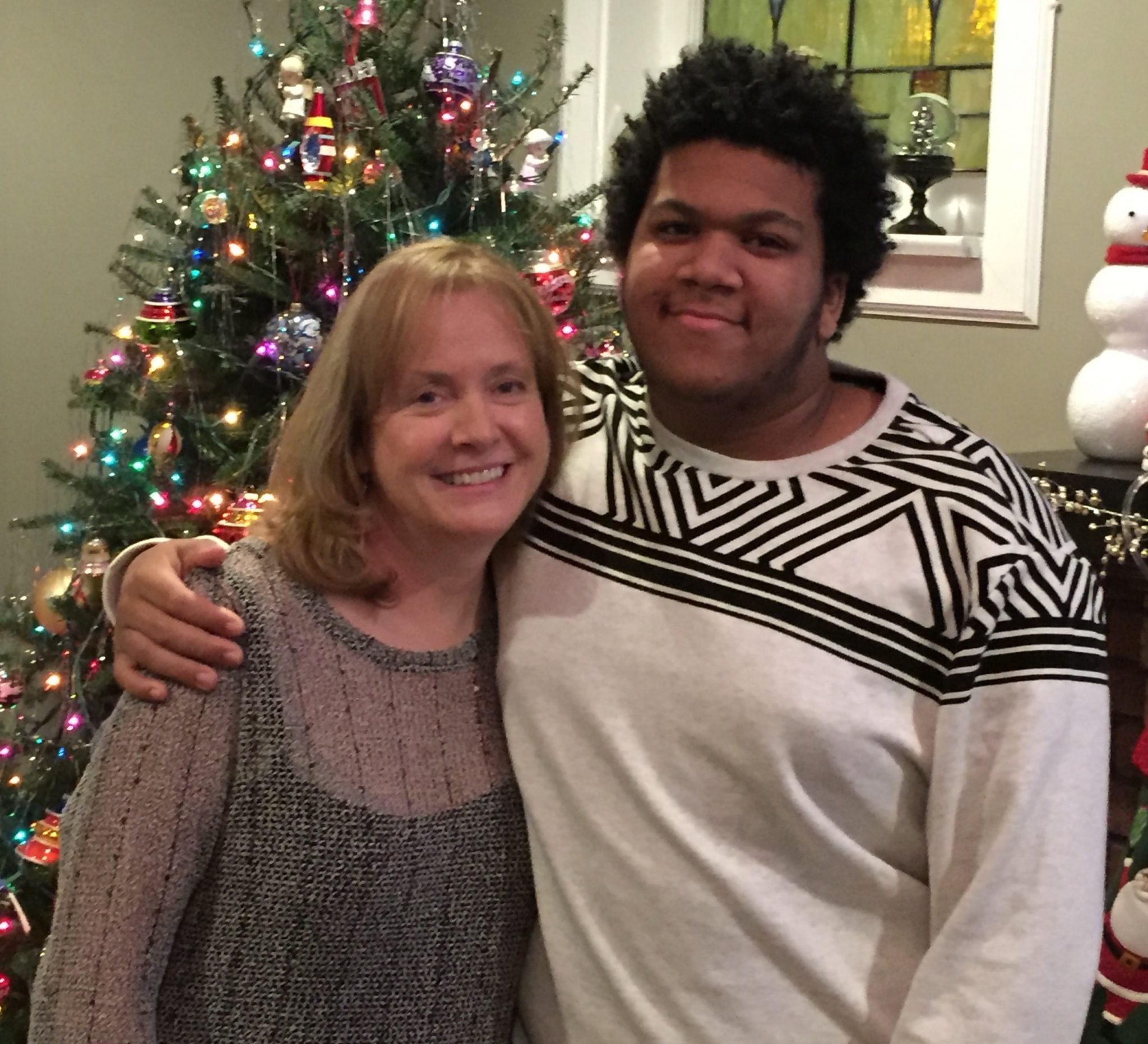 Lynne Baumhoff adopted her son when he was 2 weeks old. At 17, he towers over her and is the love of her life. PHOTO COURTESY LYNNE BAUMHOFF

Thousands of children desperately need a home, or even just a safe place to sleep tonight. And they aren’t in some developing country. They are right here in Los Angeles County.

“There are 35,000 children in the foster-care system,” says Lynne Baumhoff, director of adoptions and foster care at Vista Del Mar Child and Family Services, which provides adoption and foster care services in Southern California. “Some are in foster homes, but there are only 12,000-16,000 group home beds available for 20,000 children that need them.”

And, according to Baumhoff, the L.A. County Department of Children and Family Services receives 14,000 to 16,000 calls per month about children who are being neglected or abused in their homes. For those who must be removed, there aren’t enough safe places.

“Every year the number of homes available to these abused kids goes down,” says Marianne Guilfoyle, division director of Permanency Programming at Five Acres, a Southern California nonprofit dedicated to finding permanent, loving homes for children who have suffered abuse or neglect. “People are scared away by the horror stories they hear on the news, but the vast majority of families that open their homes to these kids have incredible, happy experiences.”

In fact, many happy families have been built through foster care and adoption. Baumhoff, who has worked to help kids find homes for 20 years, adopted her son when he was 2 weeks old. “He is almost 17 now and towers over me and is the love of my life,” she says.

Before Danielle Weir adopted her now 22-month-old daughter, Eden, she was secretly afraid the two might have a hard time bonding. She later learned, by talking to many other moms, that birth mothers frequently have these same fears. “It takes time to create a bond,” she says. “It isn’t something that happens overnight, but the first time they smile at you or when they giggle, it just melts your heart.” 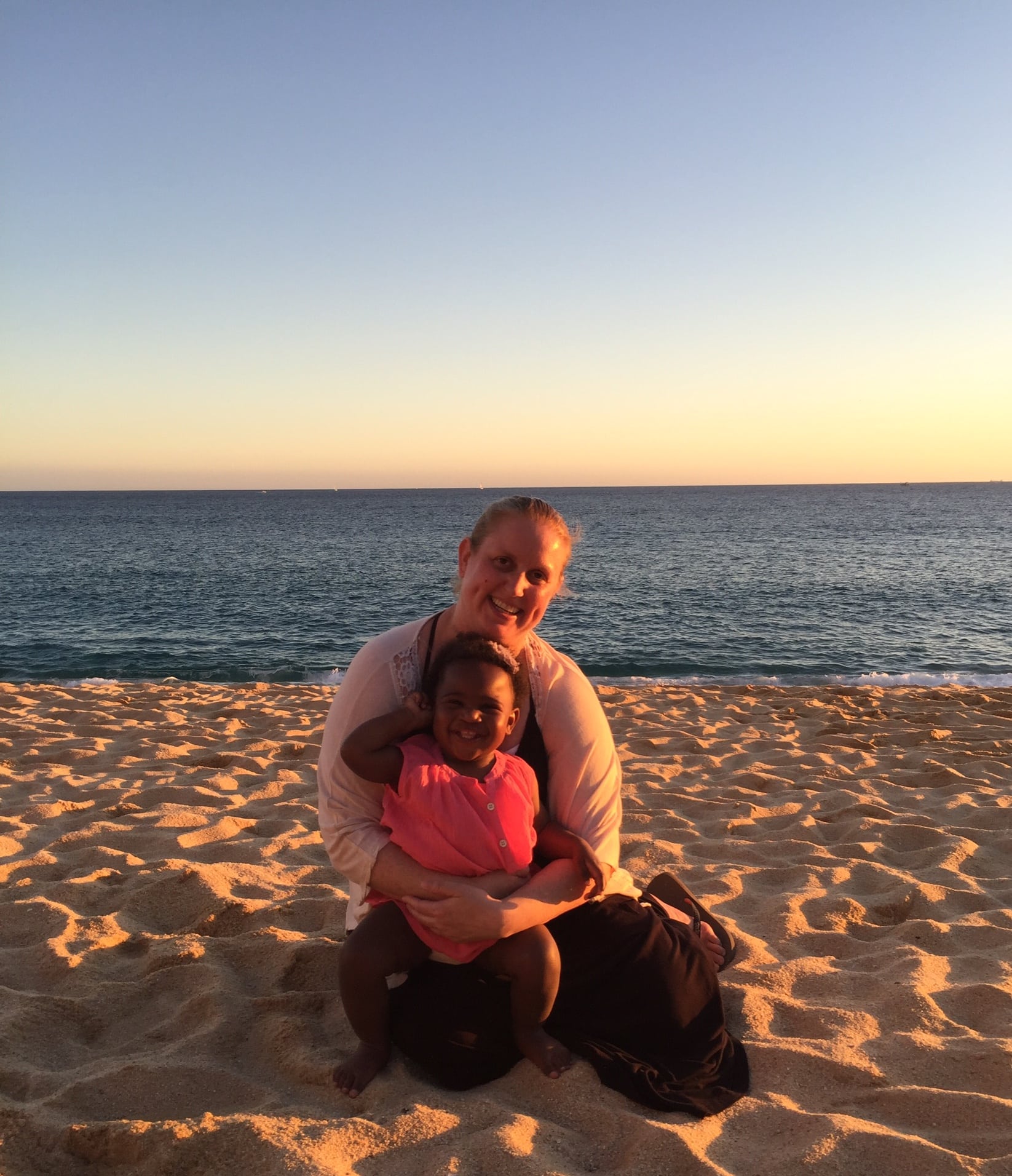 Danielle Weir adopted daughter Eden and learned that even birth moms have fears about bonding with their babies. PHOTO COURTESY DANIELLE WEIR

Weir adopted Eden through Vista Del Mar’s Private Infant Program, which places infants straight from the hospital into their new homes. These are open adoptions where the birth mom – with planning help and legal support from Vista Del Mar – chooses the family in which her baby will be raised. Weir says she wishes more people would look at adoption as their Plan A instead of their Plan B. Although her Plan A also included marriage, Weir always knew she wanted to adopt. “I wanted to be a mother and I knew there was a child out there who needed a mom,” she says.

Darlynn Childress and her husband, Kevin, adopted their sons, Lincoln and Sawyer, who are now 12 and 10, from Russia. “We tried to get pregnant for 18 months before we found out why we couldn’t,” says Childress. “Instead of going through infertility treatments, we decided to adopt.” Childress says she and Kevin chose to adopt internationally because, unlike in the U.S. where we have a system that provides temporary homes to children in need, in some countries these children languish in orphanages.

After attending a 2004 seminar by a company that helped arrange European adoptions, Darlynn and Kevin applied to adopt a boy from Russia. Within a few months, they were offered the chance to adopt Lincoln, saw a photo of him and instantly fell in love. He was 12 months old, and the couple flew back and forth to finalize the adoption and bring their new son home.

With Lincoln, Childress says things were heavenly and she felt just like any other new mother. But when she and her husband decided to adopt then 11-month-old Sawyer a year and a half later, Sawyer struggled with trust issues and Lincoln developed behavior problems.

After reading every parenting book she could find and finding little support for adoptive families, Childress started attending classes at Vista Del Mar – which offers counseling, support groups and home-study services and directly handles adoptions from the Philippines, Thailand, Mexico and Brazil. If a family wishes to adopt from another country, Vista Del Mar will work with private agencies to help make that happen.

At Vista Del Mar, Childress encountered attachment parenting therapist Jeanette Yoffe, who uses a series of creative bonding exercises to rebuild the type of trust that some children born into institutions lose during their early months of life. “She was amazing,” Childress says.

Childress went on to become a parenting coach, and became involved with a crowdfunding organization called Adopt Together that helps families finance adoptions. She advises adoptive parents to talk to other adoptive families, and find a mentor for support.

Joey Porter and Ed Martin had been a couple for 20 years before Porter started to daydream about the expansion of their family. “It wasn’t an option when we were younger,” he says.

The couple decided to go through the Foster to Adopt program at Vista Del Mar because they really wanted to give a child who would otherwise experience the turmoil of being shuffled between homes or institutions a forever home. The program is free and the state helps offset some of the costs associated with raising a child and provides health insurance.

They met son Xavier, now 9, when he was 4 days old. Son Jaheim, now 4, came to them from the hospital NICU. Both boys are African American, and both had mothers who had been overwhelmed by life and had their children placed into foster care.

Porter says that even though parenting has limited their freedom to pick up and go whenever they wanted, he and Martin are incredibly grateful. “It made us more of a couple,” he says. “Before, we were able to have our own opinions but now we have to present a united front.” 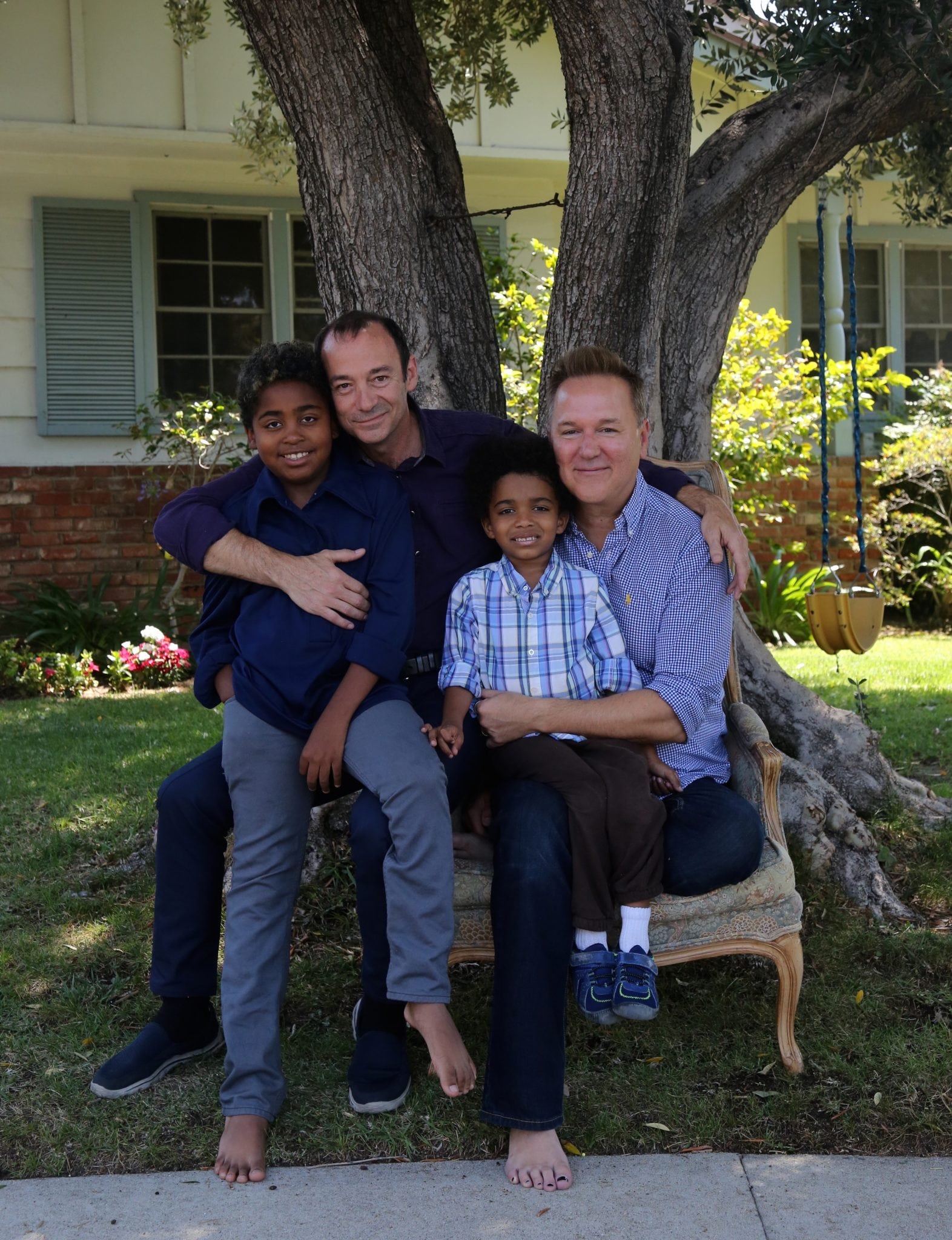 Xavier, Joey Martin, Jaheim and Ed Porter have formed a happy blended family. Martin and Porter adopted the boys through the Foster to Adopt program. PHOTO BY JAMIE JOHNSON

Martin says he loves the mixed-race family he and Porter and their sons have created. “Being in L.A., they fit right into the melting pot,” he explains. Porter says he tells the boys that “the things that make you different and unique will make you better when you’re older.” Both dads say their sons act, fight and love each other just like brothers. Recently, though, Xavier began asking about his mother, and shed a few tears around Mother’s Day. Porter says that the services at Vista Del Mar might come in handy here. “This might just be the time,” he says.

Baumhoff says there aren’t many reasons a loving family wouldn’t qualify to foster or adopt a child. “The only things that would disqualify a person is any history of child or domestic abuse or a recent DUI conviction,” she explains. But if a couple doesn’t agree about adopting, she advises putting off the decision until both can open their hearts to the experience.

Guilfoyle says fostering first allows parents to meet a child’s other relatives and learn a bit more about the child. “They get to learn about that child’s history. That’s not available through other forms of adoption,” she says. Becoming a foster family requires only 32 hours of training, and Five Acres and Vista Del Mar offer counseling and support.

Five Acres offers guidance through the foster care and Foster to Adopt processes, and also connects adoptive parents and children with mentors who have experienced adoption. They also have a respite care program, where parents who might be interested in fostering a child can provide temporary support (one day to one week) to a child whose family is in crisis.

Visit www.5acres.org or www.vistadelmar.org to learn more, and to support the work of people like Baumhoff. “I love what I do,” she says. “I love helping people create their families.”

Rina Baraz Nehdar is a mom and frequent contributor to L.A. Parent.