This mom of three juggles family life and advocacy with the Epilepsy Foundation of Greater Los Angeles. 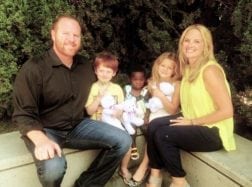 Shannon Abdulwahab, right, doesn’t let epilepsy stand in the way of being a wife to husband Andy, left, and a mom to son Chase, daughter Farrah, and daughter Drew. PHOTO COURTESY SHANNON ABDULWAHAB

The alarms rings at 6 a.m. and, like most moms of young children, Shannon Abdulwahab hits the ground running. There are meals to prepare, kids to dress, teeth to brush and dogs to drop off (at doggie daycare, of course), all before 8:15. Sound familiar?

The difference is that, through it all, Abdulwahab has to worry about having a life-threatening seizure due to a genetic condition called juvenile myoclonic epilepsy. “They happen everywhere, from my house, to the car, on the treadmill, walking my dog. I had a horrible grand mal seizure in a Petco parking lot when I was pregnant with my daughter Drew, who is now 7. I was lucky to come away with a handful of staples in my skull and a few stitches on my face,” Abdulwahab says.

She has survived hundreds of seizures since her first, when she was 10 years old. Her most severe seizures have occurred during her two pregnancies. When she was pregnant with her son, Chase, who is now 5, the seizures were so bad that the doctors asked her husband, Andy, if they wanted to save her or their baby – because they were unsure they could save both. They both survived, and now Abdulwahab is on a mission to help stop seizures and win the fight against epilepsy.

Tell us about your involvement in the Epilepsy Foundation of Greater Los Angeles.

I got involved in the foundation to give people hope. For me, it started out personal, because there is a high chance that one of my kids will have epilepsy. It’s genetic. My nephew Wyatt, who is now 8, was diagnosed a year ago with the same exact type as me. Now, my work is also for everyone else. I have co-chaired the past two Epilepsy Walks at the Rose Bowl, the most recent which raised over half a million dollars and had over 4,000 runners and walkers. I actually couldn’t believe when I showed up to the walk this year and saw 83 of my closest friends and family had come out to walk on my team for Wyatt and myself.

You mentioned that the biggest struggle for you is the lack of control. Now you have been seizure-free for almost five years. What do you attribute this to?

I struggled for so long because I so badly did not want to have epilepsy. There was such a stigma, and I didn’t want anyone to know. Now I’m telling everybody. The reality is that I do have epilepsy and I have to take care of myself for me and my family. I have good doctors and the right medication. In order to have control over this thing, you have to follow the rules. I have the most control if I give in and say, “Alright, this is me. This is my life. Do the best I can.” I am learning to take good care of myself and recognize my triggers, but it’s hard as a parent. I get tired sometimes and I feel bad about taking afternoon naps, but this is what I have to do. This is real. It’s not going anywhere. I have epilepsy. I have epilepsy until the day I die.

About 200,000 new cases of seizures and epilepsy occur each year. What personal message would you like to share?

Just because you have epilepsy, it doesn’t have to hinder you from doing the things you love and living the life you want to live. I have done everything I wanted to do. I am a wife, a mother, I have a Master’s degree, I drive, I work, and I am the first person on record with epilepsy to adopt a child from the Congo (my daughter Farrah, who is now 2 1/2). Your life is not over. It’s a battle, but you can do it!

Lisa Castillo, LCSW, is a Woodland Hills psychotherapist, writer and mom of two.