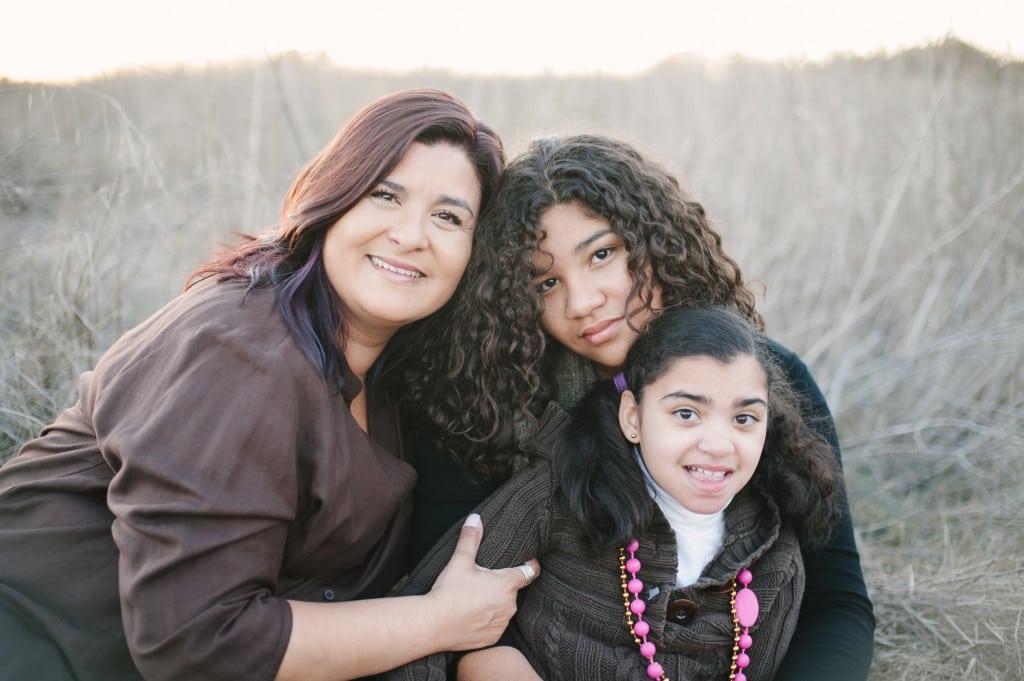 For 13-year-old Brianna Baker, joining a support group for siblings of children with special needs was natural. She had essentially grown up visiting Encino-based McRory Pediatric Services as her younger sister, Olivia, underwent a series of occupational, physical and speech therapies.

After Olivia, now 10, was officially diagnosed with Rett syndrome, a rare neurological disorder that impacts speech and motor skills, Brianna began seeing a counselor on her own and, more recently, joined McRory Pediatric’s Sibshop multi-week workshops.

“With the Sibshop, she realized there are other kids who are just like her,” says Brianna’s mother, Silvia. “As the oldest in the group, she was like the big sister to those other kids. It became very important for her to show them that while it’s tough growing up with a sibling with special needs, you can be OK.”

Sibshop workshops are part of a national organization, Sibling Support Project (www.siblingsupport.org). With more than 475 Sibshops now operating in eight countries, the model is almost entirely play-based, inviting the brothers and sisters of kids with special needs to socialize, play and share their feelings in a welcoming space.

“It’s somewhat therapeutic, but it’s really about having fun and having a play-based outlet,” explains Jenny Pendleton, MFT, co-leader of McRory Pediatrics’ six-week Sibshop series. “A lot of it is based on finding commonalities and allowing the kids to have a place to express themselves safely.”

There are several common threads that seem to unite siblings of children with special needs, no matter what type of disability they may be dealing with at home – cognitive, behavioral or physical. While there is no quick fix for making life easier for these kids, experts do offer some practical coping solutions.

Don’t Let Them Take On Too Much

Pendelton points out that many kids whose siblings have a disability naturally develop a much higher level of maturity and responsibility than their peers, and that this is often paired with a tendency toward perfectionism.

“As they see it, their parents already have the burden to make sure the child with special needs is getting what they need, and they don’t want to cause any bumps in the road. That’s a lot to deal with,” she says.

Even when parents put forth their best efforts to not put too much responsibility on a sibling, it’s often inevitable, as their resources are stretched thin.

A series of tips created by the Sibling Support Project lists one of the key factors parents have to keep in mind for their typically developing children as “the right to one’s own life.” While a child may naturally develop a sense of responsibility and adopt a caretaker role toward their sibling with special needs, parents should not make assumptions about responsibilities typically developing siblings may assume without a frank and open discussion.

While Baker has always been conscious about not putting too much pressure on her older daughter, she still recalls how, at an early age, Brianna began getting involved in her younger sister’s development.

“When she came to therapy sessions with us, she would help out or she would sit and watch, really studying how they worked with her little sister,” Baker says. “Now, 10 years later, she’s become an extension of the therapist and of me when I can’t always be next to her sister – helping her to stop screaming, how to learn to go from kneeling to standing to walking, scooping her up when she falls down.”

Give Them One-on-One Time 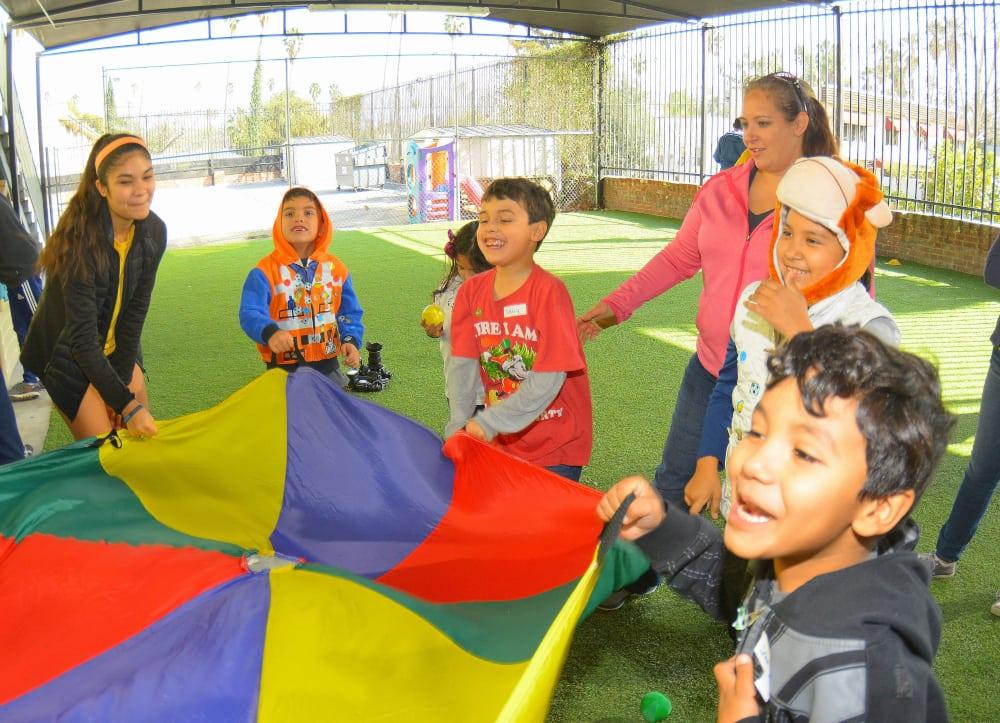 Professional Child Development Associates in Pasadena offers programs for children with a range of special needs – and also offers support groups for their siblings. PHOTO BY WILLIAM KIDSTON

Diane Cullinane, M.D., executive director and co-founder of the non-profit Professional Child Development Associates (PCDA), points to another issue that often crops up among families dealing with a disability. “Parents feel they can’t spend as much time with the other child, who, of course, often feels left out,” she says.

Cullinane oversees the Pasadena facility that serves children with a wide range of developmental disabilities, including autism, cerebral palsy, epilepsy and Down syndrome. PCDA’s Sibling Saturdays workshops are geared toward ages 5 to 12. “The Saturday Sibling program gives them a chance to have their own special time. It’s really that simple,” she says.

Depending on the severity of the condition, managing the day-to-day routine for a child with special needs can become an all-encompassing job. Being at home, going to school, going to therapy appointments, and even something as seemingly straightforward as setting up a play date can require detailed research and preparation. With that kind of energy required, it’s no wonder the needs of a typically developing child can easily be overlooked.

Yet, Cullinane recalls learning from panel discussions that one of the biggest takeaways of raising a child with a disability is that parents often say, “I wish I had spent more time with my other child.”

Her advice to these parents is to carve out even a few minutes each day or each week to spend alone with the typically developing sibling, stressing that these children can benefit enormously from any time dedicated just to them.

Baker works hard to find ways to set aside one-on-one time with her elder daughter. “It might be staying up late to watch a show or have tea together,” she says. “We have to steal little moments every day and find a bit of normal, because our life isn’t normal.”

But even the most well-intentioned parent can find it challenging to create space for those meaningful moments. “[Brianna] will remind me to make time because I do forget,” Baker says. “It’s not that I’m not thinking about her, it’s just that by the time the day is done, I’m mentally, emotionally and physically spent.”

Help Them Cope With Peers

Sibling programs provide a welcome social outlet, and also a comfortable space for kids to talk about another pervasive issue: teasing and bullying from peers, directed either at them or their sibling with special needs.

Most relationships between typically developing siblings include a healthy dose of rivalry, but siblings of kids with special needs might feel the need to protect their sibling. Finding support in weekly social groups can ease the burden simply by allowing kids – who are already at a vulnerable age – to share their emotions and engage with others who are dealing with similar challenges.

Watch For Signs of Frustration

For parents who are juggling multiple therapies for their child with special needs, the cues to seek out a support group for siblings may not immediately be obvious.

Hilya Delband, Psy.D., director of clinical development at Working with Autism in Encino, which hosts weekly sibling workshops, says school age can be a critical time for many kids. “As they start going to friends’ homes, they begin to notice that other kids aren’t necessarily facing the same things they do, like a brother or sister who has tantrums or who is not verbal,” she says.

Delband also notes that awareness may bring with it increased embarrassment, anger or frustration over the fact that other kids aren’t dealing with the same types of stresses at home. “It feels unfair or they may be angry, and we let them know it’s OK to have that range of feelings so they don’t end up internalizing it,” she says.

Working with Autism’s workshops give siblings a safe place to verbalize emotions and teach basic coping skills, including deep breathing, guided imagery and other relaxation exercises to help kids deal with their feelings in positive ways.

Be Open About the Future

Perhaps one of the most stressful parts of a special-needs sibling relationship is envisioning what the future might look like. Will the responsibility fall to a brother or sister to provide long-term care? Will a sibling have the freedom to follow his or her own ambitions?

According to Sibling Support Project guidelines, parents can help support their children by being transparent and making information available, developing concrete plans and involving their typically developing children in the decision-making process. On top of that, it’s important to create backup plans and anticipate that a sibling’s perspective might change over time.

The sibling bond can be the most enduring, longest-lasting relationship in the family. Over that time, it’s inevitable that your child will go through a huge spectrum of emotions and concerns. But when brothers and sisters are included in the process and given the message early on that they have their parents’ blessing to pursue their dreams, their future involvement with their sibling will be a choice instead of an obligation.

As for Brianna Baker, she is determined to become an attorney when she grows up – one dedicated to representing the voices of children just like her little sister.

Sarika Chawla is an L.A.-based writer, editor and mom.