Steve Everett plays and promotes power soccer, where adults and kids play together from their power wheelchairs, and learn powerful lessons. 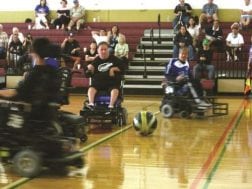 When Steve Everett talks about the sport of power soccer, played in power wheelchairs, he makes it sound fun. “We have these guards on the front of our chairs. They almost look like snow plows,” he says, “and when we spin in a circle, that’s how we can generate a lot of power in kicking the ball. It’s called a spin kick.”

The game is played four-on-four, on regulation basketball courts with goals instead of nets. The speed of the chairs is regulated for fairness and safety, and players can officially be as young as 5 – though most start around age 8. Men and women, kids and adults, play on the same teams.

Everett is captain of the SoCal Vaqueros Power Soccer Club out of Glendale and is Western Regional Director of the U.S. Power Soccer Association (www.powersoccerusa.org). He wants to get more players, and parents, involved, “just like AYSO parents.”

What do kids get out of Power Soccer and similar sports?

One of the greatest things about wheelchair sports is that you get to learn wheelchair skills, and you also learn people skills and teamwork. You start learning from these other participants some of the things that they know how to do. Daily life stuff. How to transfer to a car. The difficulties in navigating an airport to fly to a tournament.

What’s in it for parents?

When a child is born with a disability, or acquires one, I think there’s a tendency to not really want to allow them to explore possibilities. This lets you get around other parents that maybe had those feelings, but have learned to trust and allow their children to get involved in what life has in store for them.

What is your favorite power soccer moment?

There was this kid named Jamie. He was 9 or 10 and he had cerebral palsy, and he had joined a new team that was playing in a tournament, and basically getting shut out against more-experienced teams. Eventually, they were scheduled to play us.

We scored several goals early on, and the game was basically over. I had a talk with my teammates about letting this other team have a little more room to move the ball, so they could have a chance to experience the game. And I asked my coach to put me into the goal. The opposing team began moving the ball, and I saw the ball come toward the goal, and I saw Jamie following it. I blocked the ball, but hit it toward him, and he scored a goal. He almost climbed out of his wheelchair. You would have thought he’d just won the World Cup. He was screaming, “I scored a goal! I scored a goal!” And he threw his arms up in the air and clearly wanted to high-five somebody. I was the only one around. I was the goalie he’d just scored against, but I put my hand up and high-fived him. It was one of the most touching moments I’ve had as an athlete. Then I turned away because I was starting to get a little emotional, and I looked up and I saw the referee standing there, and he had tears in his eyes.