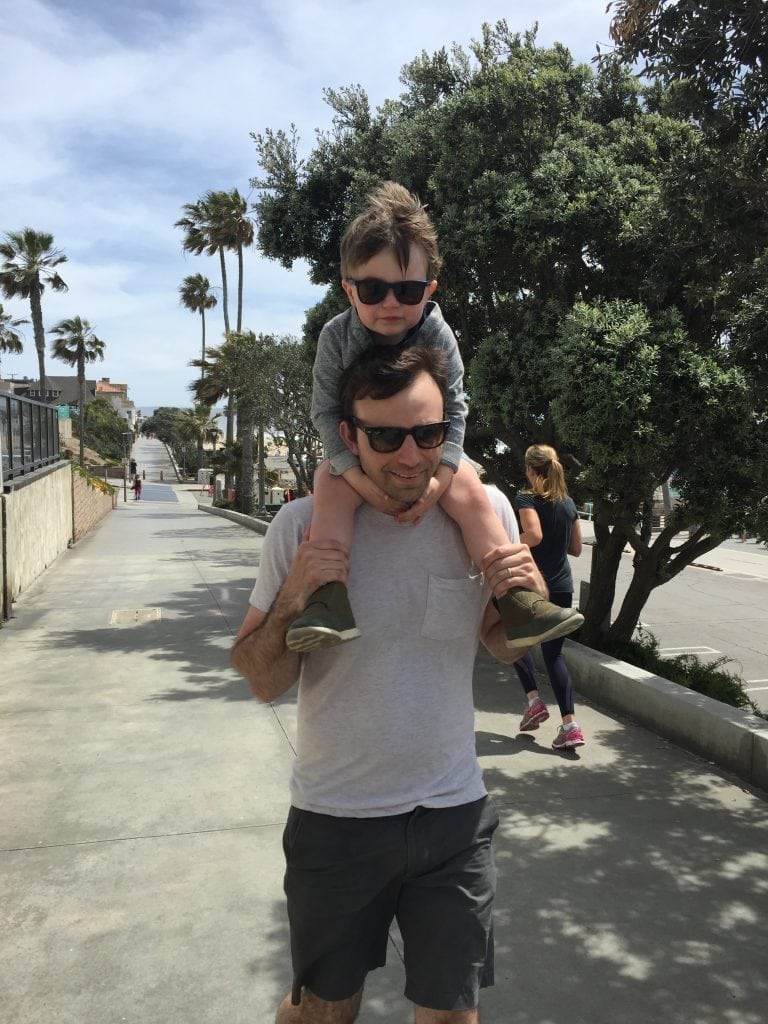 To many of us in and around Los Angeles, summer fun at the beach is an afterthought, only beckoning when the inland heat calls for relief. A friend from Studio City once referred to it as “the great A/C unit to the west.” Out-of-towners often accuse us of taking our 75 miles of Pacific coastline for granted. And they’re right.

I’m feeling especially salty at the moment because I recently took my boys to the beach and it all kind of blew up in my face – the sand, that is.

My wife, Kate, and I woke up to the sun shining one recent weekday, Google reporting that it was going to be a perfect 81 degrees. Summer filled the air. The pull to hit the coast was undeniable, so we decided to pack up the car (and when you have kids, there’s a lot to pack), cover baby Leo and 2-year-old Hank and ourselves with that horrible white chalky kids sunscreen and head for the coast.

As the car crept closer to the ocean, we noticed the palm trees bending in wind that appeared to be hurricane force and low clouds layered above like marzipan. Our hearts sank. The scene was not so sweet, to borrow from the surfer’s parlance. This, of course, is very common, especially in June. All you can do is hope for that marine layer to burn off before your patience does.

My millennial cohorts treat the ocean as a Hollywood studio set designed to socially engineer lifestyle envy. The goal is to devise an illusory world of dreamy ocean horizons as a backdrop for adorable, unblemished 3-year-olds wearing Wayfarers. My friends bring low-profile chairs, umbrellas, coolers of kombucha and watermelon water (not coconut water – so 2014 of you!), ironic second-tier Disney movie beach blankets (Do you have an “Oliver & Company” beach blanket? I doubt it.), body boards, sand-sculpting sets, portable lacrosse and disc golf sets.

Then there’s the food. For my millennial cronies, patronizing cafes such as Huckleberry in Santa Monica for some sourdough and deli salads to bring to the beach is trend-worthy. I have seen venturers from the Valley bring a selection of savory pastries from Porto’s in Burbank. For our sojourn, I swung by the oddly austere Playa Provisions in Playa del Rey. What the establishment lacks in music and personality it more than makes up for in ideal beach fare. I picked Hank up some handcrafted ice cream and a croissant. And we shared a near-perfect tuna sandwich.

But enough food. After you eat it’s time to catch some rays while you refresh your Instagram likes, then engage in all of the aforementioned beach activities with your children. They each get old after about five minutes, so my fellow millennials will often leave by 1 p.m. to beat traffic and get to the next sound stage, as it were.

We did our best to hang in there, and the marine layer did eventually burn away. Hank, always game for some activity, ran straight for the white foam at the water line. I chased behind and, for the first time, was able to explain surfing, why not to stand under a flock of seagulls, the meaning of littering and how to find sand crabs. The wind, however, did not wane and the second a single grain of sand hit Hank’s eyeball, he was done. By then, Kate and Leo were done, too. Our beach umbrella was about to be sucked out of the sand and fly into a South Bay juice bar. “Time for some watermelon water,” Kate said.