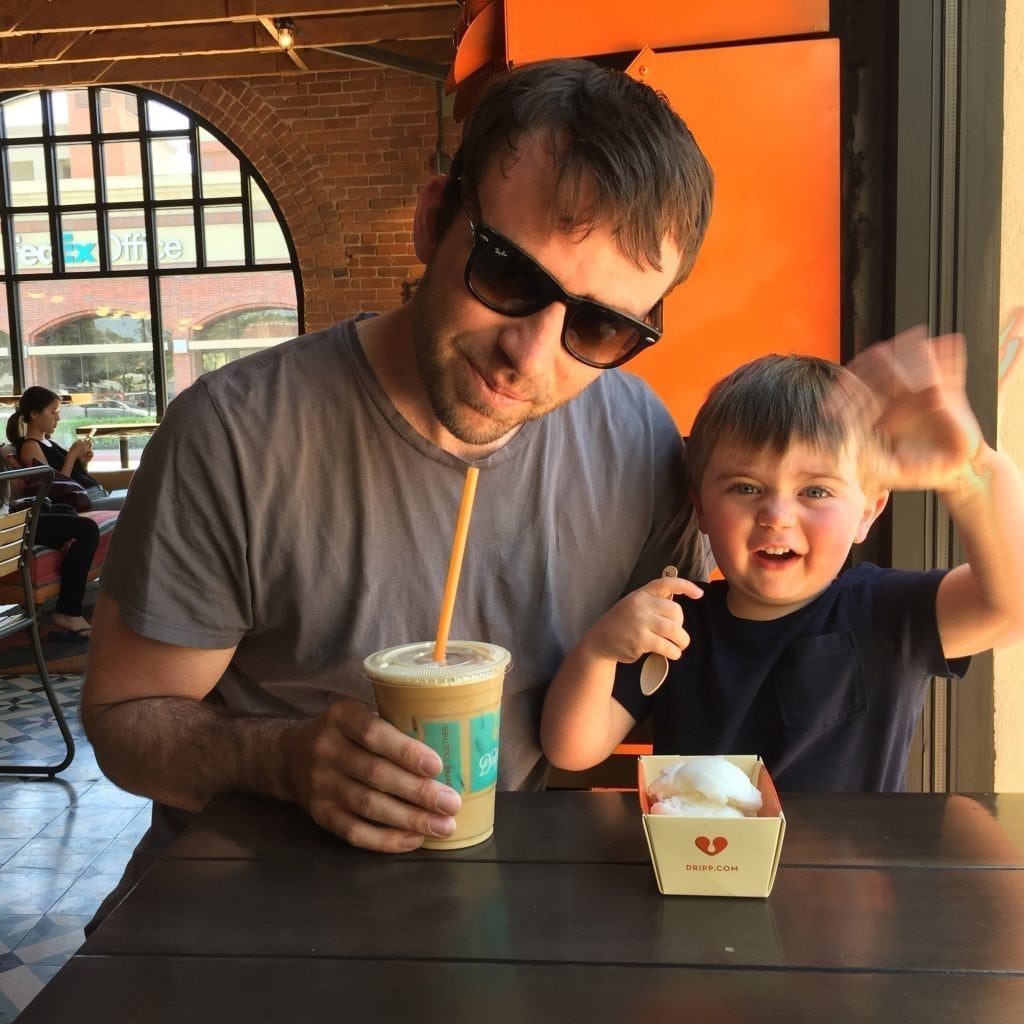 This month’s column is an exploration of Bizarro World. I’m talking about that other dimension just south of the Habra-Mirada Line: Orange County. Although the OC is just a 30-minute drive from LAX (traffic permitting), we Angelenos tend to look down on the suburban sprawl just south of us. Perhaps the annual trip to Disneyland or Laguna Beach is the only time you venture behind the “orange curtain,” but I’ve found myself there quite a bit lately because my sons’ grandparents have been caring for them a couple days a week.

While Angelenos love to stereotype the area, I’ve been exploring its beauty – a diverse populace, magnificent hikes, lovely city parks and tight-knit family communities – with my sons, Hank and Leo. Since it’s been an uncomfortably hot fall, we first ventured inside a few coffee shops for my cold brew.

There is a flourishing artisan coffee scene throughout the county that is definitely enough to keep a Millennial Angeleno appeased. Southeast Portland has nothing on the café serioso of Portola Coffee Roasters. As if birthed from a hermetically sealed hipster spaceship, this coffee counter in Costa Mesa treats its coffee with more gravity than a black hole. And speaking of black, they often won’t let you add cream. Hank prefers cocoa, so I tried to order one lean on sugar. The barista just laughed at me.

One of my first columns for this magazine had me exploring L.A.’s boutique coffee spots with Hank when he was 1. With Leo, I again have a newly minted 1-year-old, and my desperate coffee infatuation has been rekindled. Coffee might just be the only thing I really think about these days. And Leo – not being the sleep expert that Hank was – still has my wife, Kate, and I sleep deprived. But we don’t have to be deprived of coffee in Orange County.

In downtown Fullerton, Hank and I stop by Dripp. A more laid-back, decidedly Californian spot, Dripp is a coffee edifice where single-origin cold brew meets 1920’s Spanish stucco. Hank can get his hot steamer anyway he likes it here – and run amok among adoring CSUF and Fullerton College students. I can’t help but think this open and energetic spot would be a difficult place to study. They have their laptops out, but these students are posting their cortados on Instagram instead of flipping through their textbooks.

While the OC might not quite have L.A. beat on the coffee scene, it is markedly ahead in its public park investment. The kids have it good here. Many towns have created outposts where giant LEGOs occupy the landscape like the Great Pyramid of Giza and intricate webs of jungle gyms meander like the Amazon. They call these places adventure parks, and these heavenly slices of public green space are free and scattered throughout the county. I took Hank to the one near University Park, a stone’s throw from UC Irvine. Orange County is known for its gated communities, and this park is a gated community for toddlers. Hank roams securely like a “Westworld” visitor. He thinks he can do just about anything and get away with it. He kind of can. And while sipping my cold brew, I can sit back and watch him build a network of streams with model construction vehicles. Or not. He’s not going anywhere.

Irvine Regional Park, which is essentially Orange County’s answer to Griffith Park, is impressive. There are miles of hiking trails, a quaint zoo and plenty of picnic spots. Hank got to saddle up on his first horse here, though I suspect he was more delighted with the horse kicking up piles of dirt on his father than the actual ride. Parenting gets messy even in the tranquil hills of Irvine. Rubbing the dust from my eyes, I had a vision: Somewhere in a Bizarro Universe, Hank is hitching his pony to our gated pre-fab Spanish casa in Brea.