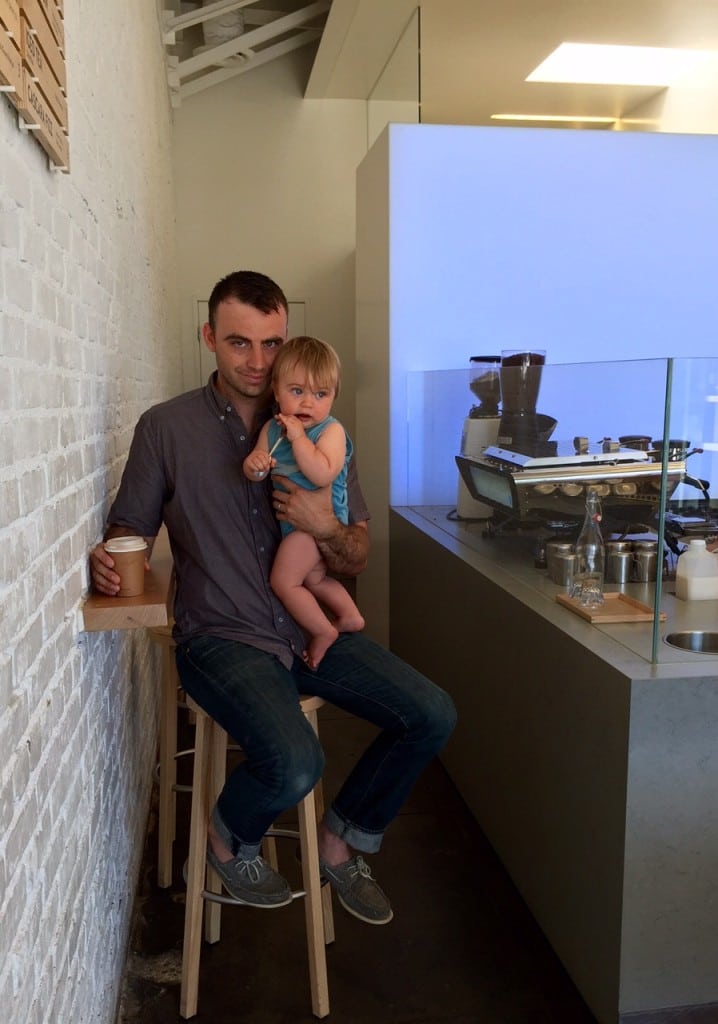 I’m tired. My son, Hank, is now 10 months old and wakes up every morning at 5:30. I used to wake up at 8:30 a.m. Those days are over. Now my alarm clock is a howling cry from the next room. Now it’s all about this little angel – and yet all I can think about is the devil’s bean.

Blue Bottle Coffee  (1103 Abbot Kinney Blvd., Venice) opens at 7a.m. (I’m there at 7:05.) From a tricked-out machine on hydraulics, they press the best espresso in Los Angeles. Try their quad Americano (that’s right, I need four shots, Dude); its brown-and-black head floats and swirls at the top of the cup, resembling chocolate and peanut butter. It is a bubbly, oily espresso that perks you up as much as it delights your palate. We’re talking notes of blackberry, caramel, and cocoa … I think. It’s too early to tell, usually. I just know I’m happy. Blue Bottle (sorry to all you SoCal cheerleaders) is out of the Bay Area and it seems that it is primed to take over Los Angeles in the artisan single-origin coffee realm. A new satellite is opening in West Hollywood. Mine is located on Abbot Kinney – the Westside’s ground zero for millennial dads with strollers and eye-bags. 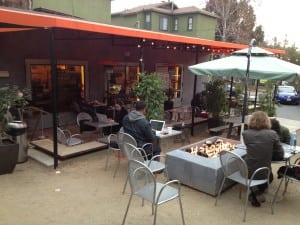 The following day, I get a late start. I play with Hank. We read some books and high-five for an hour, and I have to manage with some black tea. Nap time approaches and so a I know a drive is in order. I bee-line for Echo Park. Hank passes out within five minutes. It generally takes a good 35 minutes from our humble Mar Vista bungalow to get to Fix Coffee  on Echo Park Boulevard (located at 2100). Fix is becoming a staple for the coffee hungry Northeast side of town. They carry several local single-origin small-batch roasters. I usually carry Hank inside, grab a Times and order a pour over – something from Guatemala or Ethiopia, depending on my mood. It’s humid, overcast, the hipsters are dressed in scarves and denim, so I go with Guatemala. Nothing like a perfect cup of brewed coffee amongst the chatter about late-night shenanigans, de-flowering relationships, and unconventional living arrangements. I’d better get out of here before Hank can understand any of this dropped eaves. 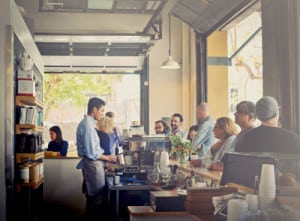 Sometimes I need a break from the militant relaxation of the Westside and the relaxed militancy of the Northeast side. Sometimes I don’t want to see Peruvian cotton, flip-flops and yoga-mats. Sometimes I just want to see and feel my city – the city of my birth. I want to soak in the public sphere, breathe a little history Los Angeles style and enjoy a fine cup of mud at the same time. For this, G&B Coffee  at the Grand Central Market on Broadway Downtown comes to mind.

G&B Coffee found its home at Grand Central Market a few years back – around the beginning of the gentrification project. Now the Market is swarming with artisanal delights, but you can always get a shockingly lardy carnitas gordita there. That’s what I had for lunch last time as I was taking Hank on a tour of DTLA. And after feeling sick, sleepy and fat, I knew I needed to hit up G&B. The baristas look official at G&B, and the bar itself looks like it was flown in from a Madrid tapas market. They make your latte to order and act like they’re doing you a favor – but they are, so it’s OK! It’s good, easy, convenient and always better than a financial district S/Bucks. Angel’s Flight is right across the street, too, but I wouldn’t recommend walking a stroller up to the top no matter how hyped-up on caffeine you are.

I went to Cognoscenti Coffee  with Hank last week, the location in the heart of the Culver City arts district, 6114 Washington Blvd. It is too easy to mistakenly pass by the gray exterior of the store. It doesn’t help that Cognoscenti is on the first floor of a post-modern industrial architecture firm. But when you enter, the baristas are warm, friendly and bow-tied. They serve excellent decaf (if you’re into that kind of thing) and great lattes (you can tell they use high-quality milk). They also carry some fantastic local roasters if you need coffee by the bean.

That was tiring. I seriously had to grab another cold brew. I guess I’m getting the hang of this fatherhood gig. Always be sipping.

Isaac Parfrey was born in Los Angeles. He studied writing at the University of Iowa. He grew up in Boyle Heights and Santa Monica, and currently lives in Mar Vista with his wife and son.