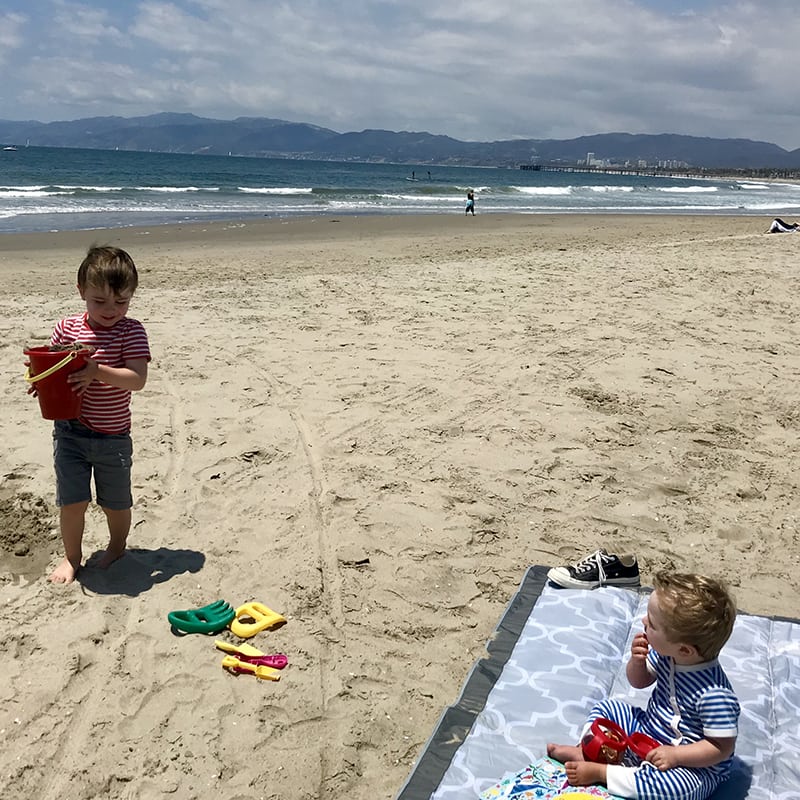 There is a stereotype about L.A. that suggests no one here works. Common sense tells us that a world-class economy with diverse industries employing millions of people couldn’t function if we didn’t, but even my wife Kate and I have found ourselves annoyed at, say, noon on a Tuesday at Blue Bottle Coffee.

“What do these people do all day?” Kate will ask. “Well, this,” I’ll say with a sweep of my hand. “Drink coffee in front of a laptop, with one tab on Facebook and the other on Final Draft.”

Seriously, though, if you ever need proof that most people in L.A. work traditional 9-to-5 jobs, try going to the beach on a summer weekend.

That was a joke of course. On a hot summer Sunday, the beach in L.A. can resemble the Wild West. Your best bet of escaping the crowds is to hit one of the under-the-radar beaches on a weekday, when you’ll be able to pull your car into a spot that seems to have been waiting for it.

Recently, I didn’t heed my own advice, however, and we set out for Zuma Beach on a Sunday. Traffic brought us to the sand about an hour later than we expected. Looking for a parking spot with two squawking boys in the back added another 30 minutes. If you do wait until the weekend to hit the beach, I advise dropping off your excitable kids and partner before you set out looking for a parking spot.

Once on the beach, all was well. My sons, Hank and Leo, spotted some dolphins and a sea lion. We dug our hands in the wet sand and carved out sand castles. But the beach was, nevertheless, crowded – and the party next door was pumping up the jams at a disproportionate volume, to the chagrin of a lady next to us trying to read her summer novel.

On other occasions, we’ve been pretty good at riding the beach wave, but as a Westside native, I am reluctant to give away my secrets. Truth is, there are no secrets anymore, thanks to the web and local sleuths like me. That said, there are places a tad further under the radar that make a family beach outing a little more bearable. On a weekday, of course.

Deep into Malibu, the locals get antsy about us outside beachgoers. Hard to blame them. The residents paid tens of millions of dollars for their beachfront homes, hoping for a little more privacy and tranquility. They fight hard to keep the beach space near those homes private.

We drove up to Lechuza Beach, just past Trancas Canyon. It’s public but not exactly family friendly. Parking is up near PCH, and you have to walk through neighborhoods to reach the slightly gated entrance. The beach itself is rocky, with some tidal pools, so make sure the tide is low when you visit with kids.

Another local gem is Marina Beach, but when I tell friends we’re headed out there, the response I usually get is: There’s a Marina del Rey beach? This is the type of incredulous reaction you want about your under-the-radar beach destinations. Marina Beach is technically the strip of sand south of Washington Boulevard down through Grand Canal until you reach the mouth of Ballona Creek. It’s just south enough to make the Venice Beach crowd seem a world away, and the lack of restaurants, shops and bars keeps the population sparse. Hank and Leo love to comment on the many yachts and catamarans as they go by. Leo can say “boat” now. Hank corrects him, “No, no, Leo, that’s a bowrider.”

Not too many of my millennial parent friends know that the city of Torrance has a coastline. There is, indeed, a Torrance Beach. And it is as different from nearby Hermosa and Redondo beaches as Marina Beach is from Venice. It’s easy to tune out the madness of Hermosa and Redondo as you relax along Torrance Beach’s quiet shore. After a long bike ride down the bay, or a drive through Palos Verdes Peninsula, we like to stop here. It’s the only beach in L.A. that faces true west. A great spot to gaze at the sunset. The windswept trees and coastline make Kate and I forget we’re in the city.

The drive back home helps us remember.